We got home uneventfully Sunday night and tucked Penn and Fiction in for the night. I went to Dover on Monday to shop for my list of things from my previous post, then out to the barn to drop off/try on the stuff I got and say hi to Penn.

Which is when I found this: 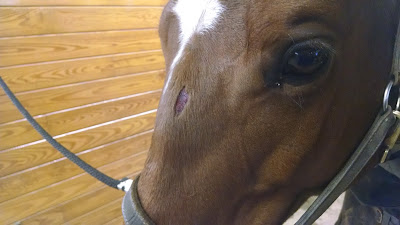 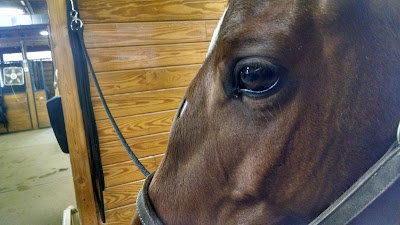 I texted a picture to my trainer and asked if I should call the vet for drugs or call for her to come out. It wasn't too tender, but there was so much swelling.

She thought it looked like he got kicked, so she said to have the vet out to x-ray his face to make sure nothing in his sinus cavity was fractured. He was breathing and acting fine, but just as a precaution.

I called the vet and sounded like an idiot, "My horse has a scrape on his face and there's a lot of swelling", but she said she'd come out after her next two stops. While I was waiting for her, I found another mark on him: 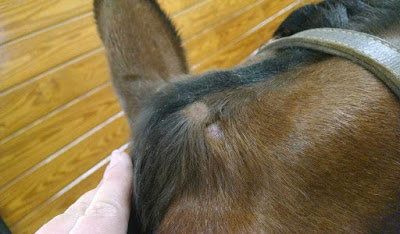 I had called BO earlier to let her know what was going on. Her husband came out and we had a look at Penn, then went and looked around his field. The original thought of a kick didn't fit anymore, not when it looks like he scalped himself too. We checked the run in, fence lines, gates and corners and couldn't find anything that was broken or had hair on it or sharp enough to scalp Penn or cause whatever happened to his face.

The best we can figure is he stuck his head through the fence, got spooked, and caught the vinyl fencing in his hurry to get his head back in the field. He must have done it right after BO left (she was there all morning and some of the afternoon) and right before I got there (about a half hour after she left).

When the vet got there, some of the swelling was already gone. She took one look at his face and agreed an x-ray would be best because of where the swelling and scratch mark were located.

I got to participate in the x-ray process- I made a baling twine halter and lead and got a lead glove to hold him. The vet took the x-ray while her assistant held the plate on the right side of Penn's face. He's such a good boy- he held very still for his x-ray and saved me some sedation cost.

Luckily, the x-ray showed all his bony structures in his nasal cavity were fine and he just had a ridiculous amount of swelling. It also showed his teeth and roots, so she checked those over (they're all perfectly healthy). I'll have to email the office to see if they can email me the x-ray of his head- it's kind of neat!

She pulled out this zinc oxide clay-like ointment that is good at pulling swelling out (it'll be great for his legs when he interferes!) and helps in the healing process. She said to use gloves to put it on (I think it has DMSO in it), and then covered it with a huge horsey square bandage because the ointment tends to get everywhere.


Everything looked better Tuesday night after work. I put more of the ointment on and covered it again. The vet was back out Wednesday for the second round of spring shots, and I didn't hear anything, so I'm assuming all is well.

Ok Penn, you had your damage incident for the year (I've found I end up calling the vet for some kind of injury once a year). No more please!
Posted by Codex Dressage at 10:04 AM

Email ThisBlogThis!Share to TwitterShare to FacebookShare to Pinterest
Labels: vet