I ended up riding Friday night instead of Thursday. I was excited to use the snaffle again. It didn't go as well as I hoped it would. Penn just didn't cooperate. I rode him inside to cut down on distractions and I'm guessing it helped, but he wasn't my usual good boy. He was bouncy off the contact and unwilling to find bend. I had none of the sensitivity that I had with the pelham.

However, a drastic improvement was his ability to accept my input. I could half halt in trot and put leg on and he'd attempt to balance himself instead of trying to run away. It would only last for a step, but he at least answered me. I could put my inside leg on and send him to the outside rein, even if it was shitty and tense. All of his work was much more uphill, which I'm sure contributed to his unwillingness to work with me ("What do you mean I have to uphill AND connected to the bridle??"). I had to be very sure of my core, shoulders and elbows. Everything in trot had to come from core and elbow, or else he'd blow through me. He tried to give me a big fancy show trot, which was a nice thought, except he's not strong enough to hold it, so he'd end up laying on my hands and getting on the forehand. Then he'd be offended when I'd ask him to carry himself.

The trot was a shitshow, but the canter was actually halfway decent. All of the arguments from trot went away, as long as I made sure to manage every step from walk to trot to canter and support with that core/elbow feeling. No excuses, just connect. I was able to get him to stand up and get off his inside shoulder, and have a smidgen of adjustability. The right was definitely better than the left.

Always breaking something and putting it back together huh? To be honest, he feels like a more uphill version of the horse I bought last August. The only downside is that he was so much steadier before we asked for more collection and uphill. It was bound to happen, I'm not upset by it. We need to more collection and uphill movement to keep moving forward in his training.

After morning barn chores, I trail rode with Hawk and another girl on Saturday. Penn is so super about the trails. It's really great because I can relax and do some Pokemon hunting while we walk. 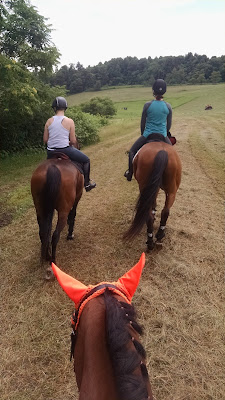 Husband has been hard at work on our driveway's new retaining wall. The old wall fell apart (old railroad ties) and it had a weird non-paved or supported section behind the side parking spot. Since we have too many vehicles, Husband is walling that section in too.


Can't wait to show you guys the final product! He has to pound some more rebar in this week, then he'll start filling in with gravel. But the wall itself it set, minus some rebar, and it's beautiful!

Saturday night was fabulous- Hawk picked me up and we went on a locally organized Pokemon Go Bar Crawl. Hawk and I are super nerdy, so this was a ton of fun. Picking up Dragonites at the starting bar, getting team wristbands (go Mystic!), meeting fellow trainers and gym battling on the street, sampling various Pokemon themed drinks, hunting down the elusive Mewtwo cocktail, and catching more pokemon of course! So. Much. Fun. We met some awesome people. The players on the crawl were just so happy and friendly.

I was out way too late Saturday night. A 2:30 bedtime doesn't help you get to the barn for morning chores at 8:30!

I decided on Friday/Saturday that Sunday would be a ground driving/long lining day. Penn can't fight me there and we have to use a snaffle bridle.

I started off by working Penn on a large square. He didn't want to find inside bend (like always), so the corners really made him. He decided to be spooky and looky at the indoor arena doors, but I was able to get after him with huge half halts on my outside rein combined with taps on his side from my inside rein. He wanted to run away (like he does under saddle), but my half halts were big enough that he had to lift his front end and move to the outside rein and find inside bend. We had some lovely leg yields back out to the wall/track. I did this to the left first. After a few rounds where he decided he'd be willing to focus and listen, I sent him out around me to lunge him with double lines.


I love lunging with two lines. There's a direct communication with each side of his body. When I lunge with just one line now, I feel cut off of unable to communicate with him. Unable to half halt, move him in and out on the circle (a whip won't move him out, he'll just run).

Anyway, I started with the outside line behind his rump, and he gave me some lovely uphill trot work. No fussing, no shenanigans. Lovely.

I moved on to canter- no reason to drill a good trot when he's getting a good workout anyway. He found his sassy pants when I'd kiss for canter- it's hard holding yourself up into canter. Especially when he wants to invert into it. He'd have a little tantrum where he'd try ripping the reins out of my hand (silly horse, I'm not sitting on you!) and then giving his head a shake before standing up and cantering like a gentleman. It isn't the best canter work by far, but he is carrying himself. He can't go more than a circle, so I plan appropriately and bring him back to trot on my own terms in a balanced transition. I can't get the outside line to stay just above his hocks in canter; it likes to slide up and be under his tail where it can rub his dock (bad). So at this point, I flicked the line over his back. I don't like doing it this way because it allows him to travel more on his forehand. We did a couple more canter transitions and I let him stretch out on the circle in walk to catch his breath.


Changed directions, repeated the square. Little bugger was spooking harder to the back door of the arena going to the right, and he got a couple sharp reminders about inside bend and leg yielding towards the door. He still wanted to react every time, but each time he got away with less. We repeated the trot and canter work, then I let him quit. He only worked hard for about 20 min, but it's more consistently hard work.

Barn owner's daughter has always wanted to learn to long line, so I handed her the lines and said, "Off you go!" He was more than capable of cooling out in walk while she tried to get the hang of it. He tried to spook and step in at the back door with her too, and she over over corrected it, much to Penn's dismay. I was cool with it though because she kept her half halts working and Penn sat the hell down and lifted his front end and poll in walk. He could probably do with some more of those to get him even lighter and thinking even more sit.

He walked her around at the beginning- she had trouble getting the hang of steering and making him stay on the wall, and keeping the right feel in the lines. I told her to manage every single step, just like you would riding, and don't drop the contact with him since you'd never drop it riding either. She said it's a lot harder than it looks! I sent her off walking a teardrop pattern- go around the short side, 10m half cirle E-X, get straight and back to the wall and ride your corner, repeat B-X. I love this exercise because it works everything- steering, getting straight, getting into the corners, getting straight again and again and again. She got the hang of it and had a lot of fun. She said she really got the feeling of using her core for the half halts and keeping her elbows bent and tucked in next to her sides (which is something she struggles with). Penn is super easy to long line and knows the job very well, so kudos to whoever taught him!


I have a lesson tonight. I'm hoping our snaffle ride on Friday and long lining Sunday sticks with him and he's more agreeable today!