In my last lesson, I was really struggling with the concept of half pass. I've always struggled with it. It was not Mikey and my strong suit- I always pushed the haunches to leading. With Penn, I'm lucky if they catch up! They trail like none other.

Sunday was quiet at the barn and I was able to ride by myself inside (it suddenly became 80 degrees and sunny and HUMID again, wtf?!), so I spent a while working on half pass in walk. Breaking it down into what I was doing. If you recall, a couple lessons ago when Penn proved to be quite the flying change machine, Trainer got after me about shoving with my left seatbone to make Penn change bend to the right (it doesn't work yo) when we were doing simple changes on the circle between canter/counter canter. I took a look at how I was asking for half pass right... and OMG, guess what I was doing? Shoving him right with my left seatbone, then laying into him with my left leg because he wasn't going right or bending right. Major 'durrrrrrrr' moment.

I did some contorting (because I am unable to put my right seatbone on it seems): turn my body right, let my left leg go back, raise my right heel to engage my right seatbone, collapse my right rib cage and be a twisted mess. Then I tried again. Who knew Penn wanted to do the right thing after all? He was all, "ohhh thank goodness" and "oh, you should have just said that's what you wanted" etc. *facepalm* Now to do it without the the contorting!

We finished with some simple canter work on a circle, but he got a bit looky at that point so, I donno. I was still happy with him though. He does want to please, I just have to make sure I ask correctly!

He got a vetrolin bath and turned back out, in full fly gear (freshly sewn too btw cause he's hard on clothes). Because we still have mad bugs, wtf? It's almost November and the flies were TERRIBLE.

I had some reports to run Tuesday afternoon that took a long time to run, so I ended up paroozing A Enter Spooking's old posts about second level and half pass, in anticipation of a Very Exciting Event Coming in November (I'm not ready to spill the beans and I kind of want to see how it goes first, but it's a super exciting learning opportunity). I started teetering between, "Ok, we've got this. We're ready for second level" and "OMG we need to repeat First Level because we are failing at everything!"

I ended up spending quite a bit of time reading/studying I Hate Half Pass and The Devil's Transition. The way Megan described half pass is just how I needed it- it's both shoulder in and haunches in, which makes no sense, but it does. You should never be shoving the horse across with the outside leg (whoa what?) and you need to maintain the cues for shoulder in (inside leg on to outside rein connection- who knew?!). Magical nonsense I say! I sat in my desk chair playing with seatbones when something clicked: In our first lesson working on it, we did shoulder in to half pass. When the shoulder in was good, I just weighted my inside leg and seatbone more and Penn went right over as if he was mind reading... THEN I STOPPED WHEN I LOST MY OWN BALANCE AND STARTED SHOVING AND THINGS WENT POORLY. Holy freaking shit. I started him off right, then started doing stupid things with my body! I was super excited for the end of the day to come so I could get on and test what I had read.

The first thing I did when I got on was test my shoulder in cues- inside leg to outside rein - where was Penn connecting to and what was I using to keep him there? That's when I rediscovered found a gaping hole in our training... Penn doesn't always go to the outside rein (and I fiddle too much to make him connect, so it's kind of fake and gee, could that be why we're struggling with it right now?). So the start of our ride was connecting to the outside rein: me making sure the correct seatbone was engaged and really putting my inside leg on at the girth. It did take some spur, sorry about that Penn. I have to undo a year's worth of poor training. As I moved to trot, Penn was much more connected than he's been in the recent past. I pulled another exercise out, one that Karen at Bakersfield Dressage told us all about last winter, and one I forgot about until now. I put Penn on a figure 8, and then went to walk across the middle to really focus on the change of bend, then back to trot.

Penn really struggled to change bend from right to left. That continued to be the theme of the day, bending left was tough. We ended up doing extra circles to the left until he really settled into the connection before walking, changing bend to the right, and trotting off again. His connection felt so much better- I wasn't doing anything except supporting him with leg. His first instinct both directions was to connect to the inside rein... something I'm sure I've helped along by fiddling too much with the inside rein. An interesting thing I found was that he wants to swing his haunches to change bend... probably because I haven't been asking properly.

Anyway, I started mixing the canter in, which is where "The Devil's Transition" comes in. I've been struggling with the canter walk, and it's been getting worse. After all this prep work though, plus the clue of "as soon as you pull on the reins, you've lost the hind end and the transition", I tried actually half halting before  wanted to walk, then asking for walk. And Penn promptly dropped into walk. Holy shit, what as discovery! Haha. We did a couple transitions both directions, again paying more attention to the left lead because we're struggling with left bend.

Penn got lots of pats and a walk break. I was blown away with how on task he was. He's been spooky, and while he looked a little, the new level of connection kept him on task. Again, go figure!

I wanted to try the half pass work again, but by this point Penn was running out of butt power. I tried it in walk anyway, aiming to keep everything brief: shoulder in to get back in the idea of inside leg to outside rein, with inside seatbone on, then some outside leg to ask for him to move across the diagonal, then back to shoulder in when one of us starting failing out of the half pass. I had to resist the urge to sit in the outside seatbone hole that's created, and to keep him moving to my outside rein (which comes from the inside leg). Holy crap was it a lot easier to ask for, and Penn never once slowed down or tried to quit (or rear).

Off to trot where I found I had to post on the right diagonal (as in right vs left, not right vs wrong) in both directions, and I couldn't sit the trot- that let me squash him with my seat. I really really want to pull with my inside rein in the half pass. I found when I wanted to do that, I put some extra effort into inside leg to outside rein to fix his bend, and it only took gentle prodding with my outside leg to get him to move over. When he'd start to fizzle, I'd ask for shoulder in again, which he struggled with and it was very leg-yield-like inside of bent shoulder in.

The half pass right was super (this is the one he's been shutting down in). He willingly moved forward into it and it was just nice. Not show worthy since he inverted a bit (he's doing that in shoulder in right now too), but he started to soften towards the end of the work and I never once felt like I was shoving him across the arena.

We did a bunch each direction, mixing in medium trot/collect/medium trot/working trot to keep him thinking forward. I lost a bit of connection doing that, so it's something to work on too. The left was much harder- he was more inclined to leg yield vs shoulder in that direction and I fought with him a bit over it. I think he was just tired by that point, so I didn't pick at it too much.

I let him stretch trot and walk at that point- I was so pleased with all the work even though it lacked bend. He tried so hard the whole time and even started to soften a little. I think I need to do a bit less with my seat- I tend to squash with my seatbones. Such a light bulb moment ride though- everything was so much better and while I still struggle with the half pass, I think I finally understand!

Half pass has been described to me as haunches in on the diagonal to get the feeling, but it's more like shoulder in and I couldn't piece that together. At all. Now I can: shoulder in uses inside leg to outside rein with inside seatbone. Then for half pass, maintain the inside seatbone and inside leg to outside rein support to keep the horse's balance over the outside shoulder, and add some outside leg to send it sideways. If you have to start piling on the outside leg to get the horse to move over, you've lost something in the starting connection. A huge 'durr' moment: if you're shoving the haunches over with your outside seatbone and outside leg, you'll never have inside bend because outside seatbone DOES NOT CREATE inside bend. Ever. 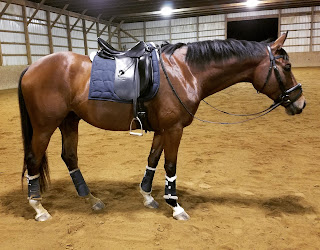 So thanks Megan! You explained this is a way that I understand!
Posted by Codex Dressage at 1:06 PM

Email ThisBlogThis!Share to TwitterShare to FacebookShare to Pinterest
Labels: half pass, training