Ok, it has taken me a stupid long time to get these out, I'm sorry.


Thursday morning was similar to Wednesday morning, except I took a couple things to the trailer in anticipation of packing up to go home.

By this point, I had already decided that I wanted to come back and take some more lessons, so I used their very cool online lesson scheduler to sign up for another two lessons 12/16 and 12/17 (there's a computer in the barn with the scheduler up).


GP Trainer had to run out ASAP after our lesson, so I started our third lesson with a couple billing questions (having never asked what stabling would cost- it was actually super reasonable!), I checked that the dates I signed up for were good, and a question about how often I should be working on the stuff we've worked on. She was like, "Are you ready for a non-answer?" She said basically to see how it goes- it's all about how he comes to play that day. Some days I'll be able to push him and some days he won't want to play and we'll just do a short fluff work and go for a walk. I told her I ask because early in my career, I had participated in a clinic with Mikey and the trainer had pushed us to be forward and find connection. I repeated the lesson on my own, to have my own instructor stop me and tell me I'm ruining my horse by working him that hard. It sounded fishy to me at that time, but it's always made me wary of overdoing it, especially on things I know are difficult. GP Trainer didn't put a number of days per week on it, but basically said it's safe to push for this each ride, but watch Penn's attitude and still be sure to mix up our ring work and outside work. He'll let me know how much is too much.

On to the work! Fear not, we didn't totally ignore connection this week as we insisted on him being more on the bit in this lesson.

We warmed up a little in trot, with her having me make him a bit rounder by flexing his jaw and poll with just my ring fingers moving the bit. Nothing overly exciting about the work, just warming up and working on the trot.

After two days of "He needs to sit more!" "Sit up!" "Don't stare at his head!" "Sit up!", she had me start to put Penn back together in canter too. After a few failed transitions to canter, she had me close my eyes and then prompted me to cue for the canter... and of course it worked well!

After only two days of asking him to sit A LOT more than he's ever sat in the canter, and me helping him by only sitting up and under myself, Penn's canter was significantly more organized. Go figure- I had told him, "I'm going to sit up and out of the way, don't fall on your face." GP Trainer was very pleased with how hard he was trying. She had me start to put him back together- sit, on the bit, forward. She stressed maintaining my own sit up, and at this point if he was going to break, DON'T FALL FORWARD WITH HIM! Keep my seat driving him forward and sitting. When he connected and tried to fall forward, KEEP SITTING UP. She had me work my ring finger to make the bit move in his mouth to soften his jaw. Cue the video.

She was careful to stress that we don't want him leaning forward into the bit- that's what we spent 3 days fixing. Maintain the uphill balance and show him where we want him basically.

Some quotes from the other direction:


We botched a downward transition to trot: "Ahhh, that's ok. It's like watching a snowball roll down a hill and become an avalanche." She went on to say, take your time, THIS IS SO NORMAL.

We moved on to trot spirals after that, paying more attention to roundness. She explained something I already knew, but was a good reminder: to check if he has enough roundness, look at his neck and see if the top neck is blown up, ear to whithers.

Some fun quotes from the video:


She had me put his shoulders in, nose out when tracking left- this made him him straight - on the spiral in and out. To the right, I could put him more even in my reins. She said his neck gets a bit short here, but to keep it that way because that's where he needs to be right now. If he make his neck long and flat, he can't sit down enough to sustain it. A judge has to come up with a reason it's not a 10 movement, and if the neck is too short but everything else is good, then it just has to be that way so that the work is good.

These were definitely the most effective spirals I've done in a long time (they REALLY helped at home when I remembered to put the lower leg tips from day 2 into it).

I think his work needs more forward, she said the canter is a bit 4-beaty in this work, but let that be for now as he learns to carry a more uphill balance.

Something I liked about her lessons were that while we never seemed to cover a ton of ground (aka we're not going GP tomorrow), Penn and I were both sore and tired at the end. Lots of small steps. We cut our 3rd lesson a hair short- both Penn and I were tired. All of the lessons put quite a bit of pressure on Penn, which he handled wonderfully- she was very happy that he continued to try, day after day, without any kind of tantrum.

She said to give him 3-6 months of this kind of work, and he'll be strong enough for Third. She said "I know that's not as fast as you wanted..." but in reality, I was hoping to struggle with second for the second half of winter and then come out in May (6 months from these lessons) and do recognized second level tests, then put Third in towards the end of summer.... so this is actually a lot faster than I thought!

While we were talking about him being a bit tired on day 3, I told her I wanted to do 3 days of lessons because I tend to overdo it on my own after day one or two, and wanted a third day of instruction to fall back on, (she got a laugh out of that with a perfectionist in dressage joke but completely understood). She said she likes to have horses in for training for 3 days, or 3 weeks. Usually the time in between is sketchy and bad, and she hates turning a horse back to its owner at the 10 day time because things have usually taken a turn for the worse and it's not at an upswing yet. That's actually a bit meaningful for me, because we certainly had struggles in that time between these lessons and now. It reminded me that we would have a downswing and that's ok.

I really enjoyed all of my lessons (obviously, I signed up for more), and I came away with so many good takeaways in 3 days of lessons. Some of it I knew, but obviously needed reminded of. I'm excited to see what the next steps are! 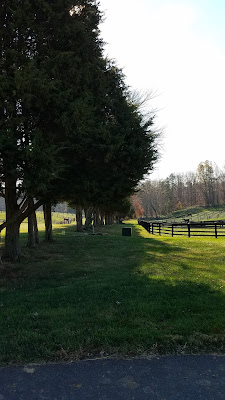 I took him for another walk before untacking and packing up. I did take a bunch more pictures of the property when I went out to get Penn from the field before wrapping him up and taking him home.


It was a long drive home- I ended up taking a nap at a rest stop. While everyone at GP Trainer's barn were joking that Penn would be happy to be going home and away from work... but I think he would have been happy to stay... he umm... was quite grumpy when he got home. Like, excessive grumpiness. To the point where I got a bad report card from the BO, haha. He was mostly being a problem when they changed his blankets. He's always been a bit snatchy and bitey about blankets and saddle pads, but this time he was making a bigger effort to actually connect with a human. He and I had it out two days after we got back when he actually connected with my sleeve. He was notably better after that. I think he enjoyed being able to hang his head out his window, and he enjoyed private turnout on a lot of grass (our fields are a bit chewed down now).

Things have been up and down since we got back and I've been sick and away, but I have a new video clip from Saturday, and we did some other fun things that I want to share too!
Posted by Codex Dressage at 7:00 AM