We had beautiful weather for our February trip to GP Trainer- 60's and sun!

I got to the farm a bit early and was able to watch the tail end of a lesson with an Intermediare I student who is working on riding Grand Prix late this summer. I thought this was super interesting and want to repeat it back for anyone having trouble, or for if I ever have this problem, and I just thought it was an interesting solution. She was working on the canter GP zig zag, but her horse kept anticipating the change and then her next half pass suffered because she never got the haunches behind the shoulder again. GP Trainer had her screw the count for a moment and do the following: half pass, then put the horse in the new half pass's shoulder-fore position, while holding the original lead. THEN she could ask for the new lead and the new half pass. The horse listened well at that point and they went back to the zig zag but with the last few strides being straight, shoulder fore, new lead. It got a lot better and her half pass covered more right/left ground since she had the shoulders ahead of the haunches at the start each time. I also got an interesting saying for how to get your butt to stick to the saddle, especially in canter when we tend to bounce out...

Sit on your butthole.

Seriously, go home and try it and pair it with pulling your belly button into your spine. It worked super well for me, so try it and report back!

We started our lesson by showing GP Trainer where we were at- trot work was good but the canter was still a struggle for the simple changes. We talked briefly about the schooling show and she gave me some tough love.

He has a 3rd level trot, no problem. He still has a 1st level canter. The two do not average to 2nd. No more showing 2nd and 3rd until we get canter sorted out (little does she know we already entered two more schooling shows since I had to send in the entry back in December- which I am still going to ride in- more details to follow on that in a later post).

First we attacked the canter. Penn does not have enough jump or sit in the canter. So back we go to me sitting up and back as much as I can (leaning behind my vertical just won't happen for me, I tend to ride more forward), and really lift his front end. We found the proper canter quickly to the right (it felt like we were not covering ANY ground), and then we put him on a 10m circle to ask for even more sit and then walk.

We're basically working on him taking longer slower steps with his hind legs so he's "not so scrambled eggs." Lol.


We had a super finish to the right lead work:

The left lead is a disaster. It is so much harder for him. I'll just leave this video here for you. Listen to GP Trainer in the first part of the video, then you can skip it (I'll pull some gif's out). She basically says these issues are the things no one talks about- the absolute struggle and hot mess that happens and the side effects (losing the quality of the walk while you sort out the wiggles for example). She also stressed, "Do not despair. This will pass." (she had to reassure me the next day that I was not going to ruin his walk because I was horrified watching the videos)


We spent a LONG TIME in walk between canters because I was fighting his wiggles- the haunches move, the shoulders move, he walks like an f'ing cat with his front legs, he drops any connection to the bridle- it all raged like crazy as an evasion to sitting and connecting to the bridle while walking. GP Trainer stressed that I have to wait him out. We will win the fight by simply outlasting him. GP Trainer would rather I focus on having him straight by a relative point in the distance in front of me, rather than straight right now, because it keeps a focus on moving forward within the walk and I'll actually get straight faster (this point took me the entire weekend to understand).


Half Pass Made Easy


She said we could address my half pass issue- basically Penn takes me wherever he wants in it and I have very little control over where we go and if the haunches lead. She had me think about it like this: Turn on your diagonal. Ears, chest and hips are all pointing towards the end letter of your diagonal (our example letter E). Take the first step on the diagonal, then ask for haunches in, pretending that diagonal line to E is actually a wall. Chest, ears, and shoulders stay pointing at E, outside shoulder stays on the line to the letter, while the hips come in. While the shoulders stay pointed at the letter and outside shoulder stays on the line, it is very hard to get the haunches to lead.

Video description of GP Trainer walking out the explanation for the first two min, then we actually get rolling at the 2:55 mark.

Holy crap guys, doing it this way was EASY and FUN. I use basically no outside leg for it, he simply went and it was amazing. Since this lesson, both Penn and I actually enjoy and have fun in half pass- he gets very swooshy and seems to really enjoy it (it's probably the one thing we both go, "Weee!" in). 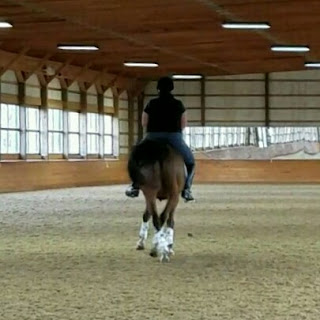 Tough love in our first lesson this weekend. Tomorrow, I bring a "Let's Do This" to the party after getting to watch my videos from this lesson and we keep on building.
Posted by Codex Dressage at 7:00 AM