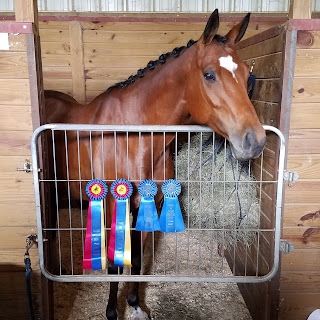 If you're friends with me on Facebook, you're already aware of the above information. There should have been a #bigfishsmallpond tag on there too because it's true, but oh well. We had a great day, and it would have been great at any show- schooling or recognized.

Seriously, if you're not into watching my videos of dressage tests or lessons (not offended, I promise), these are the ones to watch, if you watch any on this blog. I'm so proud of these tests. I'm sure in a year I'll go, "eww look how bad that was" but right now, I'm excited to watch them.

We went to a local schooling show on Mother's Day (and my mom was thrilled to just go and watch Penn and I do our thing, and was tickled pink that we did it well that day). This show is hit or miss with the number of competitors- sometimes there's enough people to fill the day from 8am to 6pm. Sometimes it's small like this time when it went from 9am to 1:30pm. They usually don't have many riders at second or above, but this show was pretty equally turned out across intro to second level. There may have only been a handful of riders in each test, but every test from intro, training, first, and second level was ridden at some point during the day.

I had to borrow a trailer (small slant instead of my relatively spacious straight load) to get to the show, and maybe that had Penn a little frazzled from his normal travel state. I got on him to warm up and he was more spooky than he's been in recent past. Like, someone was pulling weeds 40 feet away from the walk to warm up and he had a literal meltdown over having to "pass" them. I've been working hard on Cowboy Dressage Trainer's relaxation technique at home, and I warmed up with my serpentine plan and bouncing him from one bend to the next... and Penn really relaxed. Hooray, the day was saved!

I knew Penn was working on a whole different level from every other horse at this show partway through my warm up. He was relaxed, forward, bouncy, and through. The horses I saw in warm-up... well they were giraffing, lacking impulsion, bridle lame, and faking connection. One rider was almost laying on her horse's rump in an effort to do... something. I've never seen someone lean back so far. My mom thought she was going to fall off her horse backwards.

I talked to one of the moms at this show and she was dismayed with the scores, which I understand. Most were in the 50s and by the end of the day, there would be one in the 40s too. She was like, "You just have to be happy to break 60% today! This judge is harsh." I think the judge was probably spot on, but probably harsh for a schooling show. I'm pretty sure by the time I came around, she had already scratched out her eyes, so nice test riding was probably like getting some visine. I think she might have been a bit generous at times in my tests.

I don't think his first lengthening trot should have gotten a 7, but she nailed me other places where she should have. I'm so super pleased with my 10m circle accuracy- I missed both at the recognized show and these ones were spot on. I have to work on my halts- he was dead square and then stepped back a couple inches. I'm happy with my canter one loop accuracy since that was a miss at the recognized show too. I need to work on the canter-trot transition at A at the end of the test because he anticipates it and ends up breaking early instead of holding the canter like I want him to. I'll have to start cantering past A when I practice at home. I think we could carry a bit more step in all gaits though, throughout the entire test. All in all, I was happy because it was a solid, steady test and Penn stayed very relaxed.


This test was a "fuck yea!" in terms of accuracy (for the most part lol). Hitting centerline on the 10m circles, one loops, and the halt at X happening with his shoulders ON X. I swung wide turning left at C in the initial centerline and goofed the canter-trot at A at the end. I think the freshly dragged arena helped- I know my centerlines are straight and I could use my own tracks as a marker for the line (only one horse rode it before me, and she swung wide on centerline too, which I think let me go wide too).


I was so excited to get a run of 7.5's for the collected marks! 1-3 ended up scoring a 70.735%, praise from the judge at the very end (and a comment of nice braids, which was great since it wasn't just "oh at least she did that well"), and we won the class by 17.353%. Like wow, that's a lot. I did see the second place test, and the woman surprised me with the issues she was having- she also does recognized shows and scores very well there at first level. She just had a lot of issues with breaks from the canter work and went off course once. She must have had a very off day.

I got off Penn, loosened his girth and unbuckled his flash and noseband, and took him back to his stall to see if he wanted a drink. My next ride was in a half hour, so I didn't want to put him away, but I wanted him to relax. He wasn't interested in drinking, so we stood and watched a couple tests before going back outside to fix his tack and warm up a second time.

I had a really cool feeling moment as I did my courtesy lap for 2-2- I asked very gently for SI right from a very straight trot and he simply floated into it. No break in rhythm or anything. I may have grinned.

I think there were even more generous judging moments in this test because the final trot work felt like rubbish to me, and Penn simply wasn't going to turn up the final centerline and I had to drag him there via inside rein, yet both got good scores. I lost Penn's attention after the walk work- the wind was really picking up and banging the arena doors (you can hear it throughout the test in the background). For lost attention, it wasn't so bad! 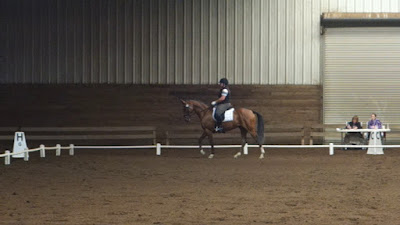 I don't think his medium trot was enough either time. I love how suppling the SI is in this test though. Travers is hard for us (it suddenly went to hell in the last few weeks and the ones in this test are far superior to anything we've done in the last month), and the turn on the haunches aren't very good (they've gone to hell too, especially the one to the right). The left lead canter's 10m circle back to E ended up small from the aforementioned loss of attention. I asked for the turn and thought nothing was going to happen so I was like, "Let's just get there", lol. The left lead counter canter looked so good... then he broke since I had too much left bend and not enough leg. I had to make a snap decision about trying to get counter canter back so I could attempt to not completely blow the simple change... well I got two 4's (the 20m half circle and simple change) but I don't know how else I could have ridden it without getting even fewer points. The right lead was spot on. I would like a bit more roundness in the 20m counter canter half circle though. He totally tricked the judge in his final halt- she said it was square and he was resting the left hind leg again! Like 1-3, this test could have been ridden more forward.

And now a GIF attack!


The judge commented in the test to make my turn on the haunches closer to the walls, and to collect the walk more before them. The collecting is in the test instruction, I just seem to have forgotten that part. But I have let the turns creep closer to centerline than they should be.