Ok, show of hands. Who knew the Dover Medal program was ending this year? 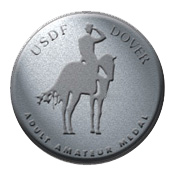 That doesn't align perfectly into my plans! I had planned on riding the 2-3 Medal classes and 3-3 all next year until Penn was ready for 4th... finishing my 1*/2* centerline ratings, Penn's second and third level performance certificates, and hopefully winning a Dover Medal along the way.

Obviously if I want a Dover Medal, that can no longer be the plan. I have one more recognized show weekend before championships (champs is not the place for me to attempt to get a Dover Medal!). Since this upcoming show weekend is conveniently two separately numbered shows, there's two Dover Medal classes.

Of course, I snail mailed my entry before I found out about the Dover Medal Program... But the bright side of snail mail is that I don't have to pay an entry change fee since the secretaries don't even have my entries yet! (I sent emails and extra checks)

Anyway, that meant I needed to do a run through of 2-3 to see what I was working with. I haven't actively worked on counter canter since June's recognized show, only flying changes (swapping them out for simple changes or changes through trot when I need to mix it up).

I set up a dressage court in the outdoor this past Sunday, which ended up too narrow for the length so some stuff was awkward, and went to it to get a baseline: (the video was taken up and down and had a lot of shake, so this is cropped and stabilized, which is why it looks funny)

I made plenty of mistakes: the trot needs more power/forward/step/impulsion, and it needs to be not BTV. The TOH needs to be better, the halts need to be better, but the canter work was surprisingly good and uphill (until Penn got tired). I used my leg off technique for impulsion as I went into the first serpentine and Penn misinterpreted that as a cue for a flying change, hence the bobble starting that movement. In the first simple change, he went to hop immediately back into canter... I stopped him, then positively nailed him with my left spur for the right lead. I had to spend the time before the next medium apologizing to him for my rudeness.


Overall, I would have been happy to have that go down centerline! Would it have won a medal? I donno.

I scheduled a lesson with the local dressage trainer at her farm for Tuesday this week. She has a standard size outdoor court and an eye for test riding. I emailed asking to work on 2-3 because I decided to enter it on a whim. #3weeksisplentyoftime

She was immediately thrilled with Penn's topline. She last saw him about 2 months ago and thought he looked good then but a lot better now ("Whatever you've been doing is working!"). She also loved my new "fun button" that I found in walk: Penn sometimes comes out laying on my hands, which pissed me off to no end the other day. I gave him the kind of half halt I'd give him in the canter to sit the fuck down now (it's a motherfucking big one), leg slightly back and on lifting his barrel, then a few sharp taps on his hip with my whip. He makes an angry face, but lifts the front end and sits a bit more. DT thought it was great, and said I should start playing with half steps using that in trot (I can already feel a piaffe wanting to come out, but I am not pushing the button that hard for a few months yet!). She warned me to be careful with his walk- it gets a bit unorganized when I overshorten it.


We went right into what I would do to warm up at a show, but then stopped to mix in some turn on the haunches work:


For the trot:
In the canter:

Off we went to the test!

Nothing much huh? Lol

We reviewed the haunches in after the test and added more angle, but by then Penn was pretty beat. She was thrilled with how his canter was looking- like night and day from when she saw him last. It's so much more uphill.

So that's the story of how we entered two more classes at the next show and took a lesson I never planned on taking (which was very beneficial). I might take another one before we go to Loch Moy, but we'll see. The next few weeks get tough for me to do anything extra as we gear up to finish my bronze and then hopefully smoke them at First Level AA Championships by riding a third level horse.
Posted by Codex Dressage at 7:00 AM