Aka, "That time the baby dinosaur stuck in a tar pit was still a big fish in a small pond." (shamelessly stolen metaphor from Emma)

Thank you everyone for the condolences. My grandfather was 98 and had an incredible life. He retired at 55 on an incredible pension. He and his late wife spent their years of retirement visiting over 100 countries on incredible trips. We traveled to NJ to lay him to rest in a Jewish cemetery next to his wife. We sat shiva for the rest of the week.

After the disaster that was 2-3 at the recognized show, I needed a confidence boost before championships. I entered 1-3 at the local dressage venue after making sure the secretary could work with my limited schedule (a shiva service was in the afternoon of the show), and off we went. 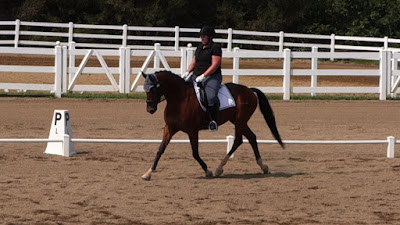 While I was doing funeral things after the recognized show, the vet was out to give Penn his fall vaccines, write up a health certificate, and check out Penn's coughing. He had a normal temperature, no abnormal lung sounds, and she agreed it was probably allergies. She left him antihistamines, which he started getting the Thursday after the recognized show. Penn's coughing was much less by this adventure- it was mostly sneezing and he was able to tolerate stretching down and back up with no coughing or sneezing fits. So I think in the future, I'll be getting him some seasonal allergy supplements to try to head this off before it gets this bad. He seems to have coughing issues each fall and spring. Of course, this particular antihistamine is a USEF banned substance (as are they all), and not only is it banned, I need to fill out a drug declaration form when I check in at Championships because it can still show up in his system if he received it within 7 days of the blood/urine draw (even with the 24 hour withdrawal period). By the way guys, feel free to call the USEF drug number- they are super helpful. I've called a couple times now!

Anyway, Penn got his warm up cough and sneezes out, and I should have put a little more effort into making him hold himself up. He felt stuck, but I didn't put out the effort to unstick him because I was worried about making him tired, and I thought part of the problem might be the deep footing.

Anyway, off to the test:

My first thought after, "OMG, we are completely screwed for championships. That was completely insufficient and thank goodness I didn't ride third here, because it would have been the shittiest score ever." Not only was he heavy in the hand and tense and resistant, we had made 3 major blunders. Cantering in the first lengthening (seriously, wtf? How long has it been since we've made that mistake?), bungling the trot change into scrambled eggs (I pushed him down the diagonal and then said sit and come back and he told me to f-off), and then him breaking to trot at the end of the second canter shallow loop. On top of those, he felt like a dinosaur stuck in a tar pit- he needed more oomph and I wasn't finding it. 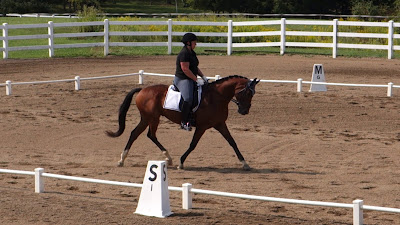 Well I know what lesson he's getting before we go to championships- the legs off, pony club kick lesson! That way I have a back up plan for if he peters out on me- take a leg off and he'll dig a bit deeper without the kick. That and a metric shit-ton of canter-trot-canter changes. And paying extra attention to connection. 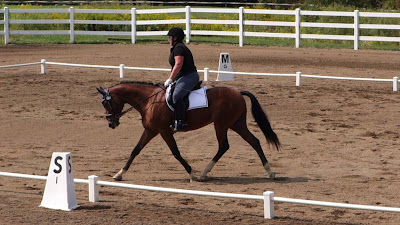 I was honestly surprised at the 69.411%. Really? Was she blind? Did she not see my baby dinosaur mucking about in the bog? Four 8's, seven 7.5s, eight 7s. 19 of the 27 marks (collectives included) were 7+. The 5 on the shallow loops (double coefficient) hurt the most I think, but I think she was a bit too generous even with a 5. I mean, the loop was great, and he broke at K. I donno, maybe I'm being overly critical? I look at it and go, "That was not third level quality" and my basis for first level quality is now super super skewed. 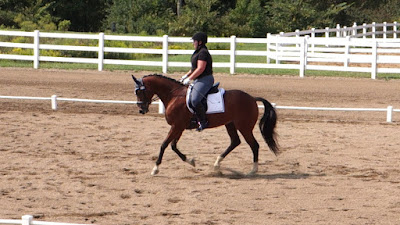 It was of course the highest scoring First Level AA test (and Open/Jr/AA First Level test if you want to know). Cue the: "OMG you got pretty satin, just be happy already!" I think that's how you know you're really after the score and how things felt I think. Win blue and tri-color ribbons and it's still not good enough!

Though I have to say, it's pretty darn cool to have a meh feeling test score a 69%. 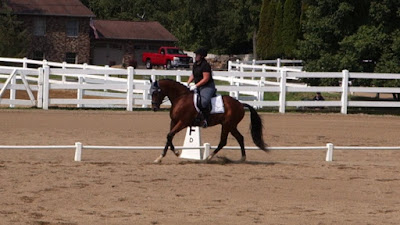 I was still quite nervous- this judge was a bit generous with everyone I think. I know I am expecting 3rd level work in a 1st level test, because in reality, that's what I need to do really well at championships. However, my championship test is being judged by two people I've ridden for in the past and I found them quite fair, if a hair generous. Between the two of them, they've given me a 69.063, 68.971, and 68.088 at first level. I haven't seen the one since last year, and I saw the other in June. They both seem to like Penn and reward steady connection. 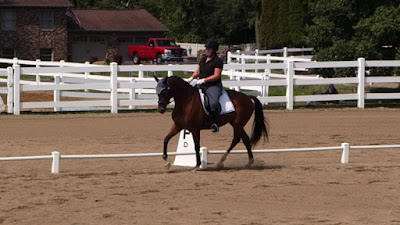 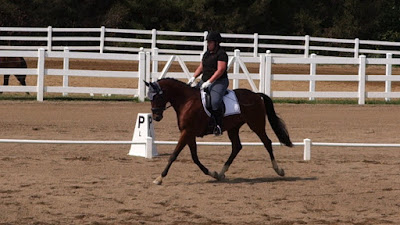 Next up in my stream of posts, Championships!
Posted by Codex Dressage at 7:00 AM