Ahh, I had much needed lessons this past weekend!

Throughout December, most of my rides had been “OMG how did this horse ever get through 3-1, because I couldn’t get him through T-1 right now” and “I think I’m going to give up dressage and take up goldfish keeping.” They were filled with despair and I wanted to just send Penn away for training until he could horse properly again. I came across GP Trainer’s “Embrace the Suck” article she wrote a while back when I was paroozing one of my FB groups. It helped remind me that this too shall pass… eventually.

In the meantime, we made some improvements like saddle fit and body work, but I still sent GP Trainer an email that went something like this “Despair, horses are stupid, I’ll be at your farm two weekends in a row and was wondering how much it would be for Penn to sleep over all week and one of your assistants can school him?” The price to stay for the week with training rides Tues-Thurs wasn’t bad, but it was still more than I pay for a month of board (after I work off part of my board), so it would cause some hardship. I told her let’s see how our lessons go, but I’ll make sure to bring everything he needs to sleep over all week.

This weekend was beautiful for hauling and it was warm, so yay!!!! I really lucked out on the weather for this trip. So much weather misery in the last few weeks and then it was 60+ degrees at her farm.


Penn came into our Saturday lesson a bit frayed; he had what felt like a pony trot- quick and short, not what he normally does. We went through our warm up of walk and trot on the serpentine, then added canter and simple changes (which were much better and I need to remember to sit down through the entire downward- I’m popping up before he’s actually walking and so he takes a trot step). GP Trainer said, “I’m not seeing disaster. I know you want him more uphill, so would I, but he’s much more engaged than when I saw him a month and a half ago.”

We took a quick break and then got right to the meat of the lesson: I was having a lot of difficulty with his right to left change, and with the canter half passes.

GP Trainer: OK, go to the canter and show me your half pass.
Me: Ok great.  **Goes to right lead canter**
Penn: **Responds beautifully**
GP Trainer: What’s wrong with that? It was beautiful.
Me: Nothing. He usually does the first one well, and then gets stuck in the next one and it goes downhill from there.
Penn: ** does three more good half passes**
Me: …
GP Trainer: Straighten and flying change!
Penn & Me: …!!!!!!!!!!!!!!
GP Trainer: I see, usually when people say they’re having trouble with the half pass, the haunches are leading, which yours aren't. You don’t have a flying change or half pass problem. You have a canter problem. The same canter problem as before, just in a new and horrible manifestation of anti-self-carriage in canter. (Ok, so I may have pieced a few sentences together from throughout the lesson for effect, lol)

This is where things started to deteriorate a bit, which is good. This work is hard, and Penn finally is voicing his displeasure over things being hard. GP Trainer: “He’s been a pleasant and mostly agreeable creature for a long time. You were due for this.”

I bought myself a very long dressage whip after GP Trainer was here in December, which I made sure I carried in this lesson. She had me keep it in my left hand for the half pass right, but when he started getting stuck and shutting down in the half pass, tap tap tap on his left hip to keep the left hind leg coming, which would keep the half pass coming. We’re not beating him into it- it’s an annoying tap tap tap. I also needed to “hook him” under the right rib cage in the right half pass in a “Lift this rib” way.

Once we got the half pass moving again, she had me straighten and try to do a R-L flying change again after the half pass right. He did give me that change, albeit one stride late behind. He got praise and could walk. GP Trainer said she wanted him doing the change out of the half pass to limit his ability to launch into/out of the change like he wants to (see above gif of frustration, lol).

I would cue for the right to left change after the half pass and he’d simply trot. She had me tap him once in the change to keep the canter when I asked for the change because trotting instead of changing is unacceptable. He’s basically conning me into letting him trot when I ask for it. He must try harder to give the right answer!

He wasn’t always giving the change, so she had me CC him into the corners, then apply whip with the change cue. The first time I asked like this, he changed up front and then changed behind a few strides later. He got to walk and catch his breath, but he had to stay on the bit. She had me put him back in right lead canter tracking left (CC), and it took me the entire long side to get him back to the CC. He fussed and danced and pulled and picked up the left lead. She wanted me to change at C, but he ended up breaking, I kicked him on, and he picked up the left lead. She was in the process of telling me to trot and CC when I somehow kicked him into changing to the CC. She was like, “OK, carry on! Don’t stop!”

We had some more bumbling problems and took a quick walk break to reset, and had an interesting conversation about the problem. I’m having trouble with this change mostly because I was afraid of him ducking down and bucking, which he is prone to doing and has gotten more aggressive in his bucks lately. So instead of finding self-carriage in the right lead (which would prevent bucking), I’m holding him up and not giving him anywhere to go… so he’s not changing and if he does, I’ll probably end up MAKING him buck because he’ll need to to get his hind end swapped.

GP Trainer: You have to release the reins a bit and make sure he’s carrying himself on the right lead before you ask for the change.
Me: But I’m afraid he’ll end up on the forehand and get his head and neck down and then buck me off.
GP Trainer: I’m glad you said that! You have to be able to let go of that inside rein to give him somewhere to go. He has to be free to make the mistake and tumble onto his head. Sit up like the Queen of England and kick on!

Once I let go, checked the self-carriage, sat up like the queen, and tapped him on the butt with my cue for the change, he started offered a smooth, one stride late behind change. He promptly ran off with me, but GP Trainer said to praise him for the effort and let him walk.

Basically, in the half pass and the changes, I have a self-carriage in canter problem, not a half pass or change problem. He gets stuck in the half pass because it’s hard and he’s talked me into believing him when he says he can’t do it, and same thing in the right to left change: he’s talked me into believing he’s not strong enough to even keep cantering, then he talks me into holding him up. She called him very passive aggressive in his naughtiness, lol.

We did a lot of canter in this lesson, and gave him a break before touching the trot. By this point, he was a bit frazzled from all the tap tap tap I was doing and so the trot was tense and quick. GP Trainer said, “Ok, let’s do trot/walk/trot transitions within SI and half pass, zero rein aid.” He was not having it. I had to use a rein reminder the first few times to say, “Hey, you can’t blow through me.” Doing the transitions within the SI and half pass really kept both of us honest about the reins, and gave the transitions constructive places to go. They were also super hard, haha.

I briefly mentioned near the end that I had tried a double on my own and it has been going well. We’re both much more polite to each other. The saddle fitter that fixed his saddle also does some double fitting, so I had her look at him to help pick the right Weymouth. She was like, “Great! Next time, bring it and we’ll use it.” I was like, “Well I do have it here, but we’d never talked about using one…” She said, “That’s fine! Use it tomorrow. I encourage students to try them out and see what happens. Some horses go better in them, some don’t. Some you think won’t tolerate them do well, and some that you think will be great in them go absolutely horribly in them. Some horses are so strong in the snaffle that they need them [her last GP horse and a previous FEI horse who is now an absolute saint needed them]”.

She gave me a big warning about if he gets strong in the double, there’s really not much we can do to fix that. There’s no bigger bit and I need to be super careful. I assured her I do not want it to be a band aid. Mikey’s double was a bit of a band aid. I want it to be a tool that helps and adds to the picture. I’ve only been using it once a week or so to make sure he continues to respect both it and his snaffle. Basically, I’ll stop using it if he stops respecting the snaffle. In my head, if you use a big bad piece of equipment and when you take it off and go back to normal equipment, if the horse isn’t improved from before the big bad, then your big bad piece of equipment is a band aid, not a tool. So far, Penn has been improved in the snaffle while maintaining respect for the double, so once a week it is.

We worked almost the full 45 minutes, with minimal breaks, and since it was 60+ degrees, Penn was dripping sweat. Like, he was sweating from above his eyeballs and his girth was a foamy mess.

I got him hosed off and dry (thank goodness I brought a cooler even though it was going to be warm! He was shivering after I hosed him), then put him in his luxury stall for the night... lucky duck got a stall with a run, which he completely adores. 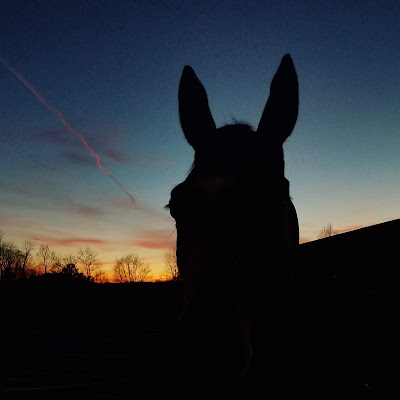 Next time, we have our first lesson in the double with GP Trainer!
Posted by Codex Dressage at 10:12 AM