I never wrote about my lesson weekend on 3/10-11, which is the precursor to this whole new saddle episode, lol.


Overall, GP Trainer was thrilled with the progress I had made in just 3 weeks on my own at the end of winter. She rode him first like she did when I visited in Feb 2018, and commented, "This is a completely different horse!" He was holding himself up more consistently, he was lifting his shoulders, all was awesome and we had a great weekend of learning, and I started getting quiet clean changes without a lot of fuss. The ability to shake him off the bit (aka not leaning and Penn has to hold his own head up), completely disrupted his ability to bolt or leap through the change. Go figure right?

Everything was awesome until we got home that is. I noticed Penn was exceedingly touchy. He didn't want to be brushed ANYWHERE. His neck, arms, girth, back, hindquarters, gaskins. He was extremely grouchy. I was sure he was bodily sore, but I opted to call the saddle fitter that helped us in January to make sure his Stubben still fit well enough... because it looked sketchy to me.

We had decided in January that she could get his Stubben 1894 to limp along, but it wasn't an ideal fit for either of us. Luckily, the Fitter was coming the following weekend (3/17) and had time to see Penn.

She immediately confirmed what I feared- Penn had packed on a lot of muscle between January and March, mostly the lifting of the neck, shoulder, and back kind. The fit wasn't terrible when he was standing, but as soon as he lifted his back, the saddle needed to be the next tree size up and pinched him. She couldn't shuffle the flocking in the front panels either- if she removed some, the front of the saddle would sit on his whithers. 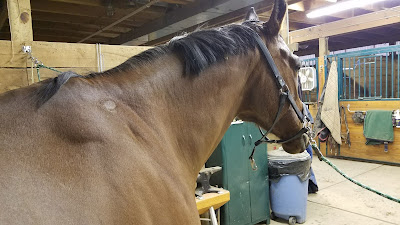 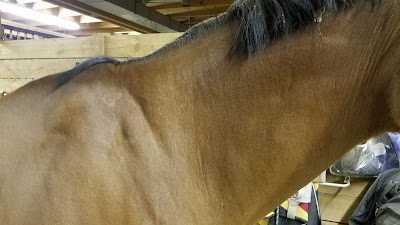 I hadn't asked the fitter to bring any saddles with her because I was hoping we could still salvage my Stubben. We talked about options and budget, and she wanted to see him go in a Concept Tree. She happened to have a 17.5" Hastilow Concept Elevation dressage saddle (with royal blue patent piping and other royal blue patent) in her car for another client to try, so we popped that on Penn just to get an idea of how he felt about it.

The darn horse LOVED it. He was freer in his shoulder, happily lifted his neck and back, and maintained his self carriage. He gave clean quiet changes left to right, and early behind changes right to left with some exuberance. He went easily forward at the canter, and came back beautifully. He had a clear 3 beat rhythm at the canter, something he struggles with.

I also loved it. We talked about how seat size doesn't necessarily go off of how big your butt is, but rather how wide set your hips are (seatbone to seatbone). Femur length plays a small role, but the blocks you need are based more on that. I didn't find the 17.5" saddle uncomfortable at all. It has a deep seat, which allowed it to also have the narrow twist I like. The way the seat is shaped also made me really sit. It didn't tip me forward or drop me back, just encouraged me to sit way up and down. It also let my thighs and legs hang down, and I easily put my entire leg on Penn, thigh to ankle. I can only describe it like sitting in a bucket that supports you in front and behind your seat, encouraging you to sit up in the shoulder and down in the seat. The leg just hangs nicely right out of the bucket, falling against the horse's side with ease.

Unfortunately I couldn't have the 17.5" (the fitter did think I'd find the 18" more comfortable, plus the 17.5 was in the car for another client to try), so I had to make another appointment with the office. There was a lot of stress with that- huge travel fees for me, dodging lessons and weather (uh, hello 8" of snow that week), but we had an appointment the following Friday (3/23).

I rode exactly once between that wonderful ride and the next saddle fitting. Penn wasn't as happy, I struggled to sit up, and we fought each other. The only good thing that came out of the ride was this pretty video clip (courtesy of my SoloShot3, which has been having issues since I updated it... sigh.)

I was terrified at first- what if none of these worked out?! A side note, all of these saddles have adjustable trees and are wool flocked. Best. Combo. EVER. Probably the closest I can get to custom without actually doing custom.

She took new measurements of his back before we got rolling. I compared the tracings from this visit to the visit in January. While the whithers themselves hadn't gotten wider, his back did. She takes two tracings further down his back (I'm not sure where exactly) but they were both bigger than they were in January by a half inch or so on each side.

Of course I have no pictures of the saddles. Sigh. Bad blogger.

I rode in the monoflap first, and hated it the minute I got on. The thigh blocks didn't hit me right (because of the monoflap design). They pushed my thigh out, which took my knee off the saddle, and I rode around like a beginner rider with my knees straight out and heels on. She had to change the tree in the second one, so she said keep warming up and we'll switch when the tree was swapped. I just walked and trotted, but I fought the saddle. In spite of that, Penn floated along, happy as can be. The fitter said that the Fairfax Monoflap she wanted to bring rides in a very similar way, so I'm not missing anything (they didn't have an 18" seat in stock that I could try).

I rode in the custom styled regular flap one next. That went slightly better, but I hated the Nubuck leather. I already had full seat breeches on, and nubuck is very similar to suede. It was grippy in all the wrong ways. This saddle was also supposed to have a deeper seat, but it felt flatter and I felt more prone to left/right rolling. I struggled in the canter, and Penn had a very low quality to the canter and 4-beated most of the time. It didn't give me the same ability to sit that the one I tried the weekend before did. I did ask for one change, but it was difficult to set up and perform, and Penn struggled with it too even though he seemed happy with the saddle.

Finally, I tried the plain unadorned new Elevation. Ahhhhhhh. I was super worried it wouldn't work out, because then I'd be saddle-less. I sat down in it and was like, "ohhhh this is better." I had the same bucket feeling, and we went on to do a bunch of quiet changes and his first canter zig zag! Left lead half pass, change, right lead half pass. It was far from perfect, and I had trouble starting the left half pass, but in the final try, he did an ok left half pass, to an ok change, to a nice right half pass.


We talked prices and fit and trial period, etc. She adding flocking to it and told me in 30 hours of riding time, she'd have to come out and check the fit and probably add more flocking since all of this fresh new flocking will compress.

Since getting the saddle, I noticed Penn is easier to maneuver laterally and is more uphill. I've found it's easier to sit the medium trot when the saddle is helping me sit up and absorb it, and it reminds me to sit the heck up with my shoulder and sit my butt down and back, which helps lift Penn up. He's much happier to do his changes.

Of course all of his schooling is on hold while Penn is rehabbing, but he finally got his big boy saddle!

Posted by Codex Dressage at 4:00 AM