I was extremely anxious coming up to Penn's next vet check... hence you got the sad and sappy "Still Here" post. I'm trying not to get my hopes up about him healing properly and completely, so I have a ton of back up plans in my head for him. "If he's completely fine or can at least do ABC, he'll stay with me for a while yet. If he can't, but can do DEF, there's plan B. If he's not even able to do XYZ, there's plan C..." Yadda yadda yadda.


Penn was reset Wednesday last week (2 days before we went to the vet), and I noticed his LF fetlock had a big bump right smack on the outside as I was waiting for the farrier to get his special shoes forged and hammered. WTF horse? Of course I didn't get a picture of it.

Farrier also tried out a new shoe that's a bit bigger and will allow the heels to be set back even further, which the vet wanted when I emailed her pics of his last reset. The shoe also doesn't have a flat surface- the entire bottom that touches the ground is beveled. That is, except where the medial flange of the RF is still pounded wide for support. The new shoes also allowed that to be a bit wider.


Friday morning, I pulled Penn out of his stall. The left front had blown up.


I sighed and thought, "At least he's going to the vet today." Wrapped him up in no bows and off we went!

We had a very uneventful drive this time: no K turns with the trailer in driveways due to closed roads, no new chips in the windshield.

Since I was a bit early, I decided to try pulling off his bell boots so the associate vets wouldn't have to... I managed to mangle my thumb in between the boot and his shoe and gave myself a nice blood blister. I decided to just let them pull them off... they're much more experienced with that kind of thing. Turns out they couldn't get them off either. I held his leg, they pulled and the shoes are simply too big for the bell boot to come off over them. Facepalm. I love these bell boots, they're tough and they're big enough to cover that massive set back shoe. I'll have to be smart about pulling them off when he has his shoes reset in show season, but for now, they can stay on.

The first thing Dr Cricket did was check out the LF. The swelling had subsided to practically nothing after being wrapped for 6 hours, and he didn't react to any palpation, so she didn't think there was much to worry about there. She figured he probably banged it on something and to keep an eye on it.

He's sound on the arena surface.

The findings were as follows:

So what does that mean?
The only diagnostic left that Dr Cricket can do is an MRI. She didn't feel it was necessary at this point. She thought more time would give us a better indicator of what's to come for Penn. I'm going to talk to his insurance company to see how much of that they'll cover, so that it is an option when we go back in a few weeks.

So what's causing all this general lameness? Well the answer isn't great. She thinks the tendon has healed sufficiently on the right front, so it's no longer an issue. However, his general foot and leg conformation is working against him. He also wants to stand close up front and walk like a cat with one foot directly in front of the other. Basically, it's how he's put together. That's a super shitty answer, but one I can get behind. Normally a horse like this would have been weeded out in the PPE process and not gone on to the career he's had.

So what's next? Well, it's not all gloom and doom. He's allowed to start trotting again! We're going to start an ultra conservative trotting program:
His next appointment will depend on when his insurance runs out- I have 90 days after his policy period end to make further claims. I need to find out the exact details on that, and how much more coverage I can expect, then I'll make a recheck appointment for a week before that date so that I can be sure an MRI won't break the bank if his soundness has gotten worse. He's still going to go back, but I'd like to have at least one more visit be in that 90 day coverage period.

I did ask about equioxx for him- Dr Cricket didn't think we were there yet. She thought there's still some improvement he can make without it. She generally prescribes it for horses that they can't seem to get that last bit of lameness handled. So that's in my head and on the back burner for later maybe.


Despite such a small amount of trot, it's very exciting! I trotted him Sunday, and he felt heavy on the right shoulder both directions (worse to the right) and I had trouble getting his balance shifted in the one minute trot sets. I had to settle for keeping him longitudinally balanced to keep him off his forehand. 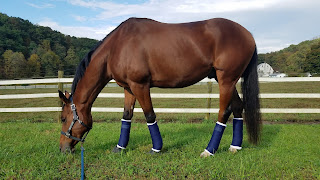 I also wanted to note: I did try these CBD pellets for Penn's general well being. They were the only pelleted version I could find, period. I found a single powder too, but it was slightly more expensive and Penn hates powder. I wanted to make sure I could measure it out for the barn staff, and liquid just wouldn't cut it since it would have to be eyeballed or drops counted. The pellets have no detectable THC (obviously I have to take their word for it), which was important because Penn didn't need to be "high" and it had to be safe for me and the barn staff to handle in passing.

I found researching it extremely difficult because there's a lot of anecdotal evidence and not a whole lot of science (free the hemp plant! for science! because you know if it wasn't hemp, it would already have science). Most places said start with a low dose, give it time, and see if you achieved the results you wanted, then increase as needed.


Pre-CBD Penn: I put up with a lot of his touchiness because he's mine and I love him lots. But by week 10 of our 17 weeks of walking, I wanted to kill him. He would stand in the cross ties and scream for me if I walked around the corner. He was excessively attached, looking for comfort ALL THE TIME when I was near him. He was standing very tall all the time too. He started nipping at horses as they walked past his stall, enough that he needed to have his stall bars closed entirely, no more hanging his head out. He had an excess of energy that was amplifying his needy personality and barn insecurities. I didn't have many riding issues with him, that's when he was on his best behavior. He got a little spooky as time went on, but nothing too far from normal. He was running every chance he got in his tiny turnout.

Post-CBD Penn: He had a day of diarrhea (still solid and turd shaped, but a hair looser than normal). Within a couple days he was back to his old mellow self. He could tolerate being in the cross ties. I could walk away and not worry about him freaking out. He was back to relaxing and taking naps. His eye was just softer. He slowly started to stall walk less, and then eat more since he wasn't spending half his day walking. He didn't scream the minute he heard my footsteps in the barn. He was the same steady guy to ride. He still moved around a bit more than he should have, but it wasn't as bad as before.

After that first month, I upped him to 75mg (two scoops) in the morning and 37.5mg (one scoop) in the evening, hoping to hit that chronic pain threshold. I don't have a verdict on that because a couple days into it, I pulled him off it entirely so it would absolutely be out of his system for his vet check (I allowed 5 days). He went back to stall walking almost immediately during those 5 days.

At a minimum, Penn will stay on it until he goes back to a normal routine. Maybe he'll stay on a low dose to keep his stall walking to a minimum. We'll just have to see!
Posted by Codex Dressage at 4:00 AM