Before I get into OSU's findings, I want to go through what took us there.

I called the emergency vet many Fridays (5/31) ago when a hind end lameness turned full blown neurological. I already had an appointment for a vet to come out for a lameness exam to see if he pulled something stomping at flies, but swaying and staggering changed things... it wasn't a pulled muscle anymore, he was sick.

The emergency vet came out and took his temp (101.2, a very slight fever), did a run over of all his joints and general condition. She had him walk away from her, and turn small circles. She didn't even try pulling on his tail or stacking his hind feet- he was so unstable on his own feet that she didn't think it was fair. She didn't feel anything in the joints, but the elevated temperature and neurological problems bothered her.


Forgive my lack of polo, as I was packing for the barn before work, I realized I was out of barn shirts!

She pulled a ton of blood for various diseases, and Liam got a hefty dose of DMSO tubed into his stomach, a shot of dex, a shot of banamine, and oral vitamin e.

By Saturday morning, Liam's temp was back under 100 and he was much more stable on his feet. He'd been on stall rest for 4 days at this point.

HAVE YOUR VET VACCINATE YOUR HORSE. I know it's annoying and more expensive, but let me tell you, having my vet vaccinate Liam at his PPE was a great decision. We knew exactly what he'd been vaccinated for and what manufacturer and what batch, etc. This whole incident was/is stupid expensive, but the vaccine manufacturer paid for one of the very expensive tests (a blood and nasal swab).

I hesitate to share all that was tested for, because I don't want to scare people or put rumors out there. But I also want to take care of some rumors I've heard: we tested him for EHV (blood and nasal swab), west nile virus, EPM (blood only, no spinal tap since that has to be done at the clinic), lyme, strangles/rhino/upper respiratory diseases (guttural pouch culture). EHV was the big name disease of course, and the vet had to notify the USDA of a possible case. The USDA took it very seriously, and they visited the farm the next business day to check our bio-security and isolation. They made suggestions on keeping Liam properly isolated to keep the other horses as unexposed as possible, but also safely isolated so he didn't hurt himself. They discussed quarantine procedures if Liam was positive.

The geldings on the farm were redistributed to new fields, and Liam was put in 24/7 isolation with a tribute friend (literally, the barn owner turned him out with Liam and told him, 'may the odds be ever in your favor') in a field that didn't share a fence line with any other field, and both horses were banned from the barn. The virus doesn't live well outside the horse out in the sun, so this was actually ideal. Liam's stall was stripped and the barn and his stall were bleached.


Luckily, all of this effort was for nothing. Most of the tests came back negative, including the big one, EHV. Yay! We did twice a day temperature monitoring, and his temperature was in normal range every time. As he started feeling better, he started fighting barn owner on having his temp taken, and taking his meds (liquid vitamin e syringed and marquis).


Although a wide range of serum titers was observed for necropsy positive EPM cases, there was a trend for higher serum titers (≥ 1:4000) to correlate better with EPM.

Without the spinal tap to compare to, we could only make a guess that EPM was causing his issues. We started treating for EPM the day after his emergency visit without the results yet, deciding that treating him won't hurt him, but waiting could. The vet decided we should keep treating him, even though his blood serum value isn't greater than 1:4000, because his value is elevated and he's experiencing neurological problems.

Liam seemed like he was responding to the marquis and vitamin e when the vet came back to do a guttural pouch culture (because of the bacteria findings on the PCR nasal swab) on 6/6. His throat looked fantastic and healthy, so we expected the culture to come back clean (which it did). He was super alert, mildly fighting the vet, and in general being dramatic.

He took a downhill turn on 6/11. He came in from the field with swollen hind legs and a fever again (101.3). A video from the morning showed him looking very subdued, slow, and more neurological than he had looked in a while. The vet was called to make sure the hind leg swelling was *just* cellulitis and not something more sinister. He had some rubs on his hind legs, so we agreed the cellulitis was not directly related to the original ailment, but related in that he probably interfered because he's neurological. 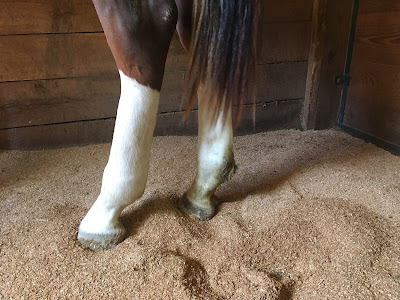 By the time she got there, he was more neurological than the morning, but his fever had gone. She pulled blood to do a CBC, which they test in house. He got a shot of exceed as well. He might be more neurological as the parasites die off and increase inflammation in his body, or it might be the inflammation returning because it's not actually EPM that's causing the issue. EPM doesn't cause fevers though, but cellulitis can, but he didn't have cellulitis the first time around. The vet asked us to monitor his temperature twice a day to see if there's any kind of pattern and to see what kind of variation there is. He proceeded to spike fevers of 101.3 to 101.8 in the morning after cool nights turned out and return to 99.6 to 100.8 by the evening. It was a bit baffling. It did clear up as the cellulitis cleared up.

A visiting clinician had her boyfriend (a vet) do a look over of Liam at the end of her first day teaching at the farm, who thought he had wobblers. A third opinion was requested, and I sent her all the videos and information I could. She thought he might have broken his pelvic floor along with EPM, and encouraged me to take him to OSU immediately and not wait the 3 weeks until she was going to be traveling to my area.

So there's some back story.
Posted by Codex Dressage at 6:53 AM