Eli came home and settled in very nicely. Quiet, well mannered. And he made friends that liked him back!

Within 48 hours, he formed a super close bond to an OTTB named Julius that was a turnout buddy, who also lived in the stall next to Eli. 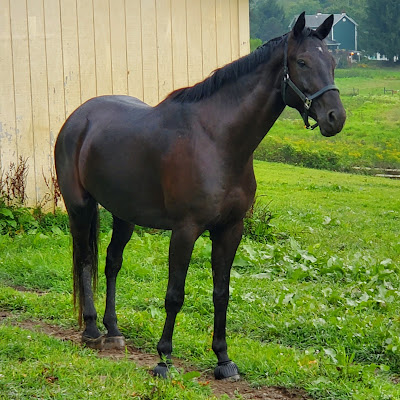 You can see where this is going.

Within a few days, I started getting bad reports cards: "Eli was pushy at the gate this morning." "Eli tried to walk all over us at the gate and we had a coming to Jesus." "Eli was super spooky coming through the indoor to his stall."

I had issues with spookiness in the evenings and with him calling when I lunged him. I thought he was spooky about the arena doors since he wasn't normally worked in an indoor. I thought the calling was because I was disrupting his normal work/turnout/feed schedule (he was always worked in the morning after breakfast at his breeder's, not in the evening at feed time or later when he should be turned out). I rarely had problems on the weekend when I was able to ride him in the morning or early afternoon.

I thought it was all part of him settling into a new routine with strangers, and I wasn't giving him strong confident rides to deal with his spooky issues in the indoor. I was concerned the horse I brought home was actually different from the horse I tried and bought.


It was made abundantly clear two Saturdays ago, 9/7, what the problem was. Julius's owner came out before breakfast to work with him in the round pen, near Eli's turnout. By the time I was done with stalls and mixed and dumped breakfast grain and went to get Eli's herd to bring them in, he was a pacing mess at the gate. Keep in mind he had only been separated from Julius by about 20' and Eli could still see J.

I got Eli haltered, but he jigged into the barn, hot tempered and anxious. I put him in his stall, where he proceeded to whirl around screaming his head off instead of eating his breakfast. Keep in mind, this horse LOVES FOOD. No breakfast. Must have Julius.

We got the horses in and immediately created a plan to break up this bromance.

Eli's stall originally moved across the barn, but ended up moving back and next to his original stall (one horse between him and J).

For turnout, we swapped him to a field next to his original field, but therr was a path between fences. Oh boy was that not enough.

I hung out all day (had a nice ride though) and agreed to watch all the horses to make sure they got along with their new friends. Eli got outside and immediately became unglued and had one of the biggest meltdowns I've ever seen. He met his new friends, said "You're not Julius" and galloped the fenceline. For a half hour. I had to take off his fly sheet because he foamed through it.


The decision was made to further disrupt the gelding fields and swap J with another gelding so that J would be out front and rarely visible from the back field Eli was in.

J settled in with zero screaming and zero worries. He gave no shits that his BFF Eli wasn't there.

Eli would not be so easily deterred.

After wearing out his 3 friends in his half hour of galloping (2 OTTBs who thought the running was fantastic and a draft cross who thought the one down and back was enough), he called them wusses, attacked them every time they tried to come be friends, and kept trotting. I watched him for 4 hours that day, until it got dark. He eventually walked the fence or stood at the gate, and he studiously scoured the field opposite of him for J. He screamed. He got a second wind 2 hours in and started galloping down and backs again.


At the end of 4 hours, he was head down trudging the length of the fenceline at a slow walk with periodic screams. He did find the water and get a drink.

Come morning, Eli was still walking or standing at the gate. I hung around until turnout again and watched him for another 3 hours.

Day two, he ran for about 10 min, screaming but not threatening to jump out. Then he went back to walking the fence. By the end of hour 2, he started to test the grass and visit his new friends. Ever affable OTTB Teddy was there welcoming Eli with open arms. Eli would spend about 5 or 10 min with his new friends, lose his mind and gallop back to the gate to look for J.


Both times I watched him, I ended up getting a chair and sitting by the barn and watching from afar, otherwise he'd stand by the gate with me as his security blanket.

Apparently day 3 of turnout was similar without the running, and by the end of last week he was going out and eating right away. He is still distracted in the barn when J walks by. Eli gets bright eyed and excited and calls when he catches sight of Julius.


Eli's behavior went back to normal puppy dog behavior a few days after he was separated from Julius. I felt icky last week, so I started Eli on the long lines instead of trying to ride him in the evenings, which really gave him solid direction and confidence about the arena doors. He's been lovely, and we had two good, solid, no shenanigans rides over the weekend.

We're not sure what caused him to bond so tightly to Julius. He's so chill that we didn't expect him to be so insecure. Frankly, we expected Julius to be the one with a problem since he seemed to be the one doing the following and is easily influenced by other horses' behavior. I can only guess it was the complete upheaval to Eli's life when he left his breeder and came to live with me.
Posted by Codex Dressage at 9:16 AM

Email ThisBlogThis!Share to TwitterShare to FacebookShare to Pinterest
Labels: Eli