Eli did get to partake in the farrier clinic back on October 12!

Eli ended up being the only horse shod on day one of the clinic. Day 1 was supposed to be theory, cadaver investigations, and gait analysis. After a bunch of theory in the morning, the farriers moved on to gait analysis and ended up shoeing Eli because he came in with a lost shoe.

He was at 5.5 weeks in his cycle at the time of the clinic and he really needed reshod at 4 or 4.5 weeks because I could hear him clinking. I jokingly told him "You need to keep your shoes on until the farrier clinic!" Well he did EXACTLY that. He had the shoe on when he went out that morning and it was off an hour later.

The farriers spent ALL DAY on him. They discussed his diet, supplements, hoof quality, movement. They were appalled at his hoof quality and it took them a hot second to understand what they were seeing is BETTER. They all immediately agreed that the packing we did the first time around was insufficient due to how thin his soles are (yay xrays), and recommended leather pads. 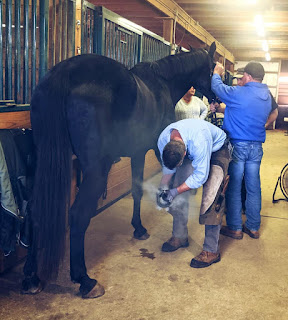 The master farrier (MF) himself shod him with a different type of shoe with hand forged customs:

Best part is my farrier was there and took copious notes so he can continue the plan. We're at 3.5 weeks now, and his shoes look much better than they did last time at 3.5 weeks. I'm sure part of that is just two better shoeing jobs and better nutrition since he came home, but it's nice to see his shoes are still firmly attached to his feet.

The other thing that happened in October is I had the dentist out to see Eli. I missed the appointment (it was a choice of an appointment during my working hours in October or wait until December), but another barn mate did a live play by play for me via text.

The dentist wasn't outright appalled by Eli's teeth... but he said they were bad. More than standard wear since whenever his last appointment was. I told him that Eli is heavy on the bit when he's not hiding behind it, heavy on the forehand, and can be difficult to bridle so I'd appreciate anything notable about his mouth to maybe find a different bit if needed.


He said that the way Eli's teeth were worn (ramps) would encourage him to be on the forehand. He corrected Eli's teeth and then checked my bit and bridle. He bridled him and unbridled and bridled and checked the shape of the bit against Eli's mouth and found no reason to worry. He really loved the bit I had picked (Herm Sprenger RS Dynamic Bradoon with lozenge), because the shape matched Eli's mouth and fit well, and should be gentle for him.

The difference in this horse guys. WOW. I was never so thrilled to have a horse be off the bit and a giraffe. We've changed from working on not being behind the bit and down, to not rooting and pulling the rider out of the saddle or off balance. He's learned he can knock me off balance a bit. When I remember to open my hip flexors (or lead with them if you will), keep my core pressure up, and then keep my right knee up and right back butt area down, he can't ruffle me at all.

From 10/21/2019, I buckled down and rode, paying attention to my dropped right knee that Mary Wanless pointed out. Eli is still a little stabby, but so much better and not plowing into a hole to China.


The next two are my barn mate T riding Eli. Normally I'd never share video of someone else, but I'm sharing because of how she's able to ride him uphill like he is built to move, and she gets a bit more reach out of his fronts than I do. She really did a great job schooling him for me.

Really big improvements for Eli! Feet and teeth are very important!
Posted by Codex Dressage at 11:56 AM 8 comments:

I started Eli on Total Calm and Focus after my last post. He's a pretty chill dude, but he seemed to be struggling to adjust to life where he wasn't on 24/7 turnout and being "alone". The distraction started flooding over to our rides, where I am more than capable of riding out whatever he gives, but I'm also trying to mend my broken confidence. Me being hypersensitive to what can possibly spook Eli so I know it's coming really discourages Eli from having confidence in me. I'm trying to set us up for success: I need to feel good about him so I can relax, so he feels good about me and relaxes, and then we spiral upwards. So, Total Calm it is.

So far so good. He doesn't panic when I leave him in cross ties. He still watches me move around the barn, but he watches with mild interest, not intense focus. He is still upset if he's actually alone in the barn (valid I think), but he's not too upset when he's "alone" in the barn. We ended up swapping his field again because he was playing too hard with his new friends, and he made the swap easily with no drama.

I do try to ride with a friend. I think we both feel better with company- I have moral support and Eli has an equine shield. One of my barn mates has a very sensitive mare that has the same tendencies as Eli, albeit much more dramatic. Since I went to see Mary Wanless back in Jan/Feb, and have ridden with Mary twice now, I've brought a lot home that has helped her manage her mare's tendencies. When I hurt my back, I asked this barn mate if she'd like to take Eli for a spin since I knew he wouldn't scare her... she did a FABULOUS job riding him and it gave me a ton of confidence in riding him myself. She can articulate back at me a mix of Mary sayings and first hand riding experience that really help me feel more secure and effective.

I've been struggling with my confidence ever since I started horse shopping. The fall I took off one young horse really rattled me. I don't think the fall itself rattled me, because the very first horse I looked at dumped me too. I was able to rationalize the first fall into a cause and effect. I have no idea what caused the second fall, I have it on video and I didn't see or feel the naughty behavior coming... aside from a general lack of forward and tension. The horse actually felt like he relaxed and then had a meltdown. It doesn't matter, because something in me snapped and "fake it til you make it" isn't working for me like it did when Penn came home. Eli is getting more and more spooky, and I'm 99% sure it's my fault. Today, I signed up for an online course series to help myself get over it. The course focuses on NLP (neuro linguistic programming) to overcome fear by getting to the root of it and then moving forward. I know brain rewiring works, so I just need some help to get mine fixed up. I'll review later on if I think the program has been worth it.


That's all I'm sharing in this post. I have a bunch of stuff I want to share though, so stay subscribed friends, I actually sat down and wrote some posts! Next up will be the farrier clinic and the dentist!
Posted by Codex Dressage at 3:35 PM 10 comments: