Trip to the Vet

Penn came up very lame on 4/3- there's a bunch of factors that contributed, not a single "that did it" source.

He didn't want to push with his left hind leg - he'd wobble/hitch at the walk, head bob and squish at the trot on the diagonal pair of right front/left hind, and he was completely uncomfortable on the left lead canter.

He rested the rest of the week and I tried to stretch him a little, but he still wasn't sound by the weekend. I ended up cancelling my trip to GP Trainer's for lessons 4/7-8. We buted him all week and tried robaxin over the weekend. He didn't make much improvement.

I wanted my vet to look at him, but I also wanted to try the electo-acupuncture that our office offers. Unfortunately, the vet who usually does that (and chiro work) is on maternity leave, and they have a vet coming in once a week to cover all of her clients. Luckily, the travel vet was coming to town the following week! Unfortunately, her schedule was packed and if I wanted it done, I'd have to bring him to the office for an end of day appointment.

No biggie, I called the office and they were able to work out a time and day for me to come and both vets would look at him in one swoop. Wahoo! I felt better about him having a lameness exam at the vet office anyway because they have all the toys there (gait analysis and all the non-mobile machines).

The appointment was for 4pm on Wednesday 4/11, so off we went! Penn was fussy in the trailer, and a bit hot headed getting off. It made it a bit difficult when they jogged him on the asphalt... he's wiggly already and extra lookiness doesn't help.

We talked about all the factors that happened. She watched him trot in a straight line and circle, flexed each leg two different ways, and only found a very very slight reaction to the front right fetlock. She thought everything moved fine when manipulated, his hips are fairly even, and thought he was probably just muscle sore from training and body work. She offered the "lameness finder" and I said, sure why not, we're here.


Penn managed to confuse the lameness finder. It requires 20 steady trot steps, and all of a sudden he was completely distracted by a week old filly in a pasture with her mom. I did try to go and pet the filly, with the vet's permission, and she thought I was scary and her mom immediately ran over and ushered her away in a perfect "stranger danger" way... I should have at least taken a picture of her!

We settled on 3rd time's the charm and that the issue is the left hind and right front, but more the left hind. The right hind probably reacted because it's either sore from work or sore from compensating.

The vet didn't think we were looking at muscle strains or tears (yay!), or bone chips. She said to ride him lightly, w/t/c allowed, but gently push his comfort zone to get him using his hind end properly again. She also approved a clinic I signed up for on 4/22 (details to come!!!). She was the one who asked if I was still going (she originally wanted to go too except she's on call that day), and I told her only if she approved it. It's a rather low impact clinic, we'll be mostly walking and standing around, so she said sure, he can still go!

Next up was waiting for the traveling vet to get back. The staff settled us in the exam room to hang out because they didn't have an extra stall for Penn. I got him a bucket of Alfa-Lox from the trailer, they got him a bucket of water, and the humans sat in chairs.

OMG guys, Penn is so damn cuddly. He's a giant lapdog. He didn't want any alfalfa, he kept his head in my lap, just wanting face scratches, without being mouthy at all. If he was smaller, he would have tried to curl up on me!

The travel vet arrived after only 15-20 min of waiting. She checked him over and talked to his regular vet, and decided to concentrate on his right shoulder and then evenly over his hind end.


Penn took each needle well, except the needle that went on the left hindquarter and even with the dock (attached to the blue wire in the picture above). He tried to scoot away from her and we had to reset him so she could get it in properly. I took a bunch of pictures so I could reference it later and work on that location my my mini-phaser.

He thoroughly enjoyed his treatment. Head down, sleepy face, relaxed ears. I'm pretty sure this horse is just a fan of body work!

The vet said to give him 2-4 days off, and then see how he is. We got him all bundled back up an loaded, and set off for home. I was excited to be parking my trailer in the daylight!


I wrote this in stages and didn't get it organized until now, but we've since decided more things for him.

I lightly rode him on the harder outdoor surface Saturday and Sunday this past weekend. He does feel much better, but not 100% like he did a month or so ago. We'll call him w/t/c sound, but not dressage sound. There are certainly lesson ponies out there that are much much lamer than him, haha. When I insisted he use his left hind, he felt very good and strong. When I didn't, he'd sometimes revert back to uneven and have a loss of balance. I'm not sure if he has to learn it won't hurt as much, or if it's still sore, but eyes on the ground said he looked very babyish when he'd have those moments of lost balance and lack of push, like he was confused about what I wanted.

He got a day off and I took him for a light walk trot stretch in the indoor Tuesday, and he came out looking like shit. I don't know if it's because it got cold and the mud got deep again or what, but I lunged him briefly to move him around and he worked out of it. I got on (from the right side, just in case it makes a difference to him... I almost pushed myself over him and off the other side of him... it's been at least 15 years since I got on from the right side, lol). He felt really good though, very comfortable. Was it more time? Was it softer footing? Was it lunging a little first? Who knows. But it did cement the next decision we made for him.

He's still allowed to go to our fun clinic this Sunday, but on Monday he'll go back to the vet clinic for a SI injection. The vet and I independently came to the decision- I texted her an update and asked what she looks for in horses that might need a SI injection. She said he's already ticked all the boxes, and she just wanted to see how he responded to the acupuncture before suggesting it. I did want a spinal x-ray, but she said their office wasn't equipped to x-ray that close to the hip- the horse is just too thick and fleshy there to get a good picture. She said he'd have to go to a vet school and be put under to get a picture. It's not important enough to me to travel 10 hours for that, but I thought it was an excellent suggestion when I was poking around for info on horses who get SI injections. 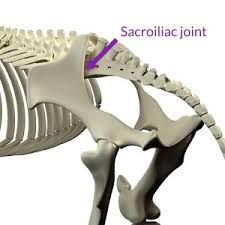 Everyone feels really good about having that done- I knew it would happen eventually, but I was hoping we could wait until his age was in the double digits! He just turned 9 in March. He's always been weak in the SI area, and we've done a lot to build up the muscle in his hind end. Over the past year, he's gotten stronger in that area and less touchy. The chiropractor and body worker both said that area looked better. However, I think the increased sit and self carriage we've been doing aggravated it (plus a couple other things that aren't blog fodder), and he needs some help now.

He's being turned out in the round pen (flat, solid footing) until he goes to the vet again, and probably after his post-injection rest period... at least until the footing resembles earth again, not soup (fuck you mother nature and like, the 7th winter you've sent us). So inject next Monday, 4 days off, then a week or so of light riding. Hopefully he'll be back to normal!
Posted by Codex Dressage at 4:00 AM 16 comments:

Penn is having a physical issue, one that is actually taking us to the vet clinic this afternoon instead of her coming to us, so while that happens, enjoy these FLIR One Infrared pictures I took yesterday!