I diligently took pictures of Eli's front hooves after every trim and reset. I didn't do the same for the hinds since they weren't as drastically bad... but they've both evolved so much.

I need to talk about the hind hooves first, because they influenced recent changes we made to the fronts. Forgive me, there's some history to go through before we get to the comparisons!

At the beginning of summer, Eli was struggling with his stifles. He has struggled with toe catching behind ever since we put hind shoes on him last fall, but it started getting a lot worse once we started working outside on the harder outdoor arena. He started catching the toe more often and harder, wrenching the stifle in the process. I know his stifles turn out and he'd prefer not to track straight, but it's been getting better. I did my due diligence and had the vet out for a lameness exam even though he's not really lame, and to take xrays of the stifles.


He was due to have his hind shoes reset 2 days before the vet came, so I had the farrier pull his shoes so the vet could take whatever xrays she wanted. He did a slight trim so Eli wouldn't chew up his feet  but left enough hoof to put shoes back on. In those two days, he didn't catch his toes once.

The vet did a thorough look over and we xrayed the stifles to check them for bone malformation. Everything looked good on that front- no hooks! He did have some inflammation, which considering the struggle bus his hind end has been on, didn't surprise me. She recommended alternating rounds of Adequan and Legend every 3 months (which I'll do once I sort out a few things), and keep doing what I'm doing.

That's all well and good, but I didn't have a content feeling on why shoes caused Eli to catch his toes. Farrier and I agreed that if he'll stay comfortable, we'll leave him barefoot behind since he's not wrenching the stifle. Eli got a proper barefoot trim and was happy.

That lasted about 3 weeks before I noticed some significant issues: footsore behind led to footsore on all 4 feet, despite pads and packing in his front hooves. He stopped walking comfortably out on the trail, even on soft dirt footing. He stopped pushing from behind to go up hills, not that he pushed much anyway, but he was clearly uncomfortable and pulling himself forward with his chest. He was standing more square on the concrete aisle, but everything else seemed touchy.

I had been talking to Penn's owner about hoof boots, but I was struggling to find a boot that was long enough for Eli's hooves, but narrow too. Eli's hind hooves are quite narrow, and more than one company told me their products wouldn't work for him. I was paroozing Easy Care's website when I saw they have a shoe specifically for hind hooves in their EasyShoe range. We measured Eli's hoof, and the shape of the shoe was right for his hoof, so I ordered Eli's first pair of EasyShoe Versa shoes!

The day finally came to put them on (we had to wait for enough hoof growth), and getting them on was an absolute shitshow. My farrier has put similar shoes on several horses over the years, so none of what happened was his fault. Eli was in serious pain. Farrier did a normal trim, and we found bruising arching with the white line for several inches along both hind toes.

Farrier thoroughly dried the hoof using a heat gun, slathered glue, then nailed the shoes on... one f-ing nail at a time. Eli would snatch the hoof out of his hand at every single nail. Funny part was, the nail going in didn't bother him as much as the hammer pounding near the hoof. Eli caught him once and the whole process had to stop while Farrier bandaged his hand up because he was bleeding everywhere (no good horse discount, I went and bought Farrier beer). 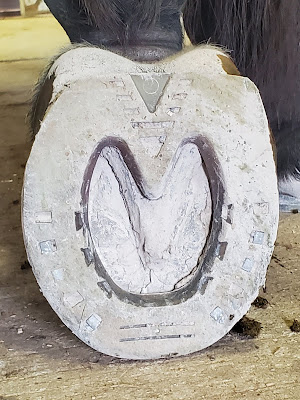 I was a schmuck and realized something the next morning: I should have packed Eli's hinds with magic cushion when Farrier was done the night before. I went out after work that day and packed his feet. He was still a bit sore when I brought him in, but post-MC and about 30 min later, he was already tracking better and bigger behind. 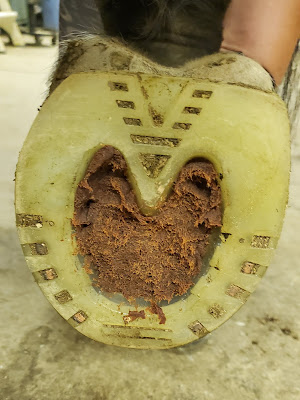 Since then, Eli has felt great! We're in our second cycle of Versa shoes, and I'm happy to say the second set went on a lot easier. Farrier has devised a great process for getting them on, and it's so great that he struggled briefly to pull them off. They were still adhered VERY tightly after 6 weeks in dry summer.


Eli wears size 138mm, but might have to go to 140mm in the next few cycles because his hind feet have started to widen! We can always grind off some of the length if needed when the time comes.

With the polyurethane hind shoe experiment being a success, this past week we put on these front shoes:


I originally wanted to put on Versas, but the shape of the front shoes wasn't correct for Eli's fronts. I also wanted to keep the bar shoe shape with frog support. After a lot of discussion with Penn's owner, I added supporting the bony column of the hoof and leg with a frog support wedge. If you recall, Penn's owner is a corrective farrier who leans towards barefoot and alternative shoeing. She dislikes the impact of steel shoes, and won't put steel shoes on unless she's doing pads and packing under them for shock absorption and frog/sole support. 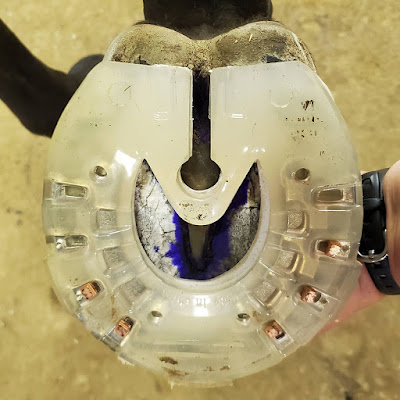 The Performance N/G fit the bill. Definitely click the link to see the shoe flex independently. Eli wears a size 4, which is snug in width and JUST long enough.

These went on just as nicely as the hinds. They fit very snugly before they were glued and nailed on, so fingers crossed they stay on as well as the hinds have!

While I don't have a verdict about these as far as function, they appear to be doing the trick. Eli seems happy in them, and he's using his shoulder well and seems happier. I thought I had video, but my Galaxy s10 fell victim to the most recent Pivo app update and I had an error happen while recording Eli going in his new shoes... so no video.

In the last year, the quality of hoof has gotten a lot better all around. Eli's hooves were crack free until summer started, then all of a sudden got a bunch of small, minor cracks. The quarter crack in his left hind is gone though!

And without further ado, a video of the last 12 months of front shoeing!

Posted by Codex Dressage at 4:00 AM 4 comments: