Eli starts 2 weeks of strict stall rest today. I called the vet Tuesday evening for a funny looking puncture/scrape on the inside of his left hind... I just wanted to be sure nothing was in there. 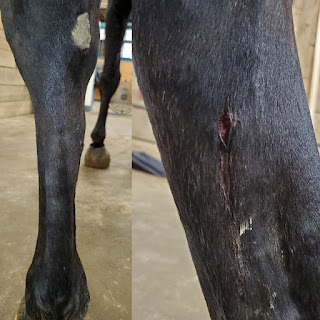 She was immediately concerned about a fractured splint bone and wanted to see him. When she xrayed, we found the tiny divot/bone irregularity in the red circle.
It bothered her a whole heck of a lot... so we're on the ultra conservative path and waiting 2 weeks to xray again to make sure the splint and the cannon bones don't have hairline fractures.
Eli SHOULD be fine. 9/10 horses are completely fine. He was pretty sound last night and everything points to it'll be ok. We just don't want to get this one wrong. 🤞
Posted by Codex Dressage at 8:39 AM 8 comments:

If you follow me on social media, you already know the news. My plans got a little messed up between when I posted last and this past weekend, but it all worked out for the best!

We did go horse showing and it was GREAT, we just didn't go to the show I originally planned on.

I need some time to process videos and pictures and wait for the official show photographer to send me a few images, but there will be an official show post later this week I hope! (I also need to do mega updates of the various pages on here) 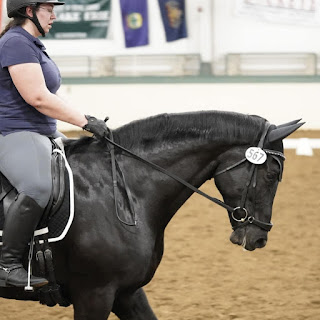 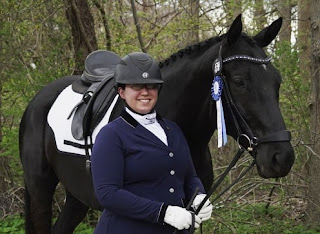 Until a little bit later!

Posted by Codex Dressage at 9:56 AM 2 comments:

I'm not sure who is still here and reading. If you are, I appreciate it! Writing about the day to day issues just isn't going to happen for me, and it would be boring I think, so I'll do these periodic write ups that will have video and other things we're up to. Partly for anyone who is still interested, and partly so I can look back at what we were doing, what worked, what didn't, and to keep track of our progress.

Eli's joints, tack, and hooves have always been a work in progress.

Early in Jan 2021, he became VERY spooky. Like, get on, strap in, trot off because you can't trust him to walk around the indoor without spooking hard.... and he'd even spook hard from the trot. I decided to have the vet look at his hocks/stifles at the beginning of February because we had turned up the dial on his work at the end of December and he had been working very well but the spooking was getting unmanageable. Turns out his hocks were super ouchy. The left was pretty dry and the fluid in the right was not the correct texture. Hock injections made Eli a very happy horse; the spooking stopped almost immediately. I also got him started on Adequan and we'll alternate Adequan and Legend every three months.

I had the saddle fitter bring some bits for me in February. Eli was going really well in his nathe, but he chewed through two of them and I can't keep buying them from the UK. We tried the NS Turtle Top Loose Ring first and never tried anything else. He met the bit right away and was very happy to keep the contact and was delightful to ride, with the added bonus of brakes and steering. We also added a wee bit of flocking to the front of his saddle because it was tipped down slightly... and I completely misread his objections to riding after flocking was added. I thought he was still sore from injections (we hadn't done too much at that point) and I thought he was objecting to working again after being unsaddled and such... nope. He progressed to threatening to rear. I spent the next week trying to determine if it was the saddle or a sudden behavioral issue. Apparently you can tack and untack him a dozen times and he gives zero shits about going back to work, even if he didn't like the previous saddle. He cares about how the saddle feels in the shoulder and under the twist. The fitter came back out (I had called her the day after she was here with an SOS) and she stripped all of the flocking from the front and reflocked it with completely new flocking since this saddle was used when I bought it. Eli was happy, and not trying to rear, haha. It still needs a little more flocking, but we're going to add it slowly as the brand new flocking compresses. She said if we ever get him another used saddle, she's going to strip all of the flocking from the everywhere and we're going to start from scratch since he's apparently very sensitive to it.

As for his hooves, we've had a few change ups.

Front hooves: Last year we tried removing his pads and packing, tried easy care shoes, and then went back to pads, packing and a 2 degree wedge after the vet xrayed his fronts because he was so sore. Those made him happy, but he still wasn't landing heel first. Penn's owner suggested flip flops (steel toe on vulcanized rubber shoes), and on 3/2/2021, my farrier and another local farrier were able to match up their schedules and she taught him how to apply the shoes. Eli LOVES them. He lands heel first, is more free in his shoulder, and is super happy. We have a couple issues to work out still (his feet suddenly started falling apart this past week when winter suddenly dried out), but I've got everything crossed that we can figure it out.

Hind hooves: When the vet came for spring shots, I had her take new farrier films of his front hooves, and for shits and giggles, take films of his hind hooves since we've had hind end issues in the last 3-6 months and I've never x-rayed the hinds. Umm. Yea, it's a good thing we did because the angles are a disaster. The vet and farriers agreed that we need to ditch his easy care hind shoes and put steel shoes, pads, packing, and 2 degree wedges on the hinds. Those went on on Sunday (3/21/2021), and wow does his hind end feel better. I could feel his hind feet, the left hind didn't trail, he didn't catch his toes and wrench his stifles, I told him to sit down in the canter and he did, and was super comfortable on a short trail ride (he usually struggle busses it downhill). Makes sense that anything that involved sitting down would suck for him when both hinds that are supposed to support his weight are at a negative palmer angle, stretching the back of his leg already. I'm super happy that he's happy, so fingers crossed he stays that way.

As for riding, knock on wood, things are going well. The mental coach I worked with last year and I had a call in January about new goals and where I want to go from here. She helped me come up with a plan, and we brainstormed how to make it happen and how I can hold myself accountable.

Eli hauled delightfully well, came off the trailer calmly, settled in a stall, and munched hay like a champ. I felt comfortable just lunging and hopping on. The trainer had a ton of good tips that mesh well with what we've been working on, and didn't involve pulling his head down or anything like that. It was ride the hind legs and forward into the bridle. She had me up Eli's "safe" trot to a real working trot, then we did a neat exercise in suppling Eli's longitudinal balance (see below videos). Basically, trot big (from the seat with big full posts, not the leg) on half of a 20m circle, then half halt and sit the trot and engage the core even more to shorten the stride and ask him to sit down.

Link to Youtube
We moved on to fixing the canter (which acquired a head toss, especially to the right). It's my fault because I have panic induced habits that make me pull, which he hates. We built the trot up to the big trot on a 20m circle at E/B, leg yield out (not actually out, just changing the balance on the shoulders) and press the trot until he naturally breaks to canter, aiming to have the transition coming into the wall at B or E. It's how she teaches her young horses to canter. It worked really well for getting us into canter with no head tossing. Then she had me sit on the outside hind in the canter to anchor myself.
I went back two Saturdays in a row, and plan to go back again. Those lessons were really helpful, and at home I worked on reattaching my elbows to my core since they wandered in my lessons, which made my hands jump up and down.
We set up the small dressage arena in the outdoor this past weekend because... we're going to a horse show this weekend! We're going to the schooling show winter series that I used to take Penn to, and riding T-1 and T-2. Here's some iffy video of T-2 from this past weekend... my riding friend T held a phone on a wiggly horse on Saturday, and Pivo just struggle bussed it on Sunday because the zoom was too much for it to see clearly and we had predictive follow on. Poor quality video of a high quality horse?

Link to Youtube
Anyway, hopefully I have good news about the show next week!
Posted by Codex Dressage at 6:00 AM 7 comments: