First off, I got Mikey new "underwear". I replaced his lavender stretchies shoulder guard with this navy one from Schneider's.


I am also on vacation until Dec 1! Well, I'll still be home, but I don't have to be at work! Yay! I had to log on this weekend from home and do a couple things, but oh well. I'll be seeing my trainer this week and spending time with family.

I rode again Saturday after stalls, and the whole goal was to be able to repeat Thursday's flying changes. I spent a lot of time at walk getting him through and connected, then at trot, doing half passes and lots of changes of bend through serpentine and circles. I had to spend extra time unlocking his jaw, he tends to not want to connect as well to his double bridle. I usually just hold his body straight and bend his head and neck right and left. Eventually he softens and I can push him into the contact.


The first two changes I tried (one each way), were failures. I didn't get the half pass right. I spent the whole half pass worrying about if I was setting him up properly, and in doing so, I didn't set him up for success. Instead I micromanaged him which didn't allow him to change, instead he gave me the hop of trying but no change. I decided to then focus on the half pass and only the half pass. Make sure the haunches are keeping up. Make sure we're going sideways enough. Keep the outside leg engaged. I actually dropped my left stirrup for the half pass right to try and get better reach with my leg. I hit the rail, swapped my legs and seat, he swapped his lead. No problem! I praised him and kept him collected on the short side, extended down the long, collect, back up centerline to half pass left. I paid attention to the half pass again, the strong right leg now, hit the rail, swapped my legs and seat and he swapped his lead! Not as through or soft as the first change, but who cares, throughness will come. I praised him and immediately got off to walk him out a little.

Sunday (Today) was close to 70 degrees, so I brought Mikey in from the field and fixed his body clip. I had clipped him several weeks ago and he grew a significant amount of hair back. I trimmed some more hair off his hind legs last week, and the two different clips obviously didn't match. I figured I could let the second clip grow out and it would eventually meet the rest of his body... well it didn't grow fast enough and Mikey was fuzzy so I shaved him again. He has to be presentable. I'll be seeing my trainer this week, and the German Riding Master next week. I banged his tail as well.

I finally got around to riding him, and I decided today was our walk through and connected day, so that's what we did. He'll be working hard Tuesday and Wednesday with my trainer, so a walk day won't hurt.

Nothing dramatic to report, I pushed for extended walk to collected walk and back and forth. We did some turn on the haunches, and I realized how to apply my seatbones to get the turn just right. He usually wanders a bit more than I would like, or gets stuck and pivots. We've been hitting the perfect mix of the two all summer, but it's sticky now that he's out of practice. We did more bending and then worked on centerlines and halting. He has a habit of tracking nice and straight, and then sticking out a hind leg in the last step.

Due to the mirrors in the indoor, I can finally watch what happens, which means I can correct it. I need to halt more off my seat, holding slightly more pressure in my right rein and leg as that is the side he consistently steps out on. We did several of those, and when he marched down centerline, halted promptly when I asked, while remaining through, and then adjusted his feet so he was square, he got a pat, good boy and long rein.

I gave him a quick hose down to get rid of any stray hairs from his clip then a vetrolin bath. He didn't really work hard enough to need it, but he's been working hard for 3 weeks now. He wasn't sure about the bath until I starting sponging the vetrolin on him. I love how he always relaxes when I start sponging it on him, I like keeping my partner in crime feeling good! 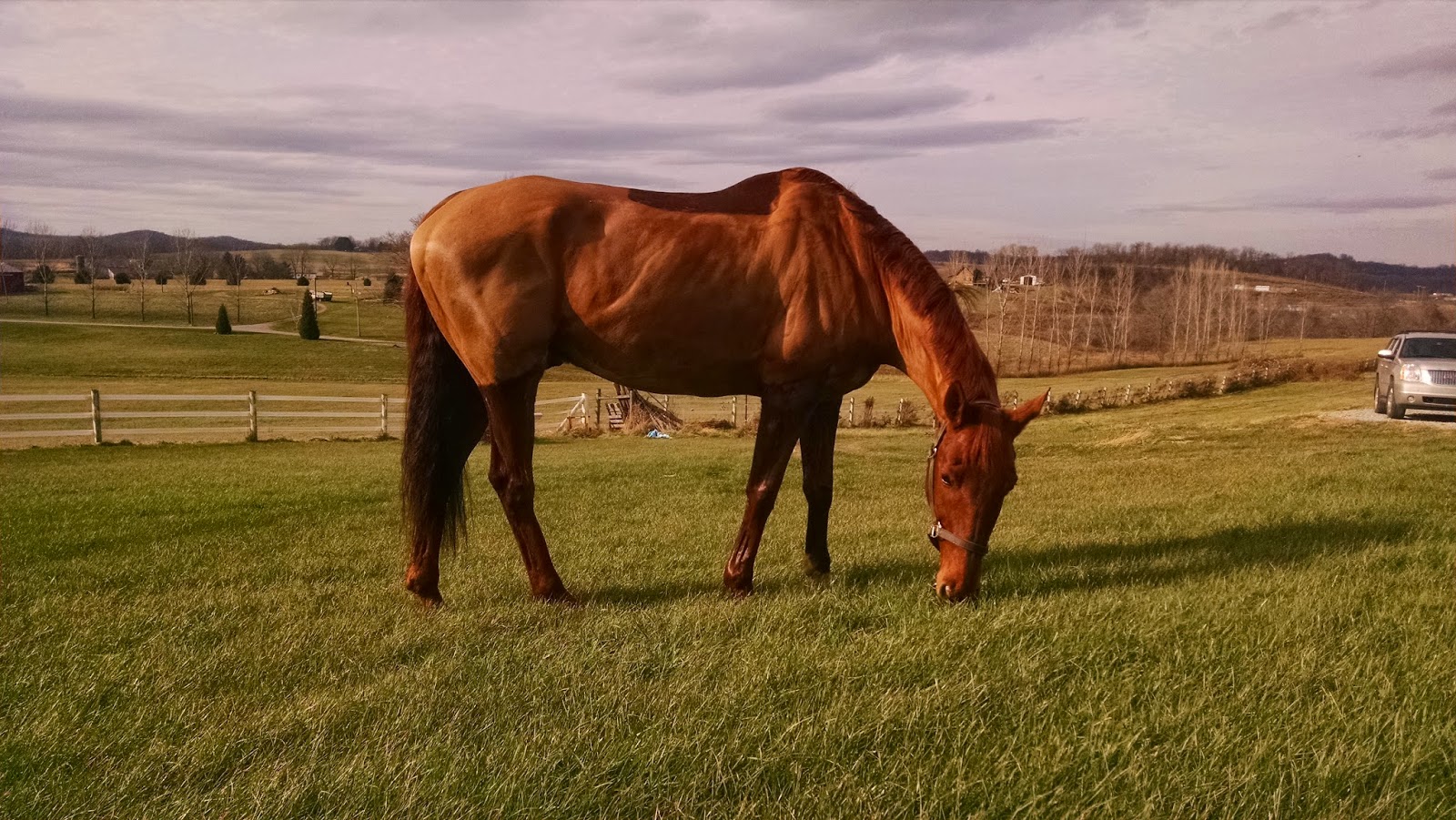 I let him graze out in the sun until he dried, then covered him with a sheet so he'd stay slightly clean and put him out (when I left I could see the mud on his neck and face). I packed the trailer... his feed barely fits in the gallon baggies I keep for traveling. He's eating 2.5 lbs of Nutrena Pro Force Fuel, 1 lb of Nutrena Boost, 1.5 lbs of Dumor Alfalfa Pellets... at each meal. 10 lbs of grain a day. Though I guess 3 don't count because it's alfalfa grass dried and pressed into pellets. Still. With his slow feeder ring (he likes to bury his nose in his feed and scoop it onto the floor using the side of his head, the ring stops this awful behavior), he takes forever to eat. Slow and steady right?