I moved Mikey to his winter house this past weekend, and what a day. Exhausting and always going.

We are starting with adorable Penny. We had a good cuddle Thursday night. 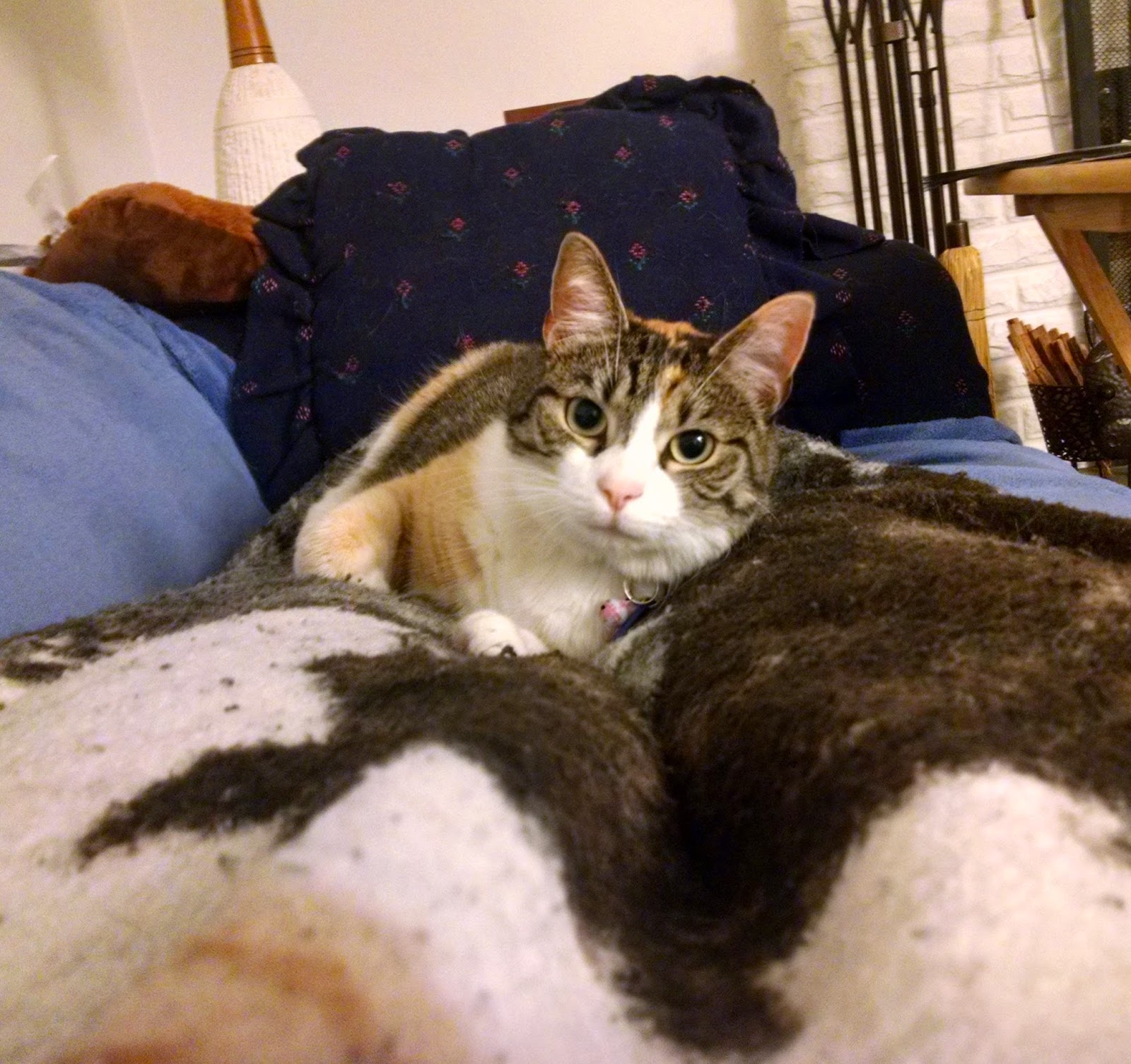 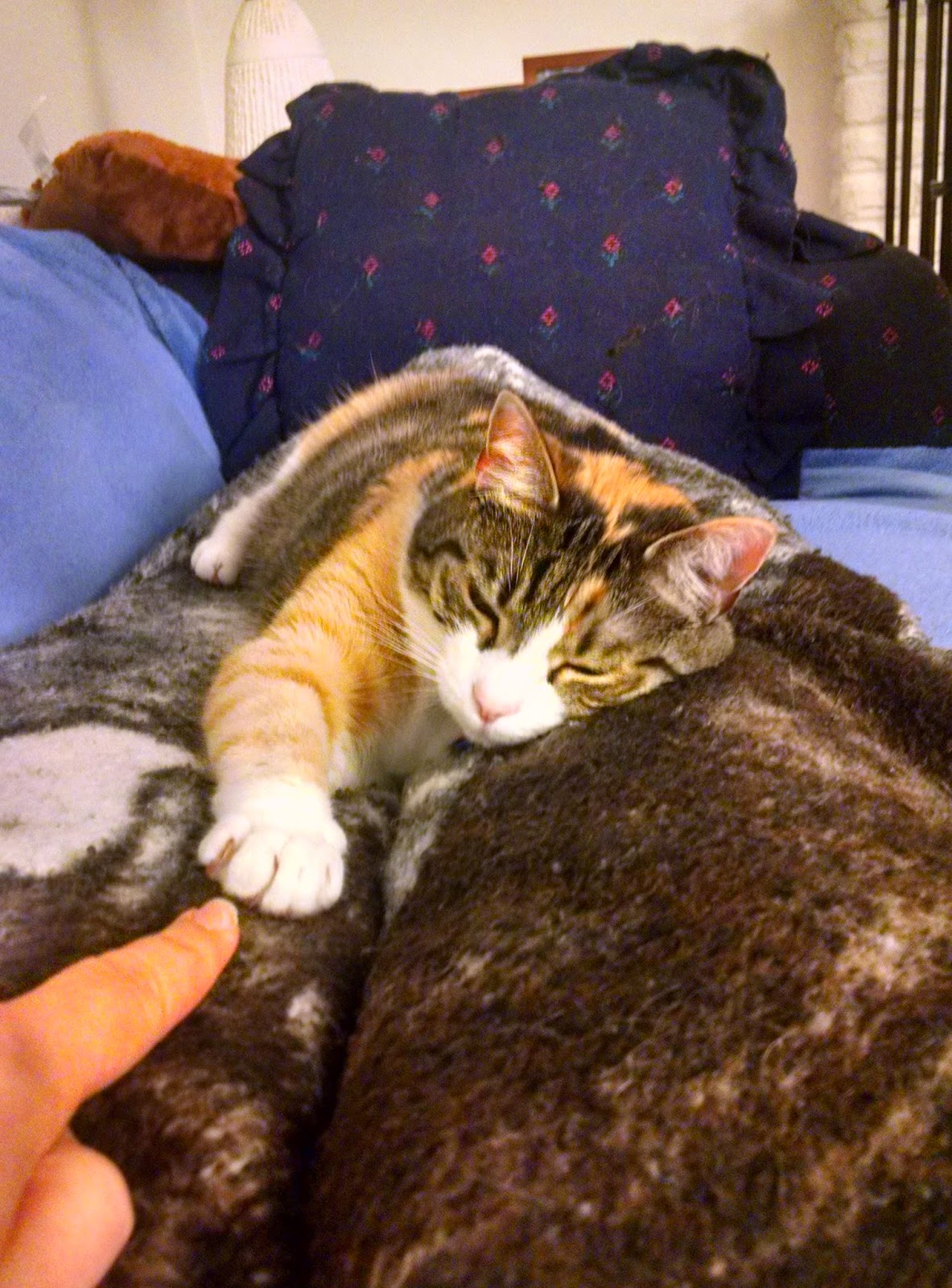 I am organizing tickets and hotel accommodations for my trainer's students who can commit to all 4 days at Rolex 2015 so we can all sit together and take advantage of the group rates. Right now that's 18 of us. More on that in a different post. I only mention this because the day started with a little drama about how people were paying me for tickets. I asked everyone that is going who would rather leave a check at the barn than mail it to do so by 10/31 because Mikey is leaving Saturday (11/1) morning and I will not be back to pick up money. On what planet is it ok to bring money after 2pm on Nov 1?

-Wake up at 8. Get husband moving too. Feed cats.
-Pack a garbage can and 3 bags of feed in the backseat of my truck while texting back and forth about mailing me money for Rolex because they were late paying me for tickets. Mind you my truck is a Dodge Ram 1500 that does not have the full size cab, it has a backseat but it's the squished one. Basically the backseat was getting full.
-Pick up my mom
-Get Sheetz breakfast. This is by far my biggest guilty pleasure. Ever. I love Sheetz runs.
-Go stop by a different farm 45 min away to pick up a check for Rolex from a different person.
-Go 10 min from there and pick up blankets. I not only picked up my 4 blankets and 2 hoods, but also picked up 5 other blankets for two other people. I crammed those in my backseat as well and it was just like driving the trailer, I couldn't see out my back window!
-Go 20 min back towards home to the barn to pick up Mikey. It was 11:15 by this point. Texting has continued and they didn't think they'd make it out before we left. They asked if I had everyone else's money. I said everyone who was leaving it at the barn had left it, and everyone who was mailing had mailed it, so I would have all the money by Monday.

Saturday had nasty weather around here, switching from rainy and cloudy and windy to sunny and back to rainy. It was awful. I got the trailer packed up, squared up with my trainer and set up the next time we would lesson (Thanksgiving week since I took the whole week off!). I caught Mikey, put on his shipping boots, and off we went!

Here's a view of his new barn as we drove up:
One of the ladies who trains one of the boarders and in general helps out met me and helped unload the trailer and get Mikey settled. She's super perky and high energy and OCD just like me. We get along. I felt very welcomed! The owner met us a little later, and we went for a ride after bringing the horses in and evening feed.

On our way to the indoor, we had to pass through the back part of the barn that is under construction, and between that and the barn doors that move like very quiet garage doors, he lost his cool a little and stepped into me as I tried to get him to walk forward, then put all his weight on that foot as he twisted to look behind him. I thought he broke my foot. I was gladly mistaken. That would put a damper on me working off some of my board.

I got home late, and my husband was visiting his parents, so I had the kitties keep me company Saturday night. Thank goodness we changed the clocks back! I needed the extra hour of sleep.

I came out for morning feed and stalls on Sunday as I will be taking over AM work on Sat and Sun while Mikey is at this barn. I took Mikey out to walk around and explore the fields by himself before he met the other horses. Its very windy at this barn, so I stuck him in his hooded clothes.

The owner brought out the horses at the bottom of the pecking order first, an older horse who proved he is not too arthritic to be ridden, and her blind thoroughbred/appaloosa that Mikey used to play with a few barns ago. They tried to chase Mikey around, but he ignored them and didn't give to their pressure, so they took off hopping and bucking and playing by themselves.

The next horse out is a young horse who is still very green and can be a bit of a pig. He hung by the gate, then realized Mikey was there and tried to pressure him, Mikey finally kicked out at him and made him stop. The young horse went to the others and jumped around with them some.

The last one out was the owner's horse who has quite a lot of attitude and is an alpha. He made a beeline to Mikey and tried to run him, but Mikey didn't run, but gave to the alpha's movements, just walking around and little trot. Eventually the alpha went off and every horse except Mikey ran around the field jumping and bucking and carrying on. Mikey was like whatever, and ate grass. They eventually settled with the alpha and Mikey grazing side by side nicely. We're thinking he'll fit in at the number two spot. He's not going to take crap from the other three horses, but he's not about to answer the challenge the alpha put out. He's been number two in most of his past small herds, and he's a disaster and mean as the number one (last winter when the alpha went south for part of the winter).

I helped with stalls and learned their morning routine. Mikey had been out for a couple hours, so I went and grabbed him and finished his body clip while there was a little construction happening. He was not dealing well so I pilfered some of his alfalfa pellets (hey I brought them, so I can give him handfuls!), and stood him near where the guys were pulling wires through the rafters and making noise and fed him while he watched. He was instantly better and content to just watch the guys work.

Here's the wall of mirrors at the end of the indoor arena. I tried to tell Mikey there aren't horse eating gremlins living in them, but he doesn't quite believe me yet. He's not bad, just being a little looky. I've been using his double for the last two rides, and I probably will for one more, only because he can spin on a dime like a quarterhorse and the curb gives me a little more control to stop that lateral spin. 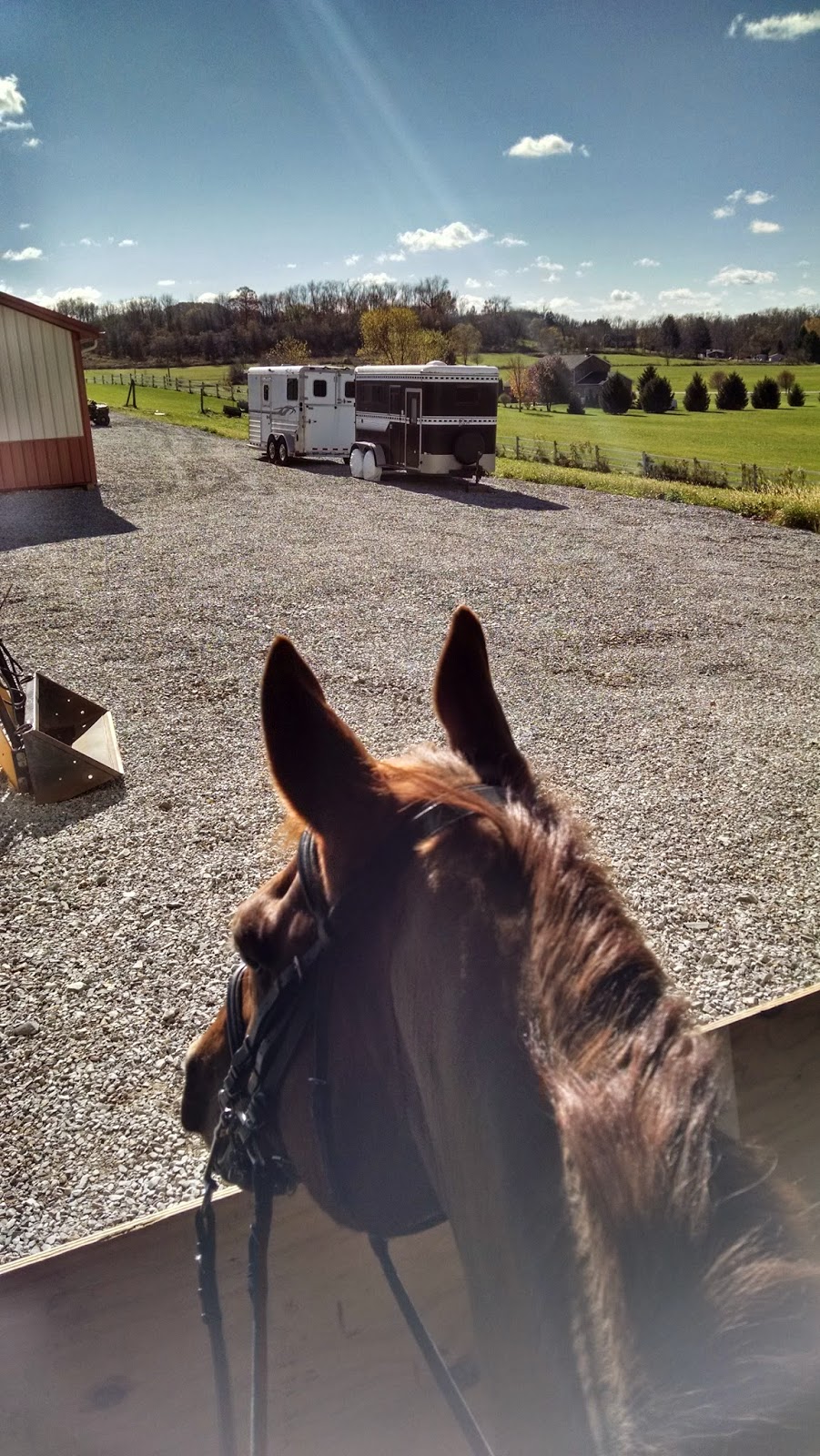 I cleaned up and closed up and sent Mikey back out to see his new friends. I think he was looking for his old alpha and misses him. I feel bad! But the alpha here will be his buddy soon enough.

I did a little exploring when I left. I had seen a standardbred training track on Google earth, so I decided to drive past it. On my way I drove through this historical covered bridge:

I found the track and attempted to get a pic of it from my moving car. It didn't work so well. I asked my barn owner about it, she's going to see if she can find out who owns it and maybe we can go on an adventure and go gallop there.

I came home and took a nap. It's been a long exhausting weekend.
Posted by Codex Dressage at 12:21 PM