I'm slowly working on the posts that document our visit to OSU. I want to be thorough, partly to share, and partly so I have a written record of what happened because it was a very expensive and eventful week.

Mikey is home, and finally settled into his new routine where he stays in his stall at all times except to have his bandage changed. That is what his life is going to be like for the next 30 days. After that, he'll be allowed to handwalk for 15 min once a day for another 30. After that it looks like we can evaluate his soundness and comfort and start adding work back in. Somewhere in the second 30 days he'll have an APS treatment. That stands for autologus protein solution, which is a solution of plasma and white blood cell proteins that will help reduce inflammation.

Here's what his leg looked like Saturday morning. I wasn't thinking when I took these pics as you can barely see the stitches. He has two incisions on the inside of the hock, and two on the outside. The small one on the outside is the one that's still oozing, and the biggest is the other one on the outside that's on the widest part of the hock. Sorry for the poor descriptors! 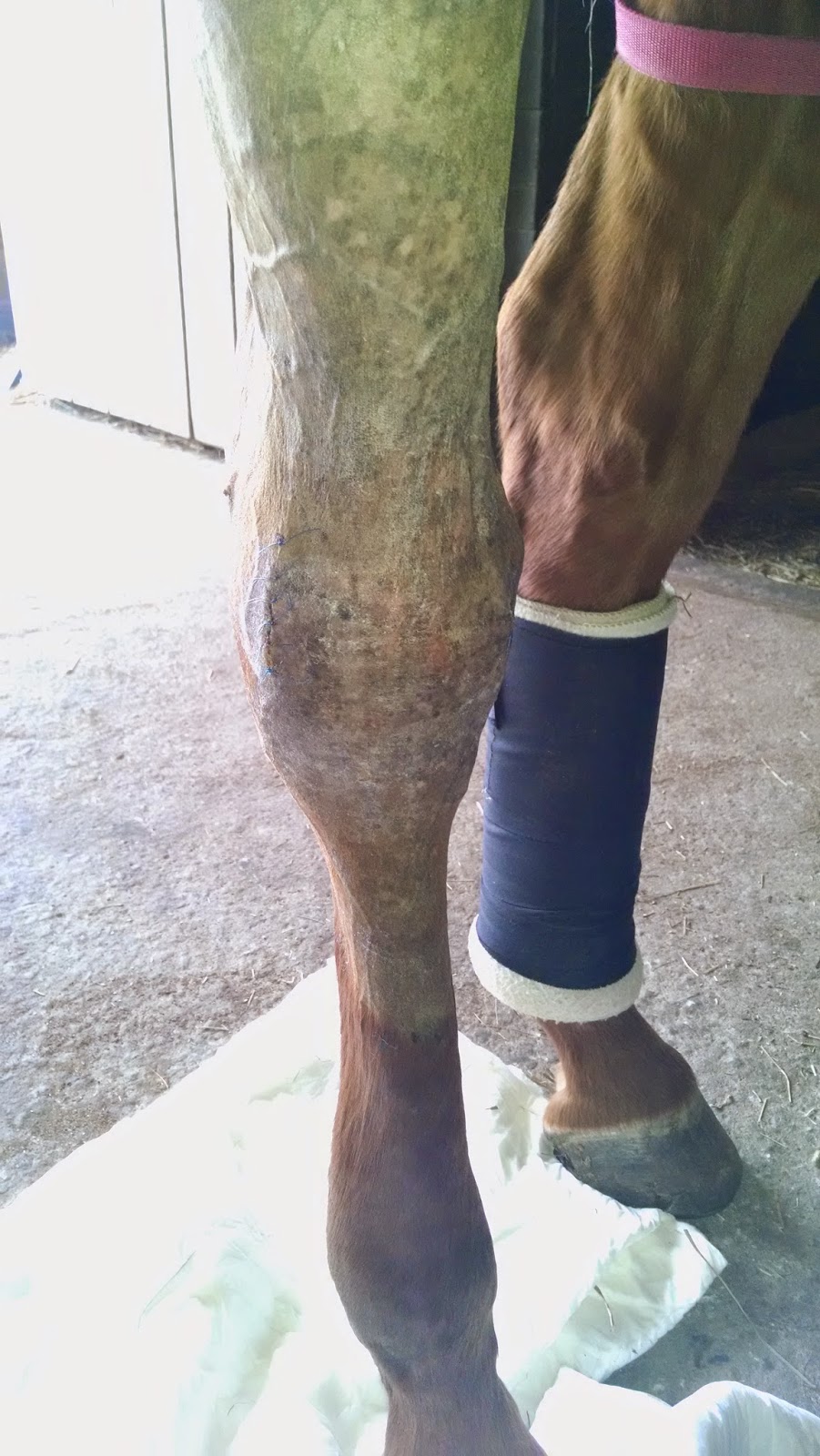 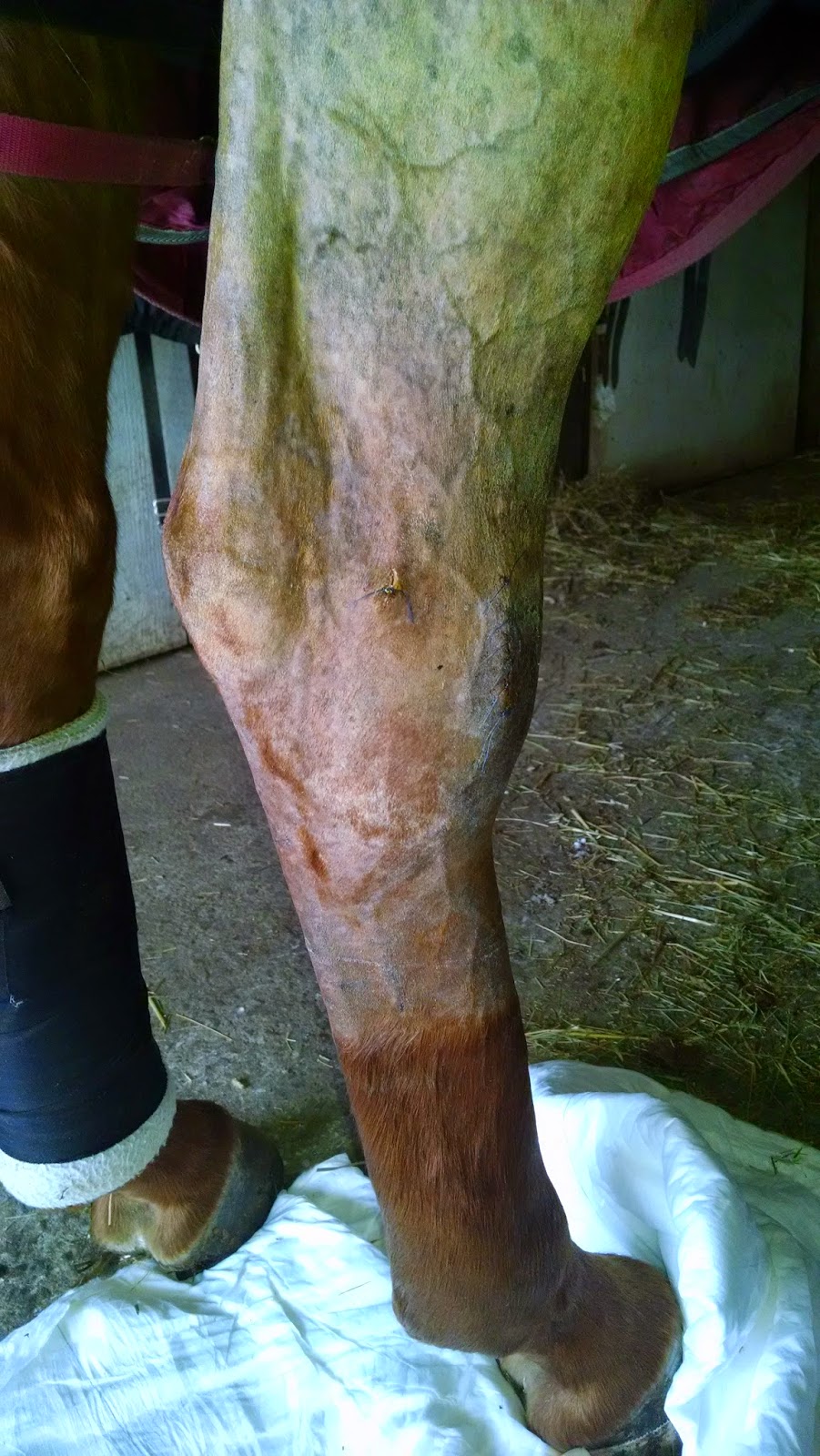 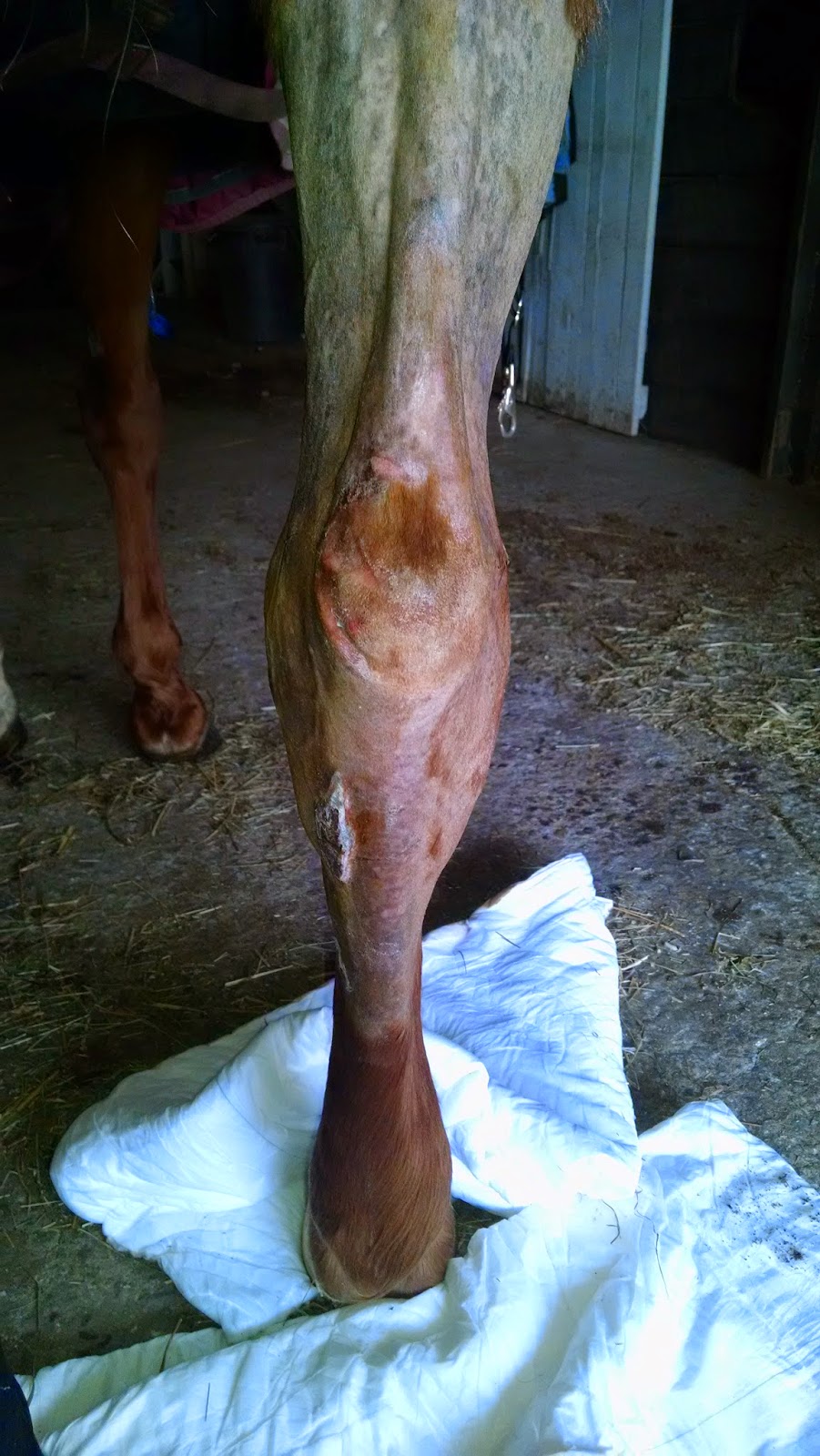 I know the vets at OSU said there was a lot of swelling still, but we looked at it and almost cheered because there is less swelling than before the surgery. The back of his hock has some creasing, I'm guessing that's due to the amount of swelling he had that isn't there anymore and the hock wrap holding everything together. I hope it goes away, but if not, oh well. Yesterday he was climbing up his stall's walls and pacing and general panicky unhappiness. We weren't sure how he was going to make it until the stitches came out (7 more days), let alone another 3 weeks. Luckily today he seems to have settled in.

He got a shot of Exceed today because of the incision that is still oozing synovial fluid, and the OSU vets were concerned about infection. Our vet will see him on Wednesday and give him another dose if he's still oozing.

He chewed on the wall yesterday, so my job today was covering his wall in hot sauce to make it less appealing to chew on. Mikey thought it smelled funny!

I hung around Sunday for a while and my trainer offered to let me ride her 3* event horse (3rd level dressage proficient) on the flat while she taught another lesson. Last time I rode Cody, we did not get along in the slightest. I was not a good enough rider to not piss him off, and he had a low tolerance of not perfect riding. He tolerated me for about ten minutes before threatening me, and since he's an athletic SOB and I was just getting him out and about while my trainer was away, I bailed on trying to do actual work and put him through his back in the walk and we went for a road walk. Last time I also didn't have a choice of sitting trot or posting. I was posting because he was too big a mover for me to be able to sit.

He's much more educated now, and has learned to be polite even when his rider makes mistakes. I am a much better rider now, and didn't piss him off as badly (anyone who's not my trainer is going to piss him off!). I could also sit his trot easily! I had a great time with him. He made my holes very obvious, and was patient with me and all my mistakes. I'd love to spend more time riding him, but he is aimed at Rolex in April and playing rides will not be in the cards really. I got to play with his extended trot and a single flying change because I couldn't keep my act together to get the other one. I'm too afraid of messing him up! His extended trot is awesome by the way. Little bit of driving seat bones, gentle working the bit and he gives shoulder popping goodness. Tilt your hips forward out of the driving seat and back to collected trot he goes. I giggled while I played with it!

My trainer didn't mind my mistakes, she said that he's going to be for sale after Rolex and needs to get used to someone else sitting on him, and she likes to see him go too. I know he can be difficult in the dressage ring, but I wouldn't pass on the chance to take him down centerline! He has a lot he could teach me.

I'll leave you with a quick picture of Cody!