The Year of Major Events

I decided to do a year wrap up since this has been quite the year.


In January, we had just picked up and moved from my winter boarding situation that didn't work, back to my trainer's operation which had moved to a different barn with an indoor. We spent most of the month battling hock swelling with on and off lameness. The flying changes were continuing to come along, and I learned how to long line.


At the end of January I learned that the swelling was due to a hock chip that had to be removed. Surgery was scheduled for the first week of February. OSU corrected the diagnosis by pointing out a fracture bed and that the single chip was actually at least 8 individual chips. They also did an ultrasound of the tendon on the inside of the joint and found it was torn.


Mikey had surgery to remove the chips in February. Surgery went well, but one chip couldn't be removed because they couldn't find it. Mikey's 3 day trip became a week long trip when Mikey was in too much pain to drive him home and we opted to do stem cell injections and my truck's brakes gave out.

Mikey's prognosis at this point was 70% chance of him being able to return to full work and competition sound. It was soul crushing news. I'd still have my friend, but we might have to rework our plans.


February and March were spent in freezing cold, riding training horses as available, and a couple rides on then 3* horse Cody. Mikey continued to heal nicely. He tried to colic mid-February and so we started walking him for five minutes every other day to help him settle on stall rest. 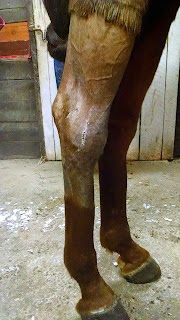 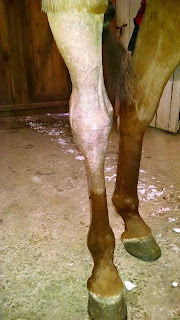 At the beginning of March, Mikey went back to OSU for an APS treatment and checkup. The surgeon was very pleased at his progress and soundness. He was mostly stiff instead of outright lame, but still lame. March was spent healing more.


April had some big events- Mikey was cleared to return gently to work and for turnout! Riding was very depressing at first- he didn't feel like my old Mikey. He eventually started to feel better under saddle and I used long lining to help him learn to carry himself better.


The next big thing? Trainer and Cody went to Rolex and finished their first 4*!


May brought a change of venue- we went back to the original home farm.  Our winter home didn't work out for us to stay long term. I spent a lot of time working Mikey very through and improving our connection to the bridle. It was good solid work for him.


We had a lot of fun in June. I built some cavaletti's to help build Mikey's butt strength.


And one of the ponds on the property overflowed when we got a crapton of rain. Mikey learned to be a water baby long ago, so we had an incredible time scrapping our dressage work and having fun cantering through a pond.


July was a big deal for us. Mikey was still sound and working 3rd level again. I rode with German Riding Master, who was very pleased with Mikey's progress since last December, even if the changes hadn't worked out yet. I sent in the entry for our first recognized show back in action! We also competed in a schooling show, riding 3-1 and 3-2. We had our two best tests to date, yet they were both still 59%. It was depressing, but I cried anyway because Mikey had beaten the odds and come back and competed at 3rd level. Even better than he did before.


August. August was... bad. Mikey died suddenly on August 4th from an aortic aneurysm, right in front of me. I lost my friend and partner. I was crushed.


August also sent me Penn. Quickly too. For that, I am forever grateful. Looking back, without him, I would have been... in a bad place. He gave me something to focus on besides Mikey's loss.


But August decided it wasn't done with me yet. It threw a kitten into my life who joined our family. August netted our family +1 family member.


Penn learned to jump in October! He showed that he was not going to be a jumper. He got a fancy new halter for shows with his name. He went to a hunter show and then a hunter pace. He was so tired- he spent the next few days resting.


In October we also were able to pick a saddle- the Stubben 1894. It was ordered! We just spent more time in October schooling and working on tempo and steadyness.

November brought yet another schooling show! Penn and I went off and did Training 1 and 2, to a tune of 59% and 62% again for a tough judge.


Penn and I also had a "coming to Jesus" over the clippers and rearing and bolting. I won because Penn got his first clip job ever! Penn retaliated by being obnoxious in his field and getting the other horses to rip my blankets to shreds. He'd been doing that since October, however I finally broke down and bought the SmartPak Ultimate Turnouts for him. I was off Thanksgiving week and opted to clean up Penn's clip job that week. This time we used drugs to make him quiet so I could clip him properly.


His new saddle also arrived in November, right before Thanksgiving!


December saw us go to another schooling dressage show, where we completely rocked and scored a 63%, 69%, and 68% in Training 1, 2, and 3 respectively. We won everything. Penn just keeps getting better and better. Penn saw the German Riding Master who wholeheartedly approved of him.


We traveled to a new barn for a lesson with Trainer and ended up making winter boarding plans for January to March. Penn ended up moving early! He continues to make leaps and bounds in his work. We have a show schedule planned for next year and goals for next year!


This year saw Mikey's surgery, recovery, comeback, and then untimely death.
Penn arrived in my life. So did Sophie. Both have become part of the family.
Please 2015, let the last few days go by quietly. It's been an overly exciting year with major events. No more please, for a long time.
Posted by Codex Dressage at 11:07 AM

Email ThisBlogThis!Share to TwitterShare to FacebookShare to Pinterest
Labels: tbt