I am finally feeling better, but I haven't ridden Penn yet. It takes a lot for me not to ride- but not being able to breathe is enough!

I long lined him Friday night... I also had to put him back in his place in the cross ties. I don't tolerate fidgeting and moving and pressure on the ties. I just don't. I find it dangerous and rude and annoying. He had almost a whole week of no rules other than behave walking into and out of the field, so he got a quick reminder that he needed to stand quietly. He then proceeded to look like a sad puppy... because he really is just a big puppy!

Anyway, we long lined Friday and I'm making good progress with the canter. Trainer wanted me to apply strong half halts under saddle when the diagonal pair was on the ground, so I was able to apply that to the lines when I can actually see his legs. Worked super well! I am trying to not do as much for him from the ground, but

Penn decided to have a mind of his own when I stopped him to rearrange the lines, he backed away from me, wrapped the lines around his neck and was just like, "Look! You can't make me." It took me a few minutes to get him safely reset, then he got a couple smacks with the whip to get forward thinking again. I had to remind him a couple times I was in charge, and he finished his work nicely.


I long lined Penn again Saturday, and had a slightly less productive work in reference to bettering the canter, but Friday's work had stuck because he didn't immediately zoom off on his own when I asked for it. He picked up a quiet, but still leaning in, canter each way. I only lasted for one or two canters each way before I had to stop- I never used to get dizzy lunging, but it's a fairly new thing for me and my illness made it worse.

Both days I worked more on Penn's pi/pa basics. I've scrapped the hind end for now (more towards pi training, and to be honest, I'm fascinated by passage not piaffe) just because I don't think he needs to learn to sit and plant himself at all just yet. Seems like a can of worms I'm not ready to have opened! He knows to pick up his hind feet if I tap a hind leg, and for now that's good enough. He's super tuned into a tap or two on the front of the front leg's cannon bone though. I sometimes match each tap with a cluck to help him understand I want his feet to move.

He's so responsive to the leg tapping, that I wasn't sure where to go with it other than to put it into motion in the walk while the indoor and wall are available to me. I don't have a bamboo pole or anything, so I've taken to using the handle end of my dressage whip- no lash and it's a good solid rubber handle. He found it a bit confusing to hold his walk on his own while my attention is elsewhere, but figured out quickly that's what I wanted.

So as I watched Alfredo's videos, the pole he uses to encourage passage almost acts like something the horse needs to step over- letting the horse move the leg into the pole, and forward with the horse, and near knee height, he's always encouraging a big step.

Taking that thinking into plan, I found if I get Penn's walk going, then hold the handle of my whip at low cannon/fetlock height and let it bounce against his legs as he walks, he actively takes bigger and slower steps. I match each step with a cluck, and have him continue until he's taken about 6 big steps in total.

He caught on almost immediately- prompt big steps, then he got tons of praise. I only ask for the steps once per long side of the arena, and I don't drill it for more than two or three long sides because he's young, it isn't a huge part of his training, and I don't want to overstimulate him or blow his mind.

I guess I'd like to eventually have someone drive behind him and be in control of where he goes and his speed and gait, and I can encourage the bigger steps. The whole goal of this isn't to create a good passage or one with a rider, just an idea in his head that I can hopefully tap into for a loftier trot while riding so his first level trot work is a step above most everyone else's and not as far behind the imported fancy warmbloods we that we'll be competing against. This subject gets a lot of attention in this post, but in reality I spend about 5 to 10 minutes tops working on it, and usually at the end of long lining since we're already on the ground working in hand (so not much more than 15-30 min per week).

While I spent the entire day Saturday at the barn (working with Penn and then just chatting with BO), Husband was hard at work on my trailer all day Saturday!


Backstory: before we bought the trailer, the tack room door experienced a few too many slam opens. Every time it was allowed to bang open, the screws would pull out of the wood a little bit and then eventually the door became sticky to open and close.

On Friday, the door gave up and fell off its hinges. Husband was able to use the lock on the door to help hold it in place for the night so he could fix it Saturday. I got an alarming photo of my tack room door on Saturday while I was at the barn- it was in pieces of rotting wood on the garage floor. By the time I got home, Husband had created a new oak wood frame that goes around the foam and under the plastic skin. It's a new solid surface for the aluminum framing to be screwed to, and it means the door opens and closes properly!


I had Hawk from No Longer Fiction ride Penn on Sunday for me. I'm still not feeling up to riding, but I think Penn had enough long lining for a few days (I sure did!). She's a wonderful sensitive quiet rider, which is exactly what Penn needs since he is very sensitive to what his rider does (as she found out!). She did a lovely job putting him through his paces and figuring him out. It was nice to see someone else ride him. Thank you Hawk! 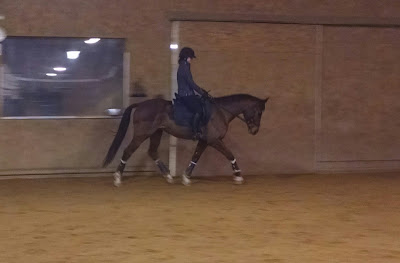 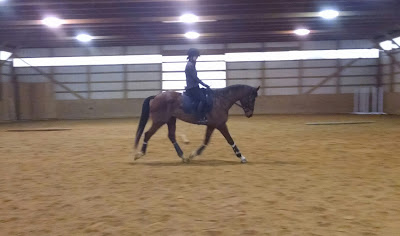 BO also gave me a window decal of a dressage horse for my trailer- family sent her a whole stack of them and she was like, would you want one? I was like YESSSSSS.

So obviously we stuck it to the trailer Sunday afternoon after I got home. It's a bit hard to see- I guess I never realized how tinted the trailer windows are... it's kind of hard to see the decal without it being back-lite or something.


The truck is next on the list of things to be updated, and hopefully the trailer is back to the barn sometime this week- Husband needs it here to make sure all the hookups and cameras work after he installs the new radio thingy. However, we need our driveway back!
Posted by Codex Dressage at 7:00 AM