So on Sunday we went to the "banned" schooling show (I haven't decided what to tell GP Trainer about it since she said, "no more showing second or third" and "keep him at home", haha). First things first, I'm going to do some product shoving, because I LOVE THIS PRODUCT.

Penn has raging diarrhea when he travels. It starts before we even leave home barn. I braid his tail and pull it over the butt bar to try and protect it. I sew his tail flaps up (BOT sheet) or tuck them up (smartpak sheet) to prevent diarrhea from being smashed into them. He generally has a nervous undercurrent running while he's away (excessive stall walking happens away from home) and he's a poor eater (both hay and grain).

GP Trainer is sponsored by Uckele, and I mentioned those things to her offhand and she gave me a sample tube of GUT Paste when I saw her last. I gave him a dose Saturday, and another dose Sunday before we left.


Obviously this is just one outing using it, but I will never travel again without it. I found Amazon had the best price (purchased through Big Dees). I think if you buy enough of them though, Uckele will give you a bulk discount if you buy direct from them. I already added their daily GUT powder to Penn's SmartPaks (long story short, I didn't want to pay $9 shipping for his SmartMuscle so I added it to try it out).

Oh, and the G.U.T. products are all legal to use- they contain no banned substances! 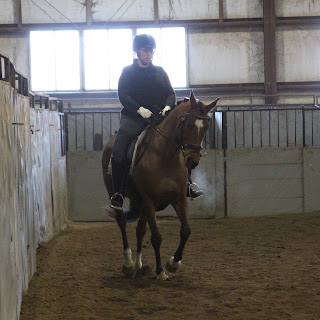 Anyway, sorry to push a product, but I really liked Penn on it and I know there are people out there who have similar nervous horse problems.

Back to the show itself.

I didn't really have the warm up I wanted for my tests. Some of the boarders at this barn were in warm up riding and were cantering laps around the inside, which made lateral work and going a different direction really difficult. They also got a bit close, but such is life and you have to roll with the punches. 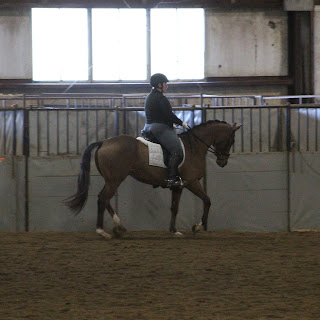 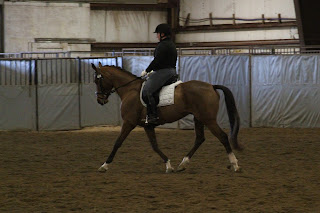 My own comments: I need to practice my centerlines. For like, an entire ride and then some. I lost so many points at this show for stupid stuff on them. Much better trot lengthening than he used to give at the start. The leg yield right got an 8! It almost looks like the haunches are leading... but I didn't see a comment about that, and she wouldn't have given me an 8 for it if they were. The leg yield left was a little stickier than the right and earned a 7.5. Excellent stretch circle, per Penn's usual. Cue the first of 3 terrible shortening-of-the-reins from a stretch on my part... need to review that too. He was very much against having right bend for the next bit of trot work, and we lost points on all the right bend work. He stepped right into the halt from trot, which was awesome. Hopefully with some work we can do away with the little bit of fiddling behind, because that ruined it by preventing a clean halt-trot transition (note how the first step he had to get back under himself). Good left trot work, good free walk, second terrible shortening the reins. The canter is much improved, but he looked to the outside in the lengthening right and it stayed conservative. Wonderful shallow loop, and a slightly clumbsy simple change through trot. I had to tap him 3 times with the whip in the 15m left lead circle to get him to keep going. I never really got him back from the left lead lengthening, he spooked and fell out from under me. I walked him, put him back together somewhat and went immediately into the next shallow loop. A better trot lengthening and a better centerline to finish.

He still gets me with the flinging hind end (still working on straight yo), but it was more tracking right this time- you can really tell when he's straight on in front of the camera.

I just can't win with the collection thing. She wrote: "keep working on thinking forward for the working gaits at this level, sometimes too collected, especially at canter." *facepalm* But I kind of knew that. He's just not adjustable with his collection yet. It's all or fall-on-our-face nothing right now, and I'd rather have all.

I ran through the lateral work in warm-up (I had two tests between 1-3 and 2-3), but some guy decided to hand walk some girl's horse ON THE RAIL of the warm up ring to cool it out. Penn got his confidence in the haunches in shaken because this guy appeared in front of him and Penn didn't know how to cope with that. I tried again on the next long side and he still wobbled. Didn't have enough time to boost his confidence again.

More of my comments: Seriously, WTF is up with my centerlines and halts? He must be so unsteady on all 4 feet that I didn't even notice the shifting. Better mediums- he had a little more to give for them to make them different from his lengthenings. The lateral work suffered as a direct result of our warm up's lateral work. I'm still happy with it because even though he wobbled, but came back to me and kept trying. The halt rein back was an oops on my part- he wanted to fall out of the trot early (I've been practicing halting at C and A), so I had to push him through it and then halt quickly at the letter while falling down onto the forehand. Then he backed up crooked, for the first time ever. The walk needed march (but it falls apart with more, see canter). The first turn on the haunch got stuck, but the second one was good. He stretched way out on the free walk, but at the cost of marching, and then I did my third terrible shortening-of-the-reins. Begin the left lead disaster. The medium was conservative and I fought him from the moment I asked him to collect through to the moment we attempted to simple change left to right. It's all a strength problem. He seemed happier to go on the right lead, and I was very pleased with his right lead medium because it felt very powerful (probably because it stayed STRAIGHT), even if the judge found it conservative. I had to really work for the serpentine, and he was just about out of juice by then. He tried to break early on the diagonal before the simple change, which caused the simple change I'd been preparing for to end up a jumbled mess (push through the bad, only to end up doing bad later). I need to practice making the simple changes happen later on the diagonal so he's not thinking about quitting so soon.

There were so many places in this test where if we had managed to do just slightly better, we would have gotten over 60%. And I'm not talking about the 4/20 for the left lead serpentine, the 9/20 for the left to right simple change, or the 10/20 for the right to left simple change (man, we botched A TON of the double coefficient moves). The entering centerline should be at least a 6 or 6.5, I just seem to be riding them poorly and letting him twitch around, same with the final centerline. There's the 1.5 points it would take to make 60% in that test. The major mistakes we had were all strength related. He simply just couldn't hold himself up and do whatever the move was. I'm excited to see how much stronger he is in a month at the final show!


The judge wants more forward, even in collection, for greater activity and carrying ability. I totally get what she means and can see it in the video. When Penn gets cruising in trot, his gaits have a bigger quality to them- engagement/collection becomes linked to expression. We can do that in trot, when I remember to let it happen. We cannot do that in canter because splatting happens. He's just not ready for that yet, so we er on the side of too collected while he builds the strength. And so we will continue to test it at schooling shows until has does have the strength. I don't think it will take long!


Overall, I'm pleased with his progress (and it's not just better scores- this is schooling, so it doesn't quite count for me). He's much steadier on his feet, and for the first time, we didn't get any comments along the lines of "needs more engagement" or "needs more collection" or "needs a more uphill balance". We got comments of "too collected". I'll take it!
Posted by Codex Dressage at 7:00 AM