No tests on Sunday- of course that doesn't mean I didn't look! I checked out the regular 1-3 test that day and there were scratches and very few entries... so technically I could ride and come home with a ribbon maybe! But nope, Penn and I were done, and happy to be done.

Instead, I headed down to one of the championship rings to watch the First Level Freestyles. Some were good, some were meh, and some were cute as can be (Chincoteague pony riding to Mario music!). The judges absolutely could not agree on these tests though- they had some of the biggest score ranges (72/59% on the same test) of the weekend.

It got too late to do Saturday, so in the morning before we headed home, Karen and I got a pic with the ponies in front of the regional champ sign: 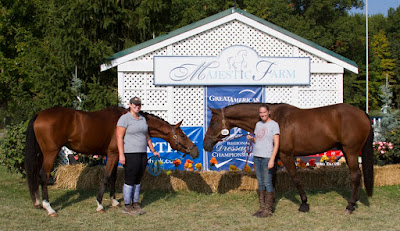 But here's what it really should have looked like:


Of course their 5 minute interaction made them BEST FRIENDS and Hampton totally took Penn under his wing since Hampton is the guard dog of his turnout.


Penn decided to make the morning WAY too exciting. I set him up with a full hay net and went to get smoothies with Karen. Husband stayed behind at the stall. Penn somehow got his head stuck in his hay net, pulled back against it (because that's how he rolls), kicked the walls, then busted out of his stall through the stall guard. In the process of busting out, he opened the net, flung hay everywhere, and managed to connect with the bottle of molasses that I've been using to make him eat his grain. It splattered EVERYWHERE. On the stall fronts, fans, and on the dog sleeping peacefully next to his stall front. Glass, molasses, and hay everywhere. He then trotted out to the space between barns and got distracted by the other people and horses. Husband did great in catching him- some nice horsey strangers helped keep Penn distracted while Husband came over with his halter. He seemed lame on the right hind, but otherwise unscathed. Husband called me to tell me and I came hurrying back and helped clean up- we tossed all of the hay just in case there were pieces of glass that we missed. I checked Penn's hooves for glass and jogged him when I got back, and he seemed fine. He must have just stung himself.

I finally noticed a problem- he managed to twist his right hind shoe enough that it was pulled back on the hoof by a solid inch. At least the clips were still on the outside of the hoof wall and not in the sole. Off we trekked to the show farrier, who promptly pulled the shoe and pounded it flat again, and tacked it back on. I only had one super concerning moment during this, when the farrier picked up the hind leg to take the shoe off, Penn leaped out of his hands like he'd been stung. That made me worry there was other damage to the leg, but Penn settled right after and was a gem. I've only used a show farrier once before- Mikey pulled a shoe in his stall at an event and the farrier tacked it back on. This guy did a good job and charged A LOT to pound the shoe and put it back on... like almost what I pay my farrier when he resets all 4 shoes using the same shoes.

When Penn and I got back to stabling, he and Hampton exchanged loud whinnies. I swear, five minutes together and they were attached!


We had a less exciting drive back home (OMG thank goodness for that. I've had enough excitement, thank you very much!). We made it back home with the guidance of our truck pig, G-Force! (named that way because if he moved on the dash, that means there's too much g-force on the trailer and Penn). Barn owner happened to have him in her purse when she brought the truck over, so we were like, let's keep him in the truck and rub him for good luck, lol.


All in all, this trip was wayyyyyy too exciting. Truck dying, spooky Penn, forgetting my test, Penn tweaking his shoe. Did I get all my bad things all in one go? Did it have to pick this particular show?

But there were so many great things- meeting Karen and Hampton and getting to celebrate their ticket to Finals, meeting Cob Jockey, and making a great finish in a large class despite errors and a terrible prep test. We got home safe and sound too, which is both exciting and very good, haha!
Posted by Codex Dressage at 7:00 AM