Well it isn't boring when I'm going to blog about it, dying leather, soaking leather, and in general ending up filthy myself while my leather is spotless. Ah, the way of everything horsey.

So due to the intense riding schedule I have this week (Monday clinic, Wednesday clinic, Friday lesson, Saturday trail ride, Sunday horse show), I needed to have my tack spotlessly clean for basically a week. So I thought, I'll clean my bridle and saddle over the weekend, no problem. I also saw Leather Therapy Touch Up Dye in a Leather Therapy product review on Horse Nation and decided to give it a whirl while I had my bridle home.

Now, Mikey's Micklem was suffering a life of I guess too hard cleaning and not enough cleaning maybe? I donno, either way, the bridle never softened up and I had problems with the black fading off. The bridle looked black from a distance, but if you took a close look at it, you'd see things like this:

My bridle is the only one of the Micklem's in the barn to suffer this fade. I take good care of my tack- I never leave it out in the sun. I try not to let it get soaked wet, and if it does, I wipe it down as soon as I get into the barn and run some leather balsam over it (or if I know it's going to get wet, I do that before riding). I clean it, and am in general very nice to it. It sees hard use, but never abuse to the leather. So it irked me that I had this fading.

I also decided while I was going to all this trouble of making the thing look nice, I was going to make it soft as well. Trainer has a system with all of her new tack: buy new bridle/reins/breastplate, put in bucket or bag, soak in neatsfoot oil for 2-4 hours. All of her tack is soft and supple with no cracking, even on some of the oldest leathers. She's been doing it for years, and her stuff sees hard use because she rides 5-8 horses a day, and the bridles have never given up.

So last Friday, the bridle got a good cleaning, then I nervously busted out the leather dye and did a test section on the noseband buckle. If I screwed up, at least it would be covered by another piece of leather. It came out very nicely! It was almost impossible to get it near the keepers, so I tried smudging with my fingers, then eventually gave up because when it's in use, you'll only see the keepers anyway.

The black was in fact so black, and my bridle so faded everywhere, that I had to cover the entire bridle in dye (nothing that sits against the horse or the padding). It has an easy to apply applicator that you run over the whole thing, so it was fairly easy to get a good even coat on everything. Quick drying too. Highly recommended. I had very limited dye wipe off too when I gently cleaned it later. I'd clean it several times though if you put it on a saddle just to make sure it doesn't come off on your clothes.

As you can see in the background, and the poor lighting, I did all of this in my laundry room in the basement. We have a huge laundry room- shelves, bars to hang clothes to dry, hooks to hang things, drying rack, washer/dryer, double stationary tub. I brought out one of our big folding tables and set it up too. Poor Husband attempted to navigate my tack cleaning induced danger zone (oil, dye) in an attempt to clean his work clothes. Silly Husband.

Anyway, the next step was oiling the leather. I stumbled across a red/brown leather lead rope while I was down in the laundry room. I bought it a couple years ago and meant to return it because it was much redder than I liked, and it didn't match Mikey's brown leather show halter. I never returned it, so it's been sitting in my basement in the horse boxes. I decided I'd pull it out and oil it too and see if the neatsfoot oil would help darken it somewhat. I cleaned it briefly, took off a bit of the red dye, then dumped it in a bag of oil. I hate inflexible leather lead ropes, so if I was going to use it, it needed to be soft and flexible. It promptly sucked up most of the oil I put in the bag, and turned what was left red. Husband thought it looked like transmission fluid. It came out much darker!

(Update: That lead rope is still oozing red, even after hanging out to dry for 2 days. I don't know what I'm going to do with it. I think I'll give it a good cleaning next, then use a leather conditioner- no more oil. It's plenty soft. I didn't notice, but it got red oily ooze on my white show pad. Not happy. The pad got washed with bleach immediately last night within an hour or two of it happening, but I have to wait and see how it dries. On the plus side, it got soaked yesterday when I hosed Mikey off and the water beaded right off. So much oil in it.)

I dumped the Micklem into two more gallon bags, dumped oil in after them, swooshed them around, then let all three sit for 3-4 hours. Every so often I'd turn the bags to redistribute the oil and make sure every inch was covered.

So after you let leather soak for a couple hours in neatsfoot oil, it comes out a bit sloppy.

I let it dry overnight like that, and then all day Saturday and Sunday. I wanted the oil to soak in, and it did. In the meantime, Saturday, I made a cake.

Does cake count as a fruit and vegetable when it has 1.5 lbs of zucchini and a pint of blueberries in it? I can follow a recipe, but I am not the best presenter. I managed to squeeze out the buttercream frosting layer from between the layers. Oops.

I ended up using my jump tack and bridle to trail ride Sunday. I thought, "This stuff is filthy! And stiff." So I brought it home to be cleaned too. Well, not the saddle. It's still at the barn in it's filthy state. It's time will come. After this week is over, haha.

I cleaned the jump bridle and dumped it in the bag of oil. Mostly dealing with it too this week because I have bags of oil now and I don't want to just throw it all away or pour it back into the bottle. I hate wasting the oil because it's like throwing away money. The jump bridle didn't soak up near enough of it! I also soaked my new grab strap. The leather that goes in the D-rings of the saddle was very stiff and bulgey. It worked in getting it soft enough to not cause the saddle skirt(?) to bulge. I also tossed Mikey's fancy show halter with his name in a bag of oil. I'm all about this now.

I finally put Mikey's Micklem back together. Very pleased with the result! A lot of the places where I had trouble getting the dye under the keepers seemed to have absorbed the excess dye while it was soaking. Who knows, but the couple spots where I couldn't get the dye are now dyed.


Also, Herm Sprenger Diamond Paste is incredible (available at SmartPak or Amazon). It is expensive, but incredible. After this whole experience, I'll never clean bits or metal fittings with anything else again.

I have some Korsteel Loose Ring French Link bits that have been sitting around doing nothing for 1-3 years. I bought two while I was eventing because they were $25 a pop and I used the same bit to jump and do dressage, so it made sense to have two since I had two bridles. The jump bit saw discontinued use in 2012, and so had been sitting on my jump bridle doing nothing, then was replaced with a rubber mouthed pelham and it hung in the tack room doing nothing, and then it was moved to my trailer where it continued to do nothing. Let's just say, I was good at cleaning leather, not so good at cleaning bits. 4H taught me to use toothpaste and a toothbrush, which never seemed to get it as sparkly clean as when it first came out of the store. I'd rinse my bit off rarely (now I do after every ride since I'm using a $230 HS bit), so you can only imagine how filthy the bits became.

I wish I had taken a before picture of the bit so you could see the incredible difference this paste made in cleaning it. I tried using it as suggested, putting it on a rag and then rubbing the surface, but the bit was so dirty that while it helped, it didn't help that much. I ended up covering the whole damn thing in a layer of the paste and letting it sit for five minutes while I cleaned something else. I'd give it a rub and wipe off the layer of paste and voila! It's looking pretty good. Yes, it still has some stuck on grime that I probably need a chisel to remove. I'm just impressed because after 5-7 years of neglect and poor cleaning that it cleaned up this well since 90% of the bit was covered in the same grime! Makes me wonder about the active ingredients in the paste, even though it says safe for skin and hands. It did remove the Korsteel black lettering from the mouthpiece, but oh well. I know it's Kortsteel and it's not like I'm selling it or something. I'll do some before and after with my second bit. Maybe. It's not as bad as this one was, but it's still bad.

I leave you with some pictures of my boot inspector, Penny. She managed to fit her head, front legs, and shoulders into my boot before deciding she probably wouldn't fit. 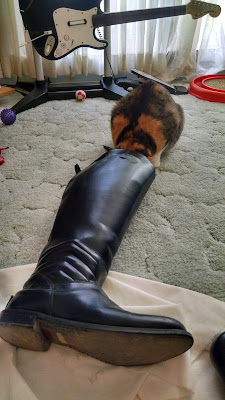 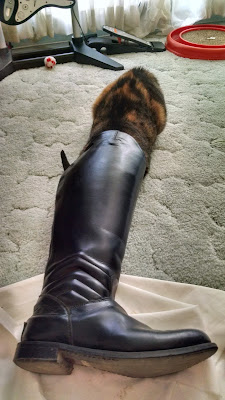 Posted by Codex Dressage at 5:51 PM