Way back in April, on Monday the 23rd, the day after our cow adventure, Penn got SI injections.

I took him to the vet office for it, and I'm really glad I did. After taking him to the office for his lameness exam and for SI injections, I think anytime he needs something like this, I'm just going to take him to the office. I wasn't charged an office fee either, unless I missed something on my bills. Everything was available right there, and the stocks were very useful for keeping Penn contained.

The vet started by doing an ultrasound of the SI area, and she pointed out where the injections go, the bowels are (where she doesn't want them to go, duh), and we found his kidneys because I was curious where they were since everyone always says "if you're saddle is too far back, you're sitting on their kidneys." Umm, not only are they further back than I thought, they're also lower than I thought. If your saddle ends up there, you'll know it's blatantly wrong!


After a beginning ultrasound, they drugged Penn up, put him in the stocks, and started scrubbing his back. They were happy with how clean I keep him because it takes a lot less scrubbing when the first few rounds of scrub don't come away muddy.

SI injections consist of 4 injections: 2-3" long needles and 2-8" long needles, all are ultrasound guided. Two go in each side, a short and a long. Of course I never asked what was injected, and I continue to forget to ask so we'll never know.


I also learned just how hard they try to keep absolutely everything sterile- the vet put on a set of sterile gloves, the ultrasound head got its own sterile cover, rubbing alcohol was poured over everything every five seconds as they worked to make the ultrasound clear and moving smoothly. The level of sterile they want to keep made me decide that I will never, ever have him injected in the barn. He'll always go to the clinic. I asked, how on earth do you do this in a barn? She said some places are better for it than others, but they always have a dust problem and the environment is never as clean as they want. My barn is one of their more favorite locations for injections, but the office is their favorite.

They started with the right side, which was the less painful side for Penn. They twitched him and started the injection process, which was fascinating. The 8" long needle goes through the back muscles to the "front" of the joint, and 3" long one goes down from above "behind" the joint. The right side went great, and then they started the left...


As soon as the 8" long needle went into the very sore part of his back, he exploded. I was standing on the right side watching, and if it weren't for the stocks, I would have had to go to the hospital for a broken pelvis. He kicked the side of the stocks with his right hind HARD while simultaneously trying to rear and striking out at the tech holding the twitch with his front legs. His eyes got rolling and he managed to break part of the needle set up. He managed to give the vet one hell of a mare glare.

The vet had her tech draw another set of sedatives, and the lady holding the twitch was like, that is A LOT. Great. At that point, I kind of checked out. I was upset that he was so sore, I was worried he'd fall down and hurt himself trying to evade the injections or he'd rear and flip himself over in the stocks and break his back trying to get away, and I was worried that he'd throw a big enough fit that we couldn't go through with the other half of the injections. I had to step away from him and watch from the other side of the room, my energy wasn't good anymore.


She gave the second round of sedatives a few min to kick in while they got a new 8" long needle, before trying again, being as fast as possible since it hurt him so much. He was sedated to the point of his knees trying to buckle, but he still tried to kick with his left hind. It didn't get any further than cocked and a half inch off the ground, but he was trying. By this point, I wanted to cry, which sounds stupid but I love this horse and his pain was immense.

But all was well, the injections got where they needed to go, and all that was left was for him to do was wake up so he could go home. It took him about an hour and a half, and he spent a long time standing splay legged with his head down, so much so that his face swelled like a chipmunk. The vet sent him home with 7 days of muscle relaxers too since he was so sore. My barn owner of course loved that- he refuses to eat them and they don't dissolve well, so syringing them into his mouth was the only option and took a while to do.


We did get him home, and he was bright eyed and happy once he was there. He spent 3 days in his stall after that- one day of complete stall rest with no hand walking, then two days with hand walking and hand grazing because the round pen he was being turned out in was too wet. The vet said he could go out if it was dry, but we were getting an insane amount of rain at the time and she didn't want him out there even with a waterproof sheet on.

I did put him out in the round pen Thursday evening since it finally dried, but I put his lightweight sheet on to keep dust off his back if he rolled. He bounced around like crazy, feeling really good, and I'm so glad we have the round pen for stuff like this. He could get moving but then was turned instead of being able to get a head of steam up. It made for some great videos and frame grabs!

I was allowed to ride him Friday, but I opted not to since there's no hurry. He spent Friday in the round pen since it was nice and I walked/trotted lightly on Saturday after doing barn work, in prep for him getting a little more exercise before going back out into the big field. We mostly walked, and he felt really good and even. He wanted to lay on my hands, but that's ok. He felt even and I was really happy.


Since he got his injections, there have been a ton of ups and downs, and I have swung from depression over him not coming back to work and not being able to do this job, to excitement over how great he feels and he's going to be perfectly fine. It has made writing about him really hard and I'm emotionally wrecked from the highs and lows. Some days he feels great, some days he feels like shit. The vet boards with us, she watched me ride him after one particularly bad moving day, and thought he looked sound but weak (he felt a thousand times better when she saw him two days after the really bad ride). We're back to his full work load, but I'm keeping the hard stuff to a minimum because he doesn't feel completely comfortable while warming up (he seems to need a few laps to get comfortable). Instead, I'm opting for gentle hill walks after light rides to build the muscles to hold that area in place.

Most of our show and lesson plans have been canceled. I was finally able to go to one this week, and I'll see GP Trainer this weekend. The one I went to this past Monday was awesome, and I got some great information in a bunch of areas (in hand and flying changes). 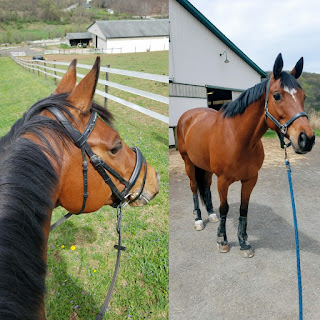 Everything I had planned for this year is on stand by as we get him rolling again. We'll see what happens!
Posted by Codex Dressage at 11:35 AM