I opted to use Liam's farrier for Eli as well. He's not as experienced a farrier as some (he got into shoeing post-army), but he's very into continuing education, corrective shoeing, and forging. He's very into showing owners where imbalances are, the good and the bad, and can read hoof xrays and work with a vet to solve issues. He has developed his eye and takes his time to make sure corrections are right. He also happens to own the farm I board at, which is also good!


They're super rough and I cringe looking at them. The angles on all 4 of his feet are different. On his hinds, the medial aspects have shorter walls than the lateral aspects.

I REALLY loved riding Eli when I tried him out, which made me want to overlook his feet (and after all this shopping, I would have bought Penn all over again too knowing what I do now). I absolutely xrayed the shit out of those fronts (hoof to fetlock, all the angles) to make sure the insides were ok. The insides are pretty good for being toed in. The hoof wall, albeit very poor quality, is very thick. There's a ton of excess toe. He has a neutral palmer angle and very thin soles. The bony structures seem ok, joint spaces clean, and no side bone. The vet who did the PPE thought he went through a period of very poor farrier care based on the hoof wall and excess toe.

Multiple vets looked at his xrays and thought since he's sound now, these feet are entirely fixable.

We already overhauled his diet to a 19% NSC feed, but I'm working with BO to put him on a 13% NSC beet pulp based feed since he seems particularly sensitive to environmental changes. His original feed did not have controlled sugars and starches, and was much higher NSC than what we switched him to. I'm also giving him 40mg of biotin and 400mg of keratin twice a day. Human pills worked on Penn, (I take one a day too, my hair stopped falling out and my nails stopped breaking), so I'm hoping it'll work on Eli too.


Anyway, back to his feet. Farrier thought there was enough hoof wall to get nails in, which would allow him to put pour pads in.

His goal, realistically over the next year, is to keep bringing the toes back while (fingers crossed) good quality hoof grows out, ideally bringing some more heel with it. He's encouraging the sole to be concave instead of flat. He's also trying to coax the hinds to grow bigger.

Eli's breeder said he was good for the farrier... and well, he was... not great. Still manageable, but threw head tossing tantrums and ripped his feet out of Farrier's hands. I think his feet hurt somewhat, and standing barefoot on concrete was a bit too much for him. He was also itching for Julius, had a few days off beforehand, and was testing us a bit. 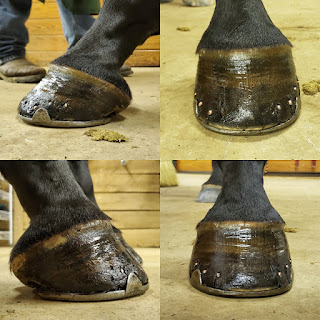 Farrier got his fronts trimmed and reset, and the hinds trimmed before calling it a day. Eli was so over it. We reconvened the next day for hind shoes to go on, which went quite quickly because Eli was quiet and behaved himself.

Eli wants to land toe first, and his front end can be quite stabby. The leg will reach from the shoulder, and the reach stops at the knee and he jams it back down. He also paddled quite a bit up front. He's built nicer than he moves. Just one round of shoeing mitigated a lot of that and he's already moving better under saddle.

The corrections Farrier made behind have Eli struggling a bit. He wants to land on the outside of his hoof and the trims are now encouraging him to land in the middle, so he has to learn to move again. Every so often he takes a misstep behind where he catches the toe or loses the stifle. I'm just taking everything super slow and easy with him and I'm being super careful not to overdo any of the work we do. His musculature has to change, which will take time.

There's a ton of training issues in that video that need to be addressed, but I'm super pleased with his progress. My big concern was to keep him forward thinking with no curling. Above the bit was a ok. I want to start to develop some thrust, so he'll develop push, so he'll find real connection and come up off his forehand. He thinks that's a bit silly and would rather root the reins out of my hand or lean... because guess what? I put him back in a snaffle! I used a GP Trainer trick to help him not find purchase on my hands, and a Mary Wanless trick to keep me out of his mantrap (the hole at his whithers), and keep his rooting from dragging me forward.


As I said above, Farrier is very into continuing education. As such, he participates in "Farrier Fridays" where more experienced farriers meet with newer ones and with vets, and they tackle a topic or two. One of the events they're doing in a few weekends is a weekend long clinic with British Master Farriers (sorry, can't remember any of the group names) and local vets, at our barn. Farrier asked if they could use Eli as a demo horse. Eli will have a ton of farrier eyes analyze his movement, conformation, and hooves. If the farriers want, the vets will take xrays (free of charge to me), and the group will discuss. They'll make a plan, and do the first shoeing cycle of that plan (also free-ish of charge, I'll probably have to pay for materials, which is cool). So duh, I said yes. Eli is a solid guy, a crowd won't bother him, and he's got some issues that I'm thrilled to have those eyes on! Best part is, Farrier will be very involved in the case and will easily continue after the clinic!
Posted by Codex Dressage at 4:00 AM