My sister-in-law got married on Saturday, so Mikey and I last worked at my lesson last Monday, and last rode on Tuesday when I took one of the barn kids down to the creek. Mikey earned his trail blazer award that night. The trail down to the creek had a bunch of trees down and we cleared some brush and branches out of the way and ducked under trees etc. He was a patient horse while I cleared stuff and a champ walking through the random crap on the ground.

So I went out today after I got home from our trip, and tried on Mikey's new Don't Shoot Me fly bonnet. Here are the results.

Yes, my horse "sings" on command. The ear net fits him really well, and it's made of good solid materials. I wish I could buy this net in a different color for use in public! The ears fit perfectly.

I got him all dressed in his dressage finery with the wrong shaped orange pad. That's one of my pet peeves, using an all purpose pad with a dressage saddle. I swear, I don't do it often. In fact, I've only done it when I don't have a dressage pad. Except now. This orange stuff is new and fun, and it's fun for now wearing bright orange.

So we tried to have a nice pic, and then what Mikey really thinks. 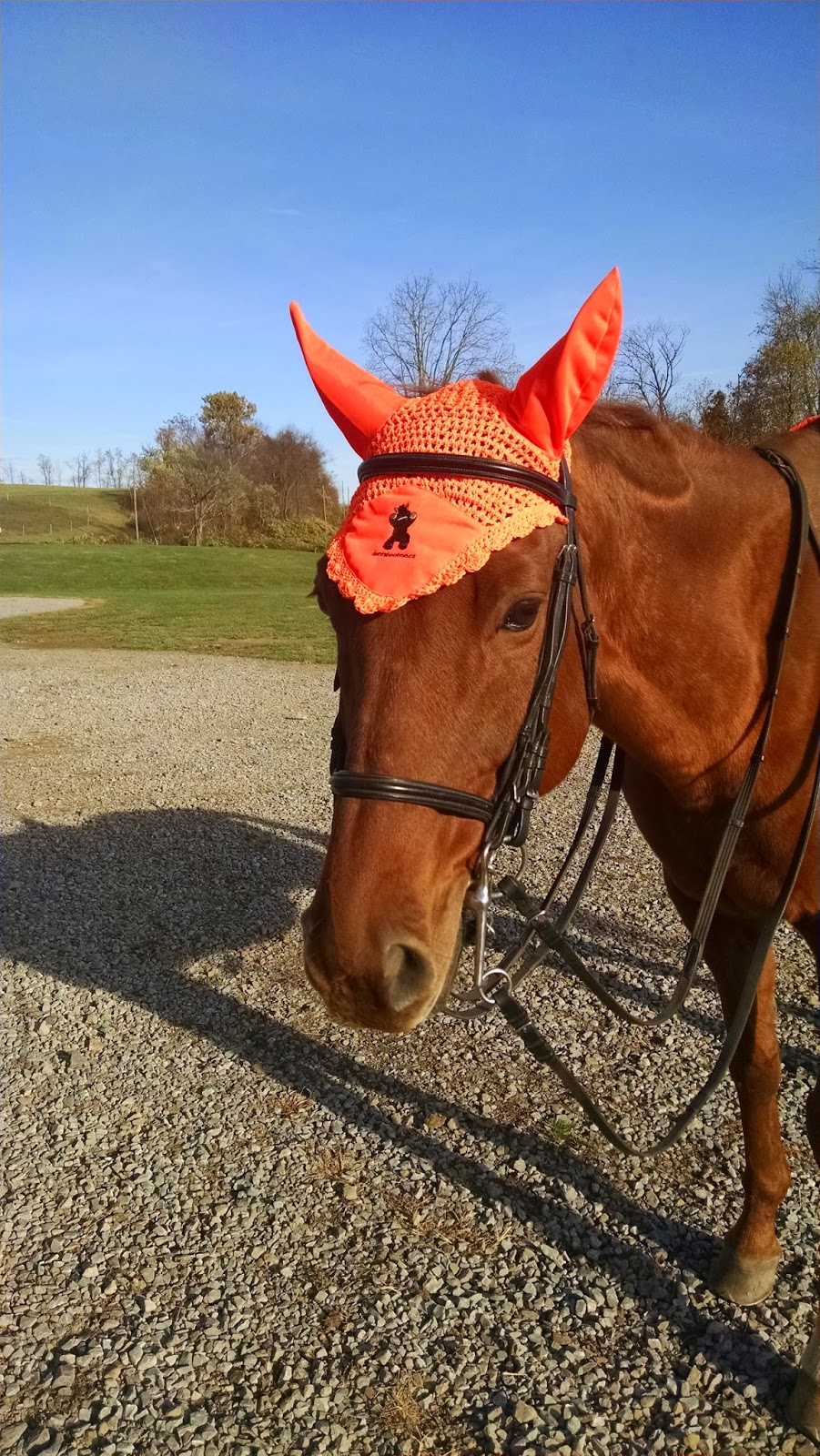 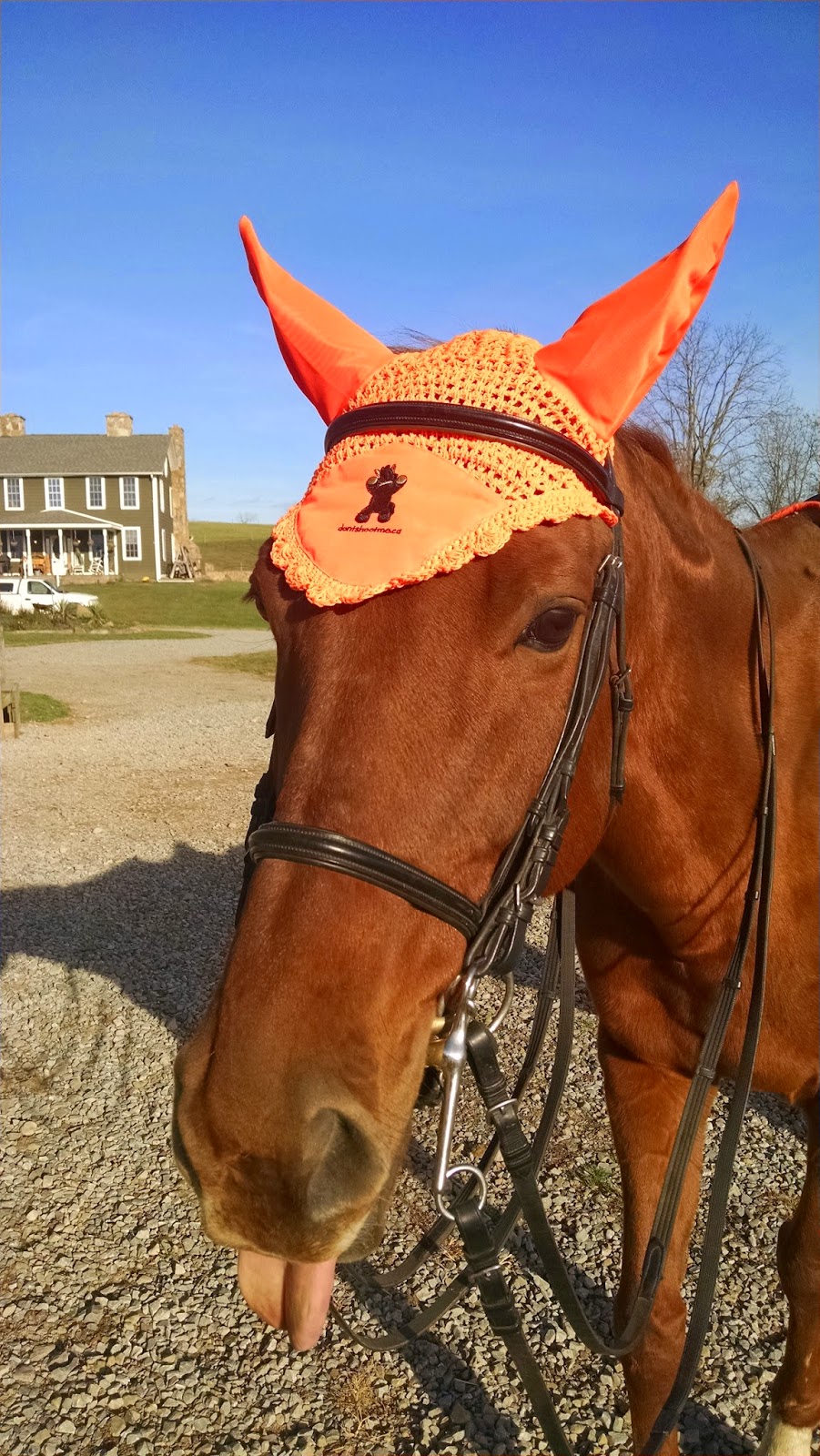 He was absolutely wonderful today on our ride. My trainer has her full size dressage arena out (it came out a couple weekends ago for a clinic), which is fabulous because I actually have walls to work in instead of our baseball field. I opted to work today because Mikey is usually best for me when he's off for 3-5 days. He might be a bit stiffer, but he's much more lively. I've gotten away from the gallop sets, I need to get back to them. They were good for both of us!

Anyway, we started with what we worked on with my trainer at the start of our last lesson- fixing the shoulder in. I paid attention to not overdoing it while keeping the bend, and softening myself so Mikey could soften. We're starting to get very precise changes to shoulder in and back to straight before the corner- as long as I don't ride him into the corner and as long as I ride softly and from my seat.

After both directions were good, we moved on to what we worked on with the German Riding Master- using lateral movements to help collection, and pirouettes in trot and canter to get the engagement and activity. Mikey was nice and sharp today. He developed his nice strong super through and light in the hand trot very quickly. I'm trying to teach him a differentiation between what it means when I apply both legs at the girth (extend his step) and both behind the girth (collect the step). I'm also applying the extra pressure in the walk and trot at the girth as each front leg goes forward to get a little extra zazz from that leg as it goes forward- and it's working! He's catching on very quickly and is even starting to develop a Spanish Walk and an extended trot with more "grandeur" as one of my judges requested. Back to my point, he understands the leg placements very well and is beginning to shorten and lengthen just by my leg placement. It lets me use my seat in a much more supportive manner and let's me help him instead of fight him. We did a couple half circle canter pirouettes, nothing very exact, and I finally got that sitting hind end, raised front end feeling. Yes, I've done them before, but it finally clicked that that is the feeling I need to develop somehow and then carry on with. I used the canter pirouette to develop the feeling, just as simple as half halts, raising my shoulders, a little more outside aids to help the sideways, leaving the door open for circling, and he'd promptly sit and raise his front end. I'd release him from the sideways and send him straight and paid extra attention to maintaining the feeling. He can't maintain it that long, but we have a good start and he has lots of try. We'll build the muscles up this winter.

That work went so well I quit while I was ahead and we moved on the the flying changes I worked on with my trainer in my last lesson. She had worked with me to ride them much more forward and much more through and straight. It took a while for us to get out of the very collected work and into the forward through strides I needed. Once I stopped micromanaging him, aside from holding him straight from my seat and thigh, he offered up changes quickly and cleanly. I'm still using the pole on the ground, and asking for the change a stride before it and instead of using the pole the change, he's changing right when I ask! We'll start taking the pole away as soon as I work myself out and can be consistent for Mikey.

We worked on a lot, but we were only at it for a half hour to forty min. He was great, so I took some after riding pictures:


One thing I'm also happy about is I'm getting better at using the double reins. I hold the bradoon rein under my ring finger, and my curb rein under my middle finger. I've finally gotten comfortable working my ring fingers and middle fingers separately. Mikey gets the relaxed curb rein he needs when he's soft, and I keep the contact on the bradoon but can still work the curb rein.

Anyway, all this good news must be the work of the magic orange net!

Anyway, it's very late on a Sunday night and I have to get to bed so I can get up for work in the morning!
Posted by Codex Dressage at 12:08 AM