The Importance of "Freely Forward"... or even just forward!

Not a whole lot going on. The weather is finally breaking and I'll be able to ride almost every day before Mikey moves to his new barn.

I went to visit my friend that owns Mikey's new barn on Tuesday, and saw her ride her horse (swedish warmblood) and I got to have a sit on him. He's a neat horse and a very, very safe horse. He's never going to be naughty in a way that makes his rider nervous, and he's in general lazy. He's going to make you work for every step.

He also is a horse that never had a forward button installed. He knows how to canter pirouette and piaffe and is offended by your seat. I used my seat to ask for shoulder-in in walk which was fine, but I asked for it in trot and he piaffed away. To the point where I couldn't get him to stop. No rein contact, leg on, clucking, kicking, whip, he just piaffed more. I quickly found that when you don't hold him together (aka hold his face) and try to ride him properly from your seat and leg he becomes quite offended and quits on you by either piaffing (if you're in walk or trot) or starting canter pirouettes. It's not his mother's fault he needs held together, she said his old owner put him in a double to help get the frame and tuck his nose in. Basically fake it til you make it.

He and I went at it for a little while, meaning I skipped to canter to get more forward and as soon as I added leg and seat to push him to continue cantering when he tried to quit he switched to cantering in place and hopping back and forth. I eventually settled on the thinking, "Fine, if you don't want to go forward my way, you'll slow down/go backwards my way." It only took 3 cycles of this, where he would quit cantering for one reason or another (I kept little to no contact on his face so he had no excuses, and I kept my seat almost electric to keep the forward- Mikey would have been in the next county), and as soon as he'd break or hop or anything, I'd force him to stop all motion immediately and back up. This is not my favorite method because naughty horses tend to think about rearing or doing something else naughty, but he was none too pleased at my insistence. Three back ups later, I had a very through, connected, round horse who continued to canter until I said otherwise.

I tried to go back to a little shoulder-in in trot so his mom could understand how to ride it better by watching how I asked, but we went back to that same piaffe stuff. I ended up taking a very light steady contact, the same as I would on a green thoroughbred who just needed to practice searching for the bit and accepting the light contact, and then electric-seating him until I got my forward. He's not very quick to make the change to piaffe, so any time he'd think about switching, I'd take my outside rein and pull his nose towards the arena wall to break his thought process. He'd change from evading to saving himself from running into the kickboards and then end up going forward like I wanted him to (he was in no danger of hitting the walls or scraping his face on them, I promise. I'm not a sadist.). I maintained that forward to the bit feeling, and about 5-10 min later of constant support he finally switched from halfway connected to fully connected and light in my hand.

As soon as he softened a little, I would soften a little. He softened all the way, he got rewarded with posting trot. He lost connection, back to sit trot. We did a little more of this, then I gave him back to his mom.

She got on him and said "Wow! His back is up!" and then I coached her to getting that same forward trot (she stuck out the sitting trot like a champ!), on the soft rein (she's good at light contact- she never liked holding him together as it was not correct), and through. I had her focus for forward and straight. Keeping herself straight, him straight (we sacrificed bend, but once he has forward back consistently it'll be fine), and her hands on both sides of the neck and when she used one to use it from the elbow with the soft wrist. Once she got him through and soft, she practiced switching between posting and sitting trot following the same rule I set. I then had her change directions on the diagonal, and if he broke the connection at all, 20m circle back around and try again, coming out of the corner forward and straight. I told her don't give him an inch, because he's not going to give you an inch! He has to give first. She was fabulous! I also told her I wouldn't work on anything lateral until he answers the forward question off the seat. You have to be able to get out of the lateral movement promptly if he shuts down, and right now you'd end up in piaffe.

Afterward she said she had stopped working him from the seat because it had pissed him off so badly, and that I'm not the first one to say "more forward!" The big wig trainer that her trainer goes to see and another not quite local trainer had also said that she needs to find more forward, and you can never go wrong with more forward. Her boy just needs a week's worth of very forward, no nonsense rides and he'll be done with the shut down stuff. He's not bad, he just knows what he can get away with! She said she likes consistent lessons and supervised work, so she'll see her trainer once a week and then I'll teach her two lessons a week while I'm there. We're very excited for a good working winter!


And I am totally stoked that I got to ride a piaffe, even if I didn't mean to! He's a super neat horse that likes doing the dressage "tricks" and after we get this forward thing worked out, I'm going to ride him a few times to practice flying changes simply because if I am even halfway right he'll give me the change. That way I get confident and quiet about them, and I can take that back to Mikey.

But here is my little sickly cat in our front yard with his scarecrow army: 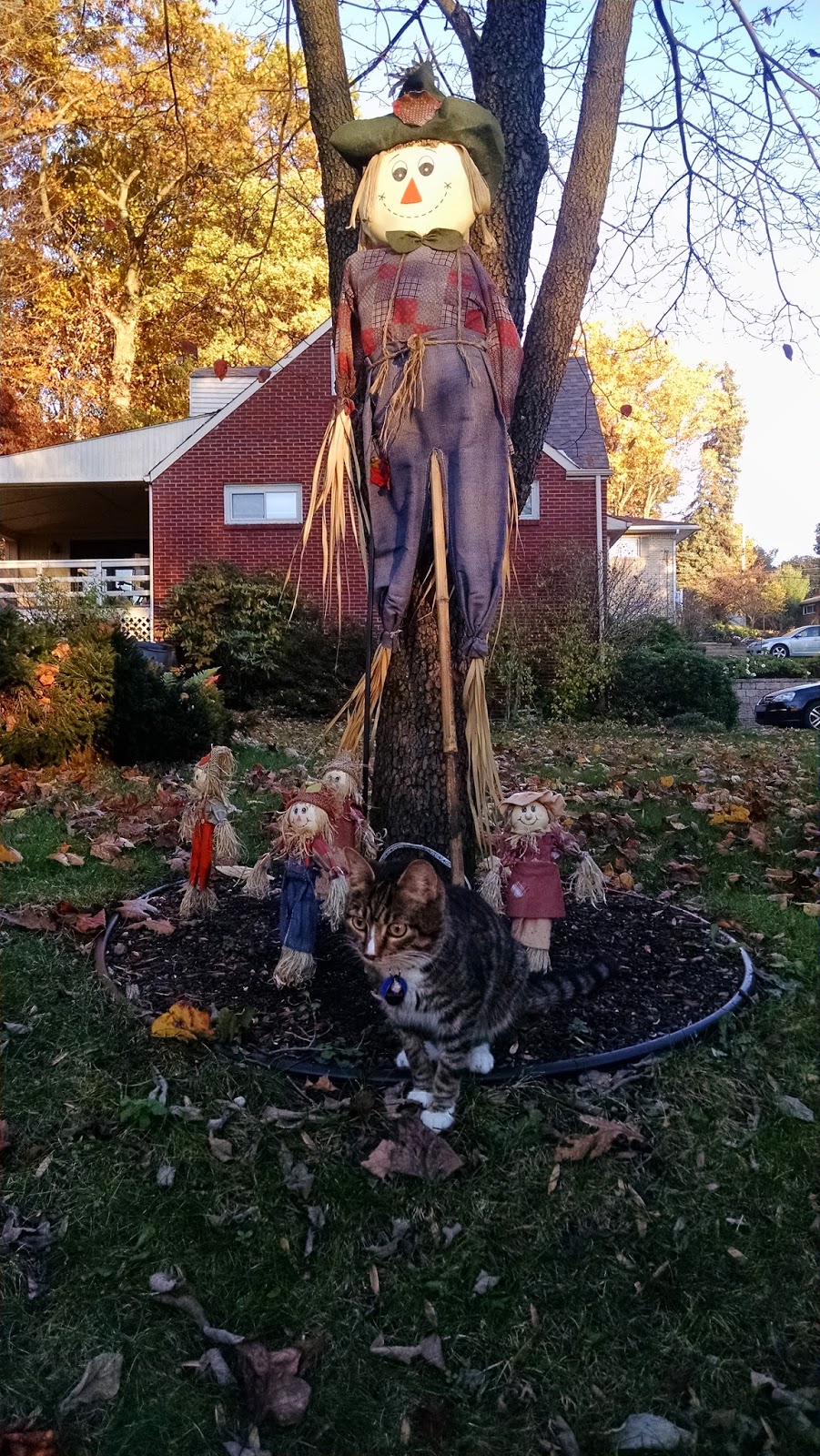