I saw this the other day on Facebook... and I just loved it so I saved it to my phone to share here for a laugh. 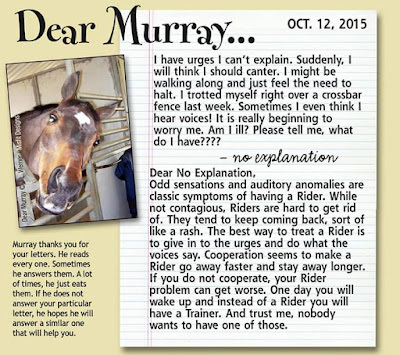 I took the two saddles back to the tack shop Tuesday. I had called in the morning and asked them to order me a Stubben 1894, 18" seat and B tree (which is actually their 29cm medium tree, who knew?). When I got there in the evening, I got the news of what was going on. I'll have 4 options:
Basically, I have a crap ton of options still, and they're all options that the tack shop offered me- I didn't have to ask! I love my tack shop. (I am also going to get my BOT quartersheet from them.)

I think I'm going to go with option 4 at the end of the day, only because I'm nervous about how wide his back will get. I know the B and C trees are both mediums, but the C is a wider medium, and the baby horse will continue to grow his back.

It's funny how saddles end up fitting. And how size really means nothing across the brands. The wide saddles I tried were too wide yet pinchy, and my MW Jaguar sits well over his back yet squeezes the bejeezus out of his shoulders. Then the Stubben is put together just the right way so it fits his back, but flares out enough to fit his shoulder too. Goes to show that at the end of the day, you probably just need to haul your horse to the tack shop and set every saddle they have on his back until one fits. By the way, I asked if there was somewhere close where I could do that if it came down to it. She said no, they've had people come to try western stuff and they just park the horse on a side road, but she didn't want to do that with baby horse, haha.

For now, I'm borrowing Trainer's Bates Isabella, because it somehow always fits every horse in the barn (without being an adjustable tree). Plus her CWD dressage saddle is finally here!

Half of my Dressage Sport Boot order arrived Tuesday! I ordered 2 full sets because I'm crazy and couldn't pick just one. The second set was on backorder (but now it's on it's way!), but the first set is here! 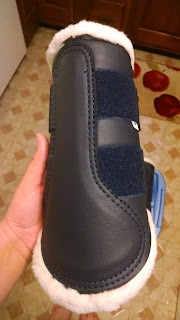 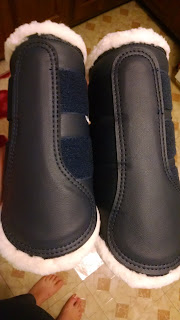 Navy!!!! I couldn't not get them after several people said they were awesome. And they work with my current color scheme- everything is either black or white or navy.

(And yes, that's my horrible vinyl square kitchen floor. Our house needs to be updated.)

I was able to use them last night, and the mediums up front, larges behind work so well for Penn.

I was also extra pleased about the boot quality. My DSBs that are currently shredding (they've been demoted to trail riding or ultra sloppy arena riding), had a more thin synthetic/plastic feel, where these boots have a nice tough leather feel. It also appears they have some extra padding/reinforcement on the inside of the boot. Only time will tell if they hold up to Penn's interference!

I showed them to trainer (who abuses her couple sets of DSBs in a fierce way), and she was impressed with the quality, and then the sale price, and couldn't stop staring at the navy. My trainer, who is ultra color conservative (ie black, gray), was really loving the navy. She also loved the 3 straps on the larges. She has trouble with hers over stretching and then not holding. I believe she's ordering a full set of navy larges in the next couple days for Cody! I bet she'll order a couple more pairs too in smaller sizes for the rest of her horses (probably in the brown and white).

So the only other thing to note is that I used a Mom down at the arena to take some video of Penn on my phone. I don't have much media of him working because I can't seem to drag husband out to take pictures or video, and I end up riding alone a lot of the time. FYI, that's why you're all plagued with a TON of standing awkwardly in the barn aisle, standing out outside, or standing in the stall pictures. She was happy to, so now I give you all some fresh video of my baby horse! (who is looking less and less like a baby!)

I used YouTube's "Glamour" option as a filter... because it was hard to see him when he was so far back and against the trees. My video editing software wasn't working well (it was making the video choppy) so I opted for the YouTube edit instead.

Anyway, I need to:


Things I am pleased about:
I can't wait until he's ready to collect more, and then extend more. I think he's going to have awesome extensions! He's so loose and flexible in all his joints, I think he'll have really super reach. I also think I'll be battling that incorrect toe flick/toe hyper-extension because he's so loose and flexible in his joints. Thoughts on avoiding that?
Posted by Codex Dressage at 12:30 PM