So aside from rearing woes, here's what's been happening:

Not a lot of riding last weekend because Husband and I partook in a Clue Road Rally on Saturday, and then I went to Autocross with him on Sunday. Where I got to see this, up close and in person.

I did sneak away Sunday in the morning to go on my weekend trail ride date.

After arriving at Autocross, I realized that I was about 2 miles from the local Dover Saddlery store! I don't usually go there because a) it's more expensive than the local tack shop, b) I have to take toll roads to get there, c) it takes me over an hour to get there. I asked Husband if I could sneak away and go to the store before it closed and before the Autocross picnic. He said sure! So off I went. I ended up ordering a saddle, which arrived yesterday, but that's for another post. Mostly because the pictures of it are on my phone and I don't have any data left for the month (resets on Sunday) to upload them without Wifi (these pictures were pre-uploaded on Monday this week).

I took some pictures of my Jaguar just sitting on Penn's back last week. This saddle was too wide on him when I brought him home. It's a MW. It is now too narrow for him. He's grown a tree size in a month. Eek. 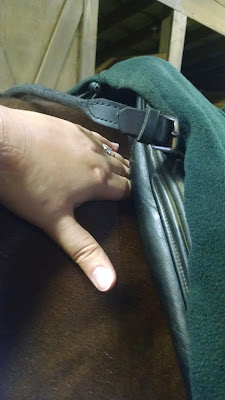 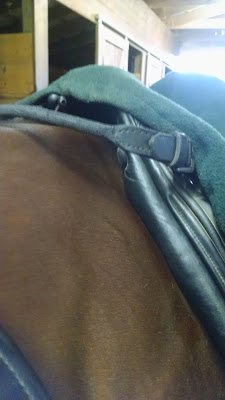 The picture that has my hand in it? So I tried to run my hand under the front panel (before girthing it up). Well no shit the horse is getting girthy and nasty about tacking up, because my hand CAN'T slide under the panel. AT ALL.

I rode late one evening last week. Penn walked through the cavalettis you see in the below pic (I was told not to trot him through cavalettis for a while), then I made him walk over the cross rail. He was like, "Ok Momma! But I have to lift my feet awfully high over this one!"

I also started rereading Harry Potter. I was reading the part where Harry reads his school supply list and got to the pet section that lists 'students can bring an owl, cat or toad', when Penny jumped on my lap and wanted a snuggle. So I'm going to assume Hogwarts is real, Penny knows it, and she is going to come with me when I finally get my letter. Well not really because I'm quite a bit older than 11. Sigh.

Posted by Codex Dressage at 2:41 PM