The end of my vacation was highlighted by a schooling show!

I didn't go alone to this show- Trainer and 3 other students brought horses. I think I was the only one who braided (which is complete overkill for this show- people were showing in brightly colored sweatshirts, non light colored breeches, and maybe 2-3 people wore coats). I also had extra time Sunday morning and I'm teaching Penn's mane to go to the right, so I figured I'd take any chance I can get to tie it up on the right side of his neck. I can also braid his mane in about 25 min and take them out in about 5 min due to the obscene amount of braiding practice I got working for Trainer in the summer/fall.

I dropped the ball and didn't take any pictures with my phone from the prep phases. What the hell!

You know how I decided that Penn was going to get over his clipper phobia asap? You know how you school at home with all kinds of distractions because anything can happen at a horse show? My first test is why we do all that prep at home. The barn that hosts the show is a large hunter jumper barn and just because they're holding a show doesn't mean the barn stops it's regular activities. Boarders find other rings to ride in, lessons are taught, and the staff keeps working like a normal day. This past Sunday included clipping horses.

A little background info about the host barn: It is a HUGE 75,000+ square foot facility with two indoor rings, 200 stalls, 3 outdoor rings and a polo field. The whole indoor arena/warm up arena/boarder stalls/show stalls/lounge/everything you could ever want in a barn is under a massive steel truss building (you know, the ones with the huge steel arches that stick out into the arena). There are two indoors- the main one that we show in, and a smaller (yet still large enough to hold a 20x60m ring) warm up arena. Boarder stalls and an aisle run down both longsides of the main indoor arena (cross section: building wall, stalls, aisle, wall, show ring, wall, aisle, stalls, building wall). The aisles and stalls have a ceiling, and the hay is kept above. They hay the horses by dropping flakes from the loft. The warm up ring is a large sectioned off part of the building that has, what I assume are, temporary stalls set up in a permanent manner. I can't believe they take down over 100 stalls after every show- not when they host a show or two every month. The show stabling and warm up ring mirrors the set up of the main indoor and boarder stabling, minus the loft (cross section: building wall, stalls, aisle, stalls, warm up, stalls, aisle, stalls, building wall). The sawdust pile is on the warm up ring side of the wall that separates the warm up from the main ring. It's a pretty neat place.

How is all this relevant? Well, normal barn functions on Sunday included running clippers on the other side of the show ring wall next to the letter F. Remember when I turned on the clippers at home and Penn left the barn? I am super glad I made him get over his clipper phobia. He heard those suckers click on right when I started my first test and was like, "Holy shit, it's the clippers!!!" but I was able to tell him to stuff it for the most part and have a semi-good test. 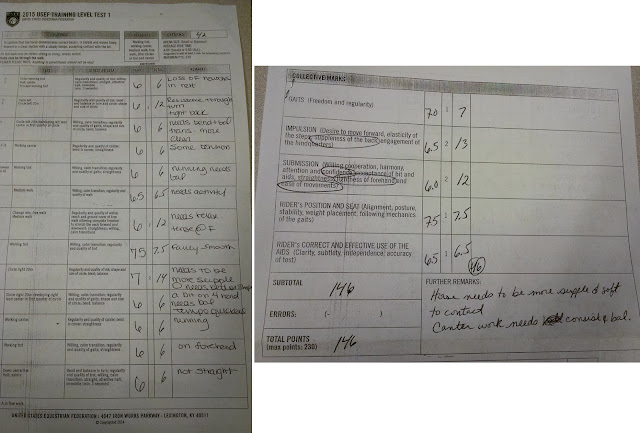 For a 63.478%. I tied with one of the other riders in my group, but I had better collectives than she did, so I won! It was a big class too, 12 riders, including my trainer! She was riding one of her new sensitive baby horses (she was 3rd, wahoo, top three for us!) 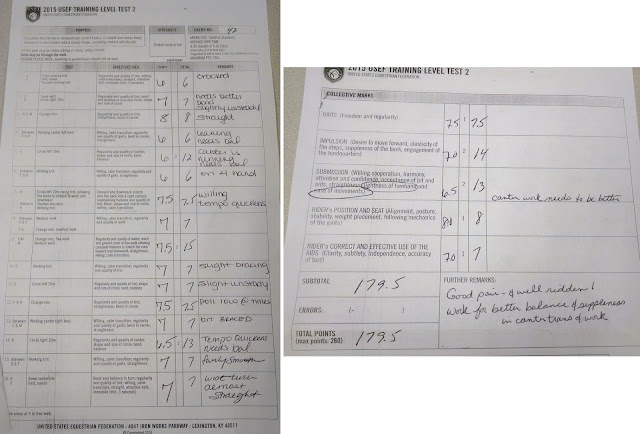 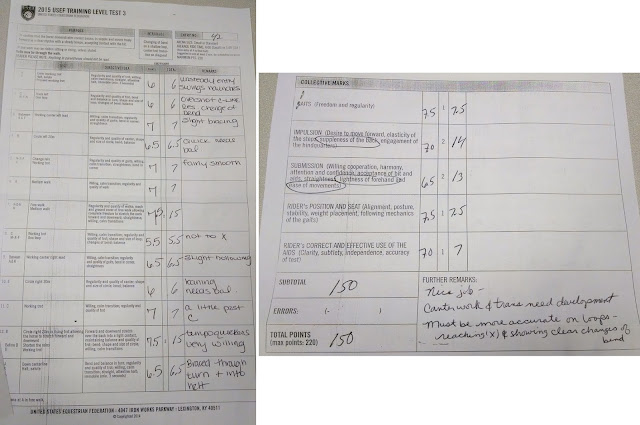 For a 68.182%. I won by 3.9%. It was a smaller class, just 7 riders. I botched the last canter to trot... I never prepped him for a downward transition and blew past C. Also, shallow loops in a wider than 20m,  small sized dressage arena? Not cool.

Training 2 and 3 were very nice to ride. Penn was very attentive to me, and rideable through the moments where he was a bit spooky. He let me have a good think about each movement and I was able to properly implement my plan in most of them. I never felt like the tests were just zipping by, like I was being rushed to finish them. In all our years together, I achieved this feeling with Mikey twice. It was back in 2014 when I got my Second level scores. Everything simply fell together and we were in harmony. I didn't have to actively fix anything, just remind, so I could actively think about my plan on how to ride each movement to it's fullest. Training 2 and 3 on Sunday were that way with Penn. He let me ride the plan. That's no dig at Mikey- dressage was tough for him. Penn's talent for it is a constant reminder of how hard Mikey worked for me.

The too wide ring was made abundantly clear to me and Trainer in Training 3's one loop in trot. We're already riding in a small dressage ring, and to top it off, it's 14ft wider than it should be (I looked it up- it's 80' wide... compared to 66'=20m). That means if you ride a proper shallow loop, you're not going to make it to X. If you ride the arena instead of the proper loop, you're so angular that the movement looks wrong and rides terribly. Ack. Of course that messes up the circles as well. Ride a true 20m circle, or ride the arena and make sure you hit the 4 points of your circle as laid out by your letters? Beggars can't be choosers though- this farm hosts a 6 show winter dressage series that lets you ride 3 classes and have an overnight stall for only $90. Can't beat that. The local-to-me series is $100 for two classes and a day stall.

Trainer had no real complaints for me - just that Penn needs more strength and time is what's going to build that. She also said he needs 2.5 tests - he's distracted a bit in the first but gets better as he goes, is great for the second, and gets tired by the third.

All in all, my barn had a great day. They don't divide the classes into Open and AA/Jr at this show series, everyone who is riding gets lumped together by test. One of our riders won Intro A, was 2nd in Intro B. I won all of Training Level (and had the high score of the day, but boo, there's no ribbon for that!). One of the other riders was 3rd in BN B and 2nd in Training 1. Trainer was 3rd in Training 1 and 3, 2nd in Training 2. Another of our riders was 1st in Novice B and Training A, and 2nd in Novice A. We did no worse than 3rd in any class! Not too shabby for 13 tests in a wait-listed show!

Posted by Codex Dressage at 5:08 PM