5/8 Schooling Show: The Awesome & The Bad


It was a longer day than it should have been- I went a two hours early so I could help a friend. She events and knew her event tests, but was riding a second horse and riding dressage tests with him... and she was having trouble keeping track of 4 tests in her head, so I came and read for her in exchange for the use of her show vest. I'm still trying to find my own!


There was a lot of time to hang out and chill.


Warm up was a good one. He was taking some funny steps that I attributed to a small scratch he had on his front left coronet band. The steps got more solid as he warmed up on what turned out to be a really shitty surface. The whole ring could have used another drag. I'm not one to complain about surfaces, because our old outdoor was a clay/sand mixture that got very hard when it was dry and very slick when wet.


This surface was just not good. It was deep and had a crust. I could feel Penn tripping and muddling through other horse's footprints. It really needed a drag. His steps eventually evened out, so I thought he was ok.


The sun was causing havoc with Husband's camera- the clouds kept rolling in and out and so his camera was constantly adjusting so the pictures were quite varied in exposure!


You'd think with all that gorgeous weather we'd be riding outside? Nope. Back to the spooky indoor!


I got the bright idea to have husband stand right at A! The standard arena takes up most of the space in the indoor, so I asked him to plant himself right on the wall looking straight down centerline, so I can see what the judge saw. Husband was too funny- when we were done, he was like, "Every time you turned down centerline you were slightly to the left." How right he was! His first well spotted error- now to make him attend all my lessons so he can learn so he'll see other errors and yell at me...

Anyway, I liked this test very much. I did the first leg yield and was like "BAM! That felt good." Then I came back up again and saw the hoofprints I left and was like, "Wow, that last one was very steady in steepness and forward. The line is basically straight to the letter."

My lengthenings were definitely conservative- I was afraid of mucking them up so I didn't ask for much. Penn was not interested in delivering his usual 7-7.5 free walk or stretchy trot.

We ended with what I thought was a 68.906%. I got the test back, was happy, and reviewed it in the truck on the way home and thought, "There's an awful lot of 7, 7.5, and 8's in here. How did that not balance out the one 6 and four 6.5's?" Well, the show manager who normally totals the score broke her right arm (she's right handed) and that made it impossible for her to tabulate scores. A different person did it, and didn't add the 8 for the final salute into the score... even though she wrote the test movement tally below it. She didn't even write in the 8 for the total column.

I added it all up myself, many many times, and we actually got a 71.406%!! That's my first time being in the 70s! I've been sub-30 at events (recognized and schooling), but that's not the dressage world. I was so excited! I don't know what place I got since they calculated wrong (and I found it on the way home)- they may have just missed it on mine, or missed it altogether on everyone's tests. I know first was a 72%, second was 70%, so who knows. Either way, it was a super competitive day and everyone brought their A-game. At least half of the riders were doing what I was doing- one last prep for the recognized show on May 21-22. I do think this judge was a bit generous.

We got a 3rd, and I'm inclined to believe that the scorer missed the last score on everyone's, so we're going to stick with that! 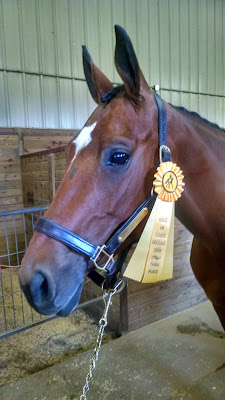 Well you all know I don't do just one test... and I'm sure you noticed the not good steps Penn took in the first test, mostly when he had to turn with his left front on the inside. He had a little rest between tests and I knew something wasn't right when I went down centerline for 1-3. I didn't warm him up again since he doesn't do well with a second warm up and this is a schooling show, so we did a trot around the outside of the ring and up centerline. We made it through a handful of movements before the couple of steps became consistent instead of going away and I pulled up and excused myself from the test. I went back through the video, and what was screaming to me, wasn't overly apparent, but it was enough. No one watching seemed to know why I pulled up. Whatever!

We think he's brewing an abscess. I couldn't get one of the barn farriers out Sunday night to hoof test him, but I talked to one on the phone and she said to poultice it and see what happens. There's zero heat in his legs.

I jogged him on the gravel driveway and he was ever so slightly off. Barely a head nod, mostly just extra wavy shoulders as he hit harder on the right front than the left.


Husband thought it was going to be a quick drop off... but I needed to unload the trailer and Penn needed to have his braids taken out, get his Adequan injection, and get his hoof wrapped (which also meant I had to root through the trailer looking for the abscess stuff).


I tried to involve him in the hoof wrapping. I asked him to hold the tape (among other items).


BTW, Penn hates vet wrap. I don't think anyone has ever put it on him because he totally lost his shit when I started wrapping the foot after poultice and the diaper. The sound of it unwrapping freaks him out.

Next Post: The vet comes Monday morning to do chiro work on Penn and check his hoof.
Posted by Codex Dressage at 7:00 AM