K got started on him before I got to the barn (boo work! Why couldn't I leave early to watch my horse get a massage?). When I walked in, Penn had this sleepy, droopy lip face on and was SO RELAXED. Kind of like a high AF kid that said, "Heeeeeey Mommm... I feel gooooooooooood." Lots of lick and chew.

I should have snapped a pic of his face, but I didn't want to be that crazy person taking pics of everything... but I should have because K loved Penn and took a bunch of pics of him, haha!

She found a ton of tension in the SI joint area. Enough that she asked if a chiro was going to see him soon because she was concerned about it (I assured her that he's on the schedule to get an adjustment on Monday). She found more tension in the right hind area and left neck (go figure, that dang diagonal pair thing again).

She'd find a tense spot (Penn disliked this search very much), but then she'd push into him and hold it on certain points and he'd be tense for a moment then all of a sudden get super droopy, ears cocked, eyes closed, hanging lower lip and he'd enter a trance for a while. I think my description of how she finds bad spots and works them was quite poor, so forgive me because I don't quite get how to find the spots... I look for knots in my own back and bear down on them, but that's not what she was doing.

She asked to see him walk and trot, so we lunged a little bit and agreed he wasn't quite comfortable behind yet.

She worked a couple more muscles, then put some patches over the SI area and underneath him. 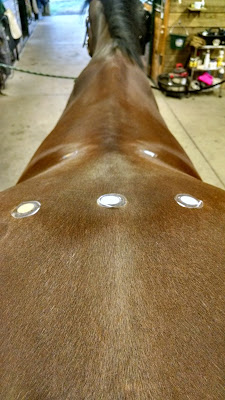 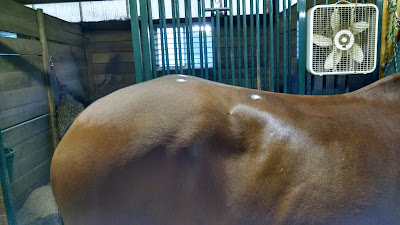 I took a ton of pics of where they went to I can reapply later. The center patch is a stronger Aeon patch even though it looks like the normal white patches. I bought a second Aeon patch and I'm holding on to it for the May 21/22 recognized show to put on him after Saturday's test. I wasn't thinking properly, I should have bought the three sets of regular patches too. I'm debating just ordering the patches myself, and sticking them on myself... I know Penn's problem spots and how both K and my usual patch lady determined where to apply them. For the cost of one visit of my patch lady, I can get two visits worth of patches from the manufacturer. I hate doing that to her, but Penn is starting to cost me a small fortune! This way Penn can get patches overnight at shows too for much cheaper than if I bought another set of patches to apply myself from my patch lady.

The farrier came shortly after K left and fixed his shoe. He was just as stumped as I was at how Penn sprung the shoe, but instead of one side coming off the hoof, it curved more so the heel of the shoe wasn't supporting his heel or the hoof wall anymore- it was creeping to the soft inside of the hoof. Either way, he came out asap and fixed it.

By this point, Penn was a totally obnoxious beast and was obviously feeling pretty darn good. He wanted to rub his nose all over the farrier and lip his hair and in general be super touchy feely with everyone in sight. He eventually got bopped for being an obnoxious prick, then he looked all sad for 3 seconds before going right back at it.


I tacked him up and had a super ride on him- also very short because it was almost 8pm by the time I got on him and I did want to go home eventually that night.

I could tell an immediate difference in him when I walked off from the mounting block- he had a ton more swing in his back and went straight to the being on the bit as I shortened my reins. We repeated my ride from Wednesday in structure and movements. The trot 10m circles were MUCH better. There was no discussion about the starting bending, he just went with it. I may have peeked a bit over my shoulder and looked at the bend he had through his body. He's such a little guy, I can peek over a shoulder and see where his hind end is at! The school the previous day may have helped, but I didn't have to keep after his outside hind as much as I usually do. The leg yields were MUCH better. He tends to get slow and stale in them, but he was quite happy to keep the forward motion and cover just a hair more ground. He was a bit distracted for this ride- the horses came in a bit late for dinner because of the nice weather. He had quite a lot of motion in his back in the trot, more than I've felt in the recent past. The canter was forward and very comfortable.

This won't be Penn's last massage! K was wonderful and identified tense areas without me having to tell her where (I did ask her to spend extra time on the SI area). Penn definitely enjoyed it. K was very affordable too. The massage ended up costing a little less than I thought, but I ended up spending more than I expected because we did some patches too. I don't care. The horse feels good.


I'm very interested to see how the show this weekend goes, and how Penn feels after a chiropractic adjustment Monday. I think we're on the right track!
Posted by Codex Dressage at 11:40 AM