Braiding How To: Sew-in and a Long Mane Solution

When I went to the barn Sunday, I popped a couple braids in Penn's mane and took some pictures. I'd need another person there with me to video, but I uploaded a ridiculous number of pictures so hopefully it's enough for everyone else to get started! Unfortunately nothing of the forelock, I'd really need someone to video it. I'll try to describe what I do though.


First, let's go over what I use to prep manes:

I bought the Smart Tails rake to "pull" my last horse's tail. He had some weird longer, but not full length, hairs near the top of his tail that didn't move with the rest of it. I really like the neat look that a pulled tail gives. I refuse to pull the tail, and I found the rake a very nice alternative. It also worked in cleaning up Penn's stupid short dock hairs that insisted on growing straight out.

The other items in my braid kit (well the kit is much bigger, but these are the ones that see the most use):


Alright, on to the braiding (shown in an obscene number of pictures)! I like dirty manes (but not as dirty as Penn's mane is in these pictures!), and make sure there is NO detangler or any conditioner in the mane.


Whew! That was a lot of pictures. Anyway, I always do an even number of braids for a mare, odd number for a gelding. Just something I latched on to when I read Grooming to Win about 15 years ago. Anyway, english horses' manes should be on the right, western horses' on the left. Another thing I've held on to from the same book. I can't let it go, so I had to train Penn's mane over to the right.

Alright, so how do you take these braids out without wanting to shoot yourself in the face?


This sew in braid is super flexible- it works well for longer manes, thin manes, thick manes. I haven't met a mane that doesn't take it well. Mind you, thick manes make thick braids, however they're all usually even.

What about manes that you could do a running braid? Glad you asked! One of the boarders brought in her very long maned (and thick maned) horse and I asked to borrow him for an experiment. (this one is for you Emma!) 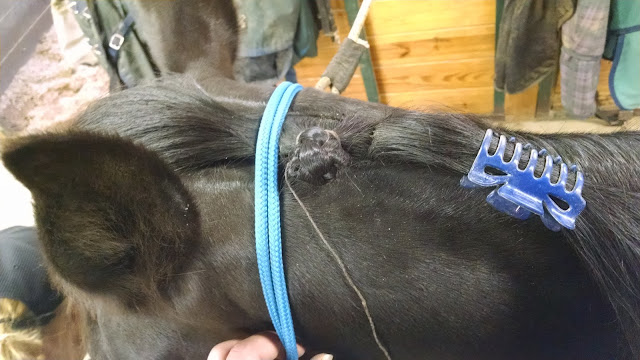 The braid didn't turn out too badly, and this was just me messing with it for 2 min real quick (I had talked to the owner right before she starting tacking up so I wanted to be out of her hair quickly).

Follow the steps I listed above with the following modifications:


If anyone gives this a try (ahem, Emma), let me know how it goes, and post a picture of it! Let me know of any other modifications you make!


Forelocks:
Forelocks can be tricky. This is what I did the last time I braided Penn's forelock. I'll try to describe it since I couldn't get pictures. 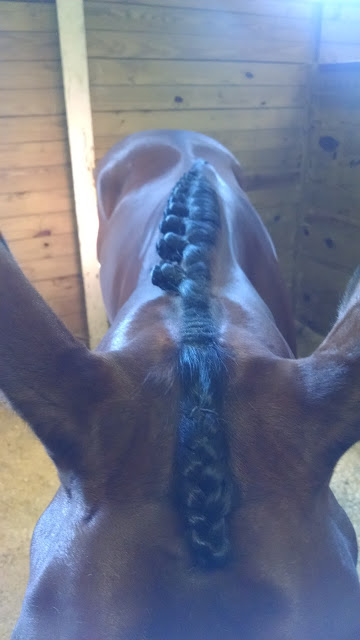 If you have any questions, ask! If my response gets too long, I'll do some edits below this line in the post. Let me know if you try these braids!
Posted by Codex Dressage at 8:49 AM

Email ThisBlogThis!Share to TwitterShare to FacebookShare to Pinterest
Labels: braiding