I found a link on Facebook to an article from Dressage Today that pretty much details my goals for Mikey's first two months back in work, and it's nice to know I'm on the right track:

My goal with his work is to build the muscle right in front of the shoulder using long and low so he ends up with a better, stronger topline overall.

Mikey is a narrow sided, ewe-necked, high whithered thoroughbred. He did not come with a nice warmblood neck that has the muscles already there in the right shape. I didn't spend a lot of time in the past building the neck up right there, partially because I didn't really know it was that important, partially because I was jumping and eventing so it wasn't that high on my list, and partially because I had goals I wanted to keep on trucking at and I was trying to make the best of the situations I was in. In our rides since he started back to work, I've made sure that as he goes along, the muscle right in front of the whithers is crunching and bulging (as much as it can). In a month's time, the thick part of his neck has come down a couple inches closer to his shoulder, and he's more consistent about using those muscles.

As the article goes on to say, on horses where the neck attaches low on the shoulder (aka Mikey), you have to work extra low at first to get them to build the proper muscle. I realized this last year when I finally figured out that he wasn't as available as he needed to be when I pushed him up. I noticed the biggest improvement when I started doing a long and low day and a walking very through day to build that neck muscle, which is now Mikey's only job. It was hard to achieve at first, but it's worth the work. It's nice to know I'm in the right direction. I figured I'd share because I thought it was neat.

I tried to employ my combination of soft inside rein, a lot of inside leg support, and a steady outside rein contact when I rode yesterday evening to achieve what the article said: impulsion, throughness at the shoulder, and a lift to the front end. In walk and trot we have it down- I can keep that lovely arch in his neck from shoulder to poll, nice and even. He's light, and a half halt is all it takes to remind him to stay that way. He's holds himself when I give the inside rein (which is most of the time as a reminder for me so I don't lock my arm and hold him), and he lowers his head and stretches when I give both reins. He needs more lift, but when my goal right now is training level work, there isn't much to be had. Transitions are tougher, as to be expected since he's not in shape and now I've got him over his topline properly so it's double hard to hold it together while transitioning. Canter is also difficult. It's his strongest gait (hello, thoroughbred!), and my weakest at being able to influence him (the poor flying changes aren't his fault).

For several steps last night in left lead canter, I finally felt that uphill jump. Not that I hadn't felt it before. I get it in the first few steps of extended canter before he falls flat. I get it when I'm really asking hard for it. I've gotten it just before he speeds out from under me. Yesterday I got it by riding him properly, giving him somewhere to go, and engaging my seat just a hair more to ask for more canter to offset riding him with a stronger core and really push him up into the bridle. What I got was a nice, light, lifted canter that engaged the right muscles and was a cinch to keep going. We got down the longside of the indoor before he got discombobulated by the short side. Now that I know the feeling, I'm keen to replicate!

I cannot express how much this quote from the article describes when I half halt and ask for a downward transition and it all falls apart, and how I asked him for a lifted canter:


The result is that every time the rider affects the horse in a half halt, either asking him to come into more collection or do a downward transition, the horse instantly takes himself out of self-carriage.

The weak links in the horse’s bridge of muscle show up immediately causing the bridge to break. The horse’s hind legs may stop as he shortens and lifts his neck while he drops his withers and back. He may stop stepping through the poll by either collapsing at the poll and bringing his chin toward his chest, shortening the neck and coming “behind the bit,” or he may become rigid in the poll as he drops his back and braces against his rider’s hands.

• The driving aids of your seat and leg send power through the horse’s topline to meet the hand.

• In response to the impulsion, your hand qualifies the energy with a waiting outside rein that says “Don’t go forward faster,” and then the hind legs take a millimeter more of a step than the front, which makes a rounder, more closed-up frame.

• In the moment of increased engagement, you start to feel the horse’s thoracic lift (see sidebar, “When the Bridge is Missing,” pg. 38). He lifts up underneath your hands and seat, becoming rounder in the base of his neck. Olympian Robert Dover says that the feeling reminds him of blowing up a balloon in front of you. At this point, the rider’s half halts tell his horse whether he wants more engagement within a gait or a transition to a different gait—upward or downward.

• Finally you soften your aids to allow the horse to feel a reward for his correct response and to enjoy his expressive body. He goes forward in a shorter, rounder, more pumped up and more elastic shape.

I did a little work yesterday on a shorter rein in trot and canter, just to see what would happen. I was thrilled by the push, swing, and the fill in front of the shoulder that I had. He was light, available, and awesome feeling. Most of all he felt strong. Not pulling on me strong, just an I feel good strong. 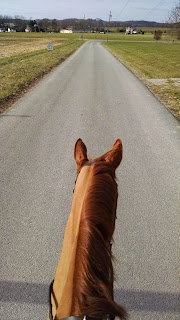 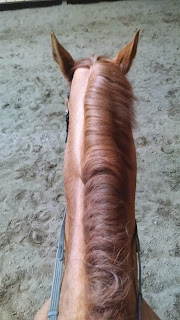 
I'm glad there's a tiny silver lining to his injury. In forcing me to essentially start over in his training, I'm getting to go back and redo the beginning work that had so many holes that were apparent in our 3rd level work that I really should have gone back and filled in. There's no pressure to get the work done because I'm going to be borrowing Cody to attempt to finish my bronze, and then there's no rush to get Mikey out on the show circuit. Maybe we'll come back and just do 2nd level work. Maybe he'll be physically fine and we can get to my PSG goal. Either is fine. A Silver Medal would be nice, but I've never won a Dover Medal either, and I wouldn't mind being a Second Level Queen and seeing just how high I can get that percent next to my name on CenterLineScores.com.
Posted by Codex Dressage at 4:06 PM