So my recap is a touch late, oh well. I'll do an abridged version. ** I just came back to this sentence after writing the post. Sorry, if this is abridged... well... then it's a good thing I didn't do the unabridged version.

Wednesday 4/22:
I stole one of my trainer's high school students as a driving buddy and we took off to Lexington, KY. We had a small nightmare when we got to the hotel and they said our reservation started the next day. Remember, when you book your hotel online, KEEP YOUR CONFIRMATION EMAIL. I was like, no no no, whipped out my phone and showed them the email with that dates. They were sketchy with me about getting me a room for the night and honoring our reservation (I was told to call booking.com to correct the error in the Hotel's system!!!). That is until the reservation manager came out to see what the fuss was all about. He fumbled all over himself to get us into a newly renovated, never slept in before room (the hotel was a disaster- it had spring renovations that were supposed to be done before Rolex. They were not).

Our room wasn't ready, so we dropped our bags in the room out of the way and went over to Kentucky Horse Park to meet up with my trainer. She asked me to bring a couple things from home (including an extra set of shoes for Cody).

We got to the horse park, contacted the dressage coach my trainer had there to find out where the stabling was, and walked right into stabling, sans passes, pretending we belonged since we were holding a bunch of horse stuff.

Noteable comment: "OMG, that person looks famous!" Yes, we both fan-girled a bit. We had no idea who we were looking at, but my 28 yr old self giggled just as much as my 18 yr old friend.

We watched our trainer's dressage school, watched Cody's head explode, and then we went for a cross country course walk with my trainer. Right up to the jumps, up close and personal. Here's the highlights:


We headed out for dinner after a course walk and settled in the room for the night.

Thursday 4/23:
We watched some dressage and visited the trade fair. Our dressage seats for Thursday and Friday were right up front and at B. Or as close to B as we could get considering the dressage arena was so far into the main arena. I got an excellent sunburn.

I promised Mikey a Back on Track Mesh Sheet if he recovered enough to go to horse shows again. I made good on my promise when I visited the BOT store. I asked if there were discounts this weekend and one of them was buy the mesh sheet (fleece, turnout, or other large expensive item), and you get a free BOT saddle pad or 4 polos. Mikey got a mesh sheet and navy saddle pad. Spoiled bastard. I love him. After almost 11 years together, he earned it.

We watched some ring familiarization after dressage ended.


Friday 4/24:
Friday was our trainer's dressage day. I didn't get any good pics, and I don't want to outright steal from the professional photographers. So check out the pic of his extended trot, then my trainer celebrating, and then crying that's in the collage at the beginning of the post. I know she's always most nervous for dressage, and it's not Cody's best phase. He can be very strong and get offended quickly, and his movement and throughness suffers. He's been much better since she got his ulcers worked out over the winter. She had some bobbles in the test: her extended canter back to collected and then a flying change- she overdid the half halt and she got a perfect simple change instead of flying. Oops. Her walk work was tense and hurried (almost breaking to trot), and then he almost flipped her the bird when she asked for halt before a rein back to canter. The stiffness into halt translated into the rein back, then he went to pick up the wrong canter lead, she stopped it, but ended up with a lot of trot steps into canter. She had some excellent moments, but ended up around 55%, not as good as she would like, but when you make 3 big bobbles at the biggest FEI event in the northern hemisphere, there's a bigger price to pay!

After her test, she invited the group of 18+ of us to walk xc again with her. Obviously not on the course like we did on Wednesday, but I still went cause hell, I'm at Rolex and it was beautiful out.


We went to Walmart after dinner to get rain gear. We were very glad that we did!

Saturday 4/25:
Let's start with the fact that the cloudless sky we had on both dressage days decided to lay down an incredible amount of water for cross country day. They were forecasting tornados and strong thunder storms, so they started xc early, ran horses every 3 min instead of 5, and skipped every break in an attempt to get everyone through before the afternoon horribleness.

In the morning we got our trainer a present: a black jump pad that had the Rolex logo on it, personalized with her name above the logo and Cody's real name below. She loved it.

We waded out to the cross country course and settled ourselves next to 4abc and the last water complex. From there we could see #2,3,4abc, 26abc, 28ab, and 29. Not a bad spot to sit. We got dumped on though, so much rain!

We watched one rider keep her foot on the gas coming up to 4a (huge rampy table), hit a long spot, the horse took off, then thought better of it and stopped, landed on the table, ejected the rider, then fell off the table onto his side. Both horse and rider jumped back up, but the horse was holding his left hind. They encouraged him to walk and he seemed to walk it off. He jabbed a front stud into the left front forearm though and he was streaming blood. That promptly freaked out one of the 4 of us standing there- a young adult who had never been to an event before and had just joined us over the winter from hunter/jumper land. She opted to watch the horses gallop in and then watch the rest of our faces to see what happened. We were all worried for our trainer, not that she couldn't do it or would take a risk, but we wanted her to come home safe to ride another day.

She did awesome! She took her time to be accurate and safe in the deteriorating footing (she rode in the second half of the field), and made sure she and Cody got home. She took every direct route on course. They owned the Head of the Lake- the rest of our group was there so they have video, but I can't get it on here!! It was an awesome, quiet, you know they're going to make it happen in a nice workman-like fashion ride. It was like they had schooled it a million times. Her cross country round was conservative, but she's never going to compromise her horse in an effort to 'look good' and make time, so she had quite a bit of time. Her conservative ride lead to a run out at the mounds. She said afterwards that he was underpowered jumping through the keyhole so he popped through it, and she just didn't see her line to the brush after. Instead of forcing a line to happen in shitty footing, she opted to canter past, circle around, and make a good clean jump.


﻿
Cody had a heel grab on XC due to the footing, but came up sound for Sunday!

Sunday 4/26:
We did some last bit of shopping then settled in at the stadium. They didn't have a good SJ round. Cody was tired, and he's not a super show jumper- he's just not as careful as he should be. A lot of their issues have come from him just being a strong horse and pulling her to the fences, then they battle over that, and hook rails. I think for this, she rode conservatively since he did have a heel grab, was tired, and  I think he was a bit different of a SJ horse than she's used to, the pulling horse didn't come to show jumping. It didn't come together for them, but they finished and jumped it all without stops. Hey, even the awesome-seen-it-all Buck make a mistake- we watched his horse run into the second jump of the triple.

She finished in last with a lot of penalties, but she was thrilled to have finished and have a sound horse to come home with.

We watched until the end and as prizes were handed out, and then hauled off to go home. I walked in my door at 12:10am. A long day!

Behind the Scenes Rolex Recap:
There was a lot that went on behind the scenes that is shaping her next trip there in 2016 (in her words: "I don't know why I thought one trip would be enough!"). The first major change is that I am going to groom for her next year. She didn't give me a choice about that (not that I'd need convincing!). There were issues with her groom this year and the groom ended up leaving sometime after XC and before SJ. Her dressage coach had an emergency and left on Friday, and the 3rd pass she got went to her farrier, who was the only one left. He became her groom. I told him he should have called and I would have hauled butt to make sure everything was set for her to SJ, but he didn't realize everything he'd need to do and there just wasn't time. The second major change is that Cody will go south next winter. Our trainer was not happy with how he felt and knows its because he was up here in the cold and snow instead of down south training. It will make sure he maintains his fitness throughout the winter. She's planning on going for a better dressage and better xc time for next year!

Anyway, Cody is currently enjoying 2 months off with lots of attention and snuggles from everyone who walks by. He'll go back to work in mid-June. At that point I'll start riding him again in prep to go to a USEF/USDF show July 10/11/12. After that, Cody will go back to event training and fitness in prep for the fall 3*'s. So much planning! 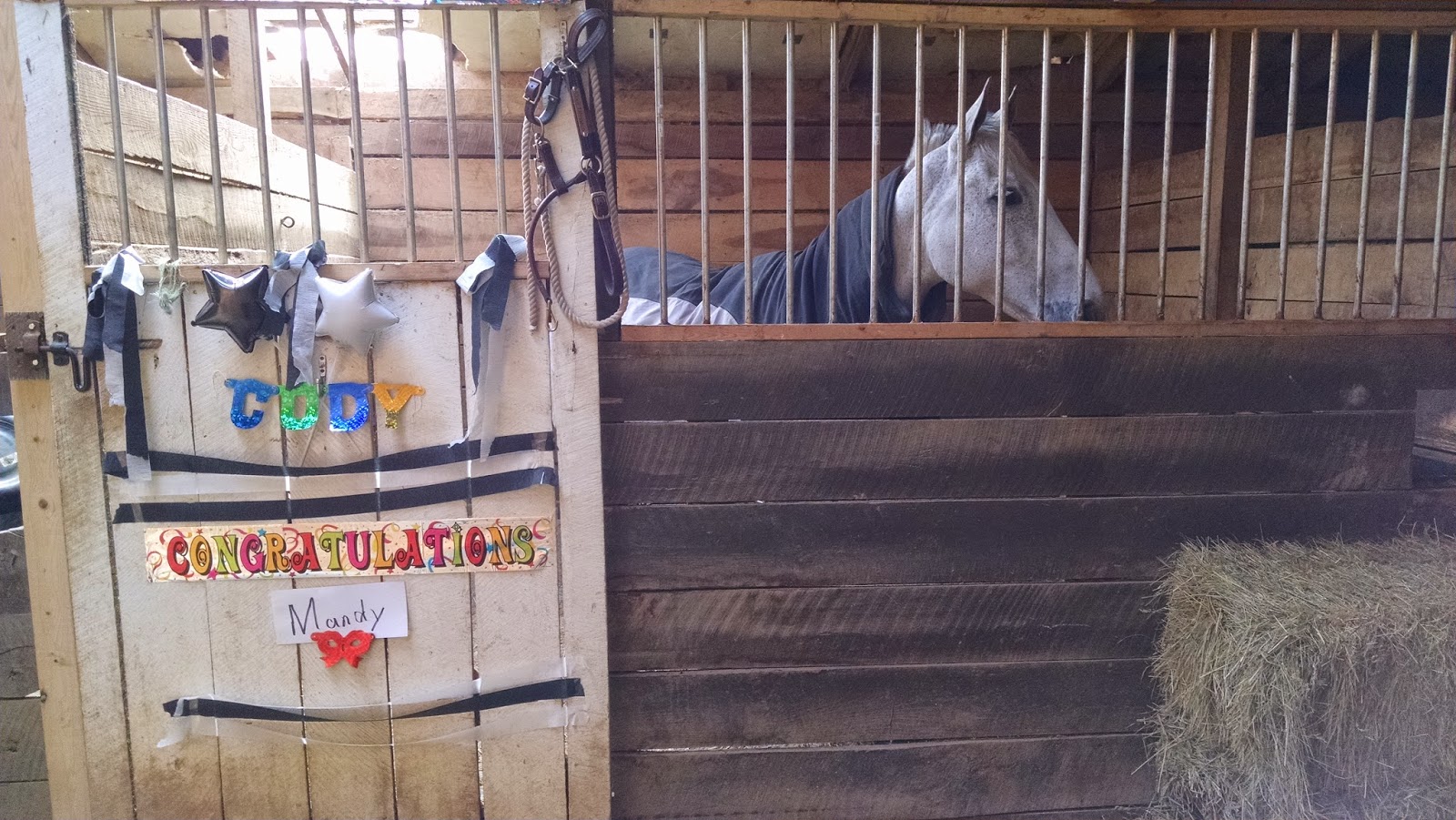 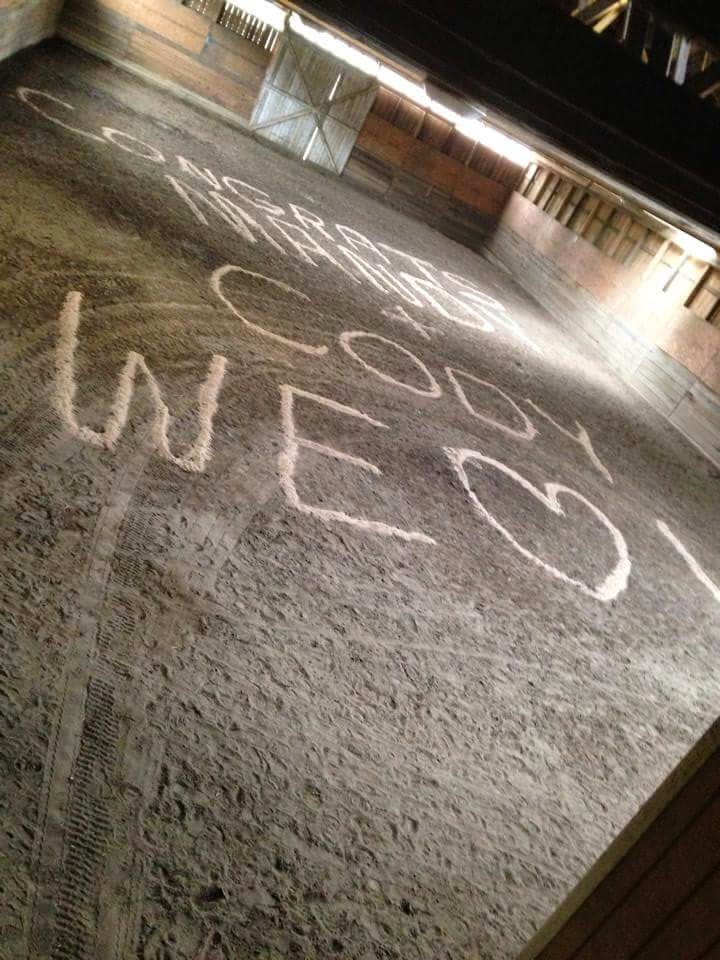