Last I saw GP Trainer, which was now almost 2 weeks ago, I told her about how Penn's trot was earthbound at the show, and that I broke the bend in trot too. Bonus for an irregular rhythm in canter. She said to warm up and see what we've got.

It was not the same horse that I had at the show a mere 4 days before, leading to this life quote (Lendon Gray's response to her question, "When should I show a young horse?" while they were standing in the parking lot of a horse show.):


"There is never a good time to go out and show a young horse. They change every day, and they might be good on show day or they might not steer that day. Most grow out of it, some never do."

Such is life with young horses.

Anyway some nuggets from warm up and the canter work:

I was so thrilled that she thought he was much stronger than the last time she saw him, and almost ready to let him carry himself a bit lower. Yay!

On to the trot ("Show me this earthbound trot"), where she first addressed the earthbound problem.


Then addressed the bend problem:

It was super cool, and super easy to get SI and half pass once I established bend first... though half pass has been easy for us since GP Trainer set us straight.


Penn was lucky enough to get a stall with a run during this visit! Very exciting. Except his stupid owner didn't bring any turnout clothes (aka anything waterproof) with us, so he had to wait to enjoy his run until after it stopped raining. 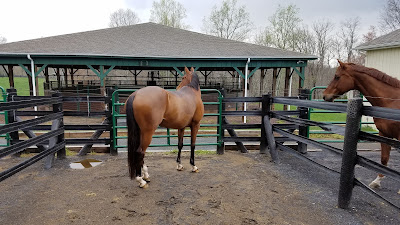 He happily munched hay, walked to the door, looked out, circled back and grab another bite, repeat. Sometimes he'd walk outside in his lap around the stall, haha. Either way, he loved the run, and I know if I ever have my own place, I'll be structuring it so every stall has a run attached.