**We're still looking into what's wrong with Penn- we think we've pinpointed it but we're waiting for bloodwork to come back. Until then, I'm going to post other stuff.**

The last few weeks of June were a whirlwind of prep- GP Trainer was coming to our barn to teach a 2-day clinic and was staying at my house instead of a hotel. Husband and I took care of all of the outside stuff that we'd been meaning to do: cut new flower bed lines to make it easier for him to mow, pull weeds, put down mulch.


My house finally got the spring cleaning it deserved too- Mom came over and between the two of us, we washed, scrubbed, wiped, and dusted EVERYTHING the day before GP Trainer arrived. I clean sporadically (I spend too much time at the barn), and so everything in the house needed to be freshly cleaned. I was just disappointed that two of the projects we started earlier weren't done: the living room update (my house has good bones and 50s style), and the gutters that were damaged by the tree that fell on the house (the contractor will be here end of July/beginning of August to put all new gutters on the whole house). 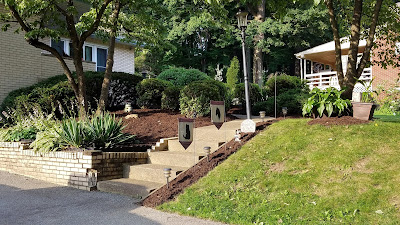 BO got the farm ready- endless mowing and more sand for the indoor. OMG the indoor is so nice now! They spent an entire day or two dragging it though- there's some lingering deep spots near X, but for the most part the footing is LOVELY!

I was first up to ride on Saturday. GP Trainer confirmed that we were all qualified for Championships (check), then asked what the plan was for the rest of the year. I said I had been playing with Penn's changes, and that I'd really like to finish my bronze this year. I stressed that I only wanted to ride 3-1 since I know his canter is not really up to par for canter half pass. She actually agreed we could do that! And there would be plenty of time to get him put back together for first level championships in September, so now is a good time. I told her I was planning on trying it at two local schooling shows before recognized- the one has a very generous judge (to give me some confidence) and the other will give me a more realistic view on where he's at.

We warmed up and she commented on how much stronger he looked than he did in May. I always like hearing those comments. I try so hard to do my homework, and every time I see her she's always saying how much further along he is.

We did more of the same work we've done in the past- reviewing the laterals and me trying not to throw him into them, using 10m canter circles to find a slow collected canter, and then we got into some new territory- flying changes! It came with the disclaimer of "He's not quite ready, but if you're going to try them, you may as well encourage them to be clean eventually." Haha!

To start (this is almost direct, word for word from the video), and explanation of the exercise and the reasoning:

Then directions in the work:

To do the flying changes:

The right to left change ended up a bit "superman"-like. Penn wants to lurch and leap through the change, so GP Trainer directed to make it quite up and down. Obviously that's not the final end result we want, but he has to learn not to lurch through them first. We took a short break and then went to the left with the shoulder-fore to renvers feeling. I cut out some of the good lateral practice work in the below video, only because Penn really needed a break and I was editing on my phone and it cut the video to 2:24 minutes from like 6 min, lol.

GP Trainer told me a while ago that the more difficult flying change, pirouette, etc would end up being the easier one in the end. The left to right has always been more difficult (I think because he struggles with the organization of the left lead), and yet since this lesson, the left has proven to be the quieter change. Still more difficult to get, but quieter.

Saturday night we had a grill and BBQ party featuring the farm's organic black pasture hog in burger, sausage, and pulled pork form. One of the highlight foods were the "adult fruit" aka apples and watermelon soaked in I believe vodka and tequila respectively. The party was a lot of fun! GP Trainer and I peaced out a bit early though- she'd been up for a long time and we had to be up early the next day to come back, and it's a 40 min drive back to my house.

I'd share the group pics we got took, but kids under 18 are front and center and I don't want to basically feature them on a blog. Just imagine like 20 people sitting down one very long table while raising red solo cups and smiling their heads off.

My lesson Sunday was a lot of the same trot and canter work from the day before, sans changes, and very similar to videos I've already shared. We quickly found that Penn was running out of gas, which was a reason we didn't touch the changes at all. All of the sit work from Saturday showed on Sunday and he was pretty tired. All the horses that did day one were pretty tired on day two!

We took it easy on him and quit a little early, and I took him for a walk on the trail as a reward. He almost stepped on a turkey hen hiding in the brush though. It blasted out from under him and he was rightly surprised. He was so tired though, he barely hopped away!

The clinic was filled to the brim- 10 rides each day! I watched them all (or all that I could since it was hard for me to watch rides directly before and after my own lessons), while running and fetching GP Trainer anything she needed. A common theme for all of the lessons on both days were working from the inside leg to the outside rein, but everyone had improved by the end of their 45 minutes.


GP Trainer got an overwhelmingly positive response, with auditors and riders alike asking, "When is she coming back?" So I'm pleased to announce she'll be back Dec 2-3 for some winter shenanigans! Of course I'll see her before then, but it will be nice to get a tune up at home before she leaves for Florida!
Posted by Codex Dressage at 7:00 AM