Otherwise known as, "that time we went and played with the Arabians of PA, part 1." (part 2 is going to be the last weekend in June)


Man, let me start off with, those Arabians f-ing BROUGHT IT. This was a small show- rides started at 8 and ended just after 4, with only one ring going. There were some open slots and several breaks. However, there was a very healthy turnout across all the levels- every level had an entry, from Intro to Grand Prix. And everyone was oh so competent and better. There were very few bad scores from what I could tell, and a lot in the mid to upper 60s. Maybe that's a sign of a generous judge, but I don't think so. Everyone was GOOD. I was able to watch a lot of them.

These were from I-2 (sorry for the crappy editing, my phone was NOT helpful in its picks of exposure):

I think Penn and I were one of two or three non-Arab competitors at this all-breed show. The show is sponsored by the PA Arabian Horse Association, and there were two days of all Arab halter/HUS/driving/breed-show-activities the days before the open dressage show.

I only have one bone to pick about this show- the lack of riding rings. The show was at a county fairgrounds... one without more than one proper ring. There was a gravel/sand pad near the ring that was barely bigger than a 20m circle for warm-up. The judge and TD made the call before the show started that the area between A and the main show ring fence could be used as a warm-up area for people on deck and in the hole. Before I found that out, I was planning on warming up in the grass on the car-racecourse. Anyway, the space they allowed was about the size of a small dressage arena on good footing, so totally doable.


I really liked the stabling, and I think it agreed with Penn nicely. The stalls were small, but they changed from wood to metal chicken type fencing halfway, on all 4 sides. They allowed an excellent breeze and Penn had a ton of "windows." He did significantly less stall walking Saturday night than he did at Morven last time out.


Speaking of stabling, this is the first time I've opted to have a tack stall. I added it to my entry after arriving and realizing how far up shit creek we'd be if the inch of rain and horrendous downpours actually happened. Luckily, I was on the end and there was an empty stall next to me! Penn's overnight stall was $50, so a tack stall was also $50. Considering I only spent $141 on his entry (office, stabling, 2 tests, drug fees), I think this show was dirt cheap and that let me get the tack stall.


I got to school in the main show ring Saturday evening, but I didn't go into the dressage court itself. There was plenty of space to ride around it and get some work done. And of course I have a ton of pics of that! Penn was all business, as seems to be his usual. 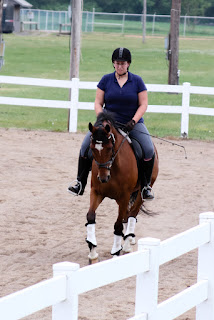 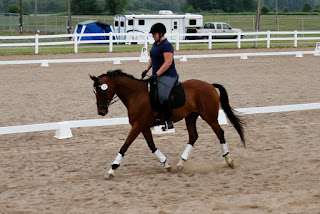 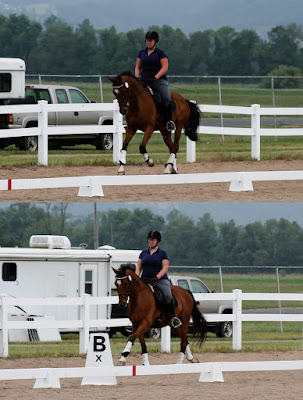 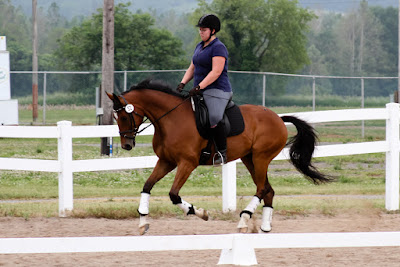 I braided Saturday night, then we tucked Penn in and went to Husband's favorite brewery for dinner (he went to school near these fairgrounds).


We got some rain overnight, but it was just enough to create some very nice footing. Since the predicted weather was so bad and seemed to be holding off until about 11:30, the TD and the judge gave the riders quite a bit of free rein- you could ride out of order if you checked in at gate check and asked to move up. My original times were at 8:10 and 11:13, however I got my second ride moved up to 8:40 or something. I think I still rode sooner than both of my times. Everyone was on a mission to get done ASAP, it was nice.

I rode this test as a mix of sitting and posting because he didn't feel like he would tolerate sitting. In hindsight, I should have warmed him up more aggressively to make his connection better, so I had a place to sit. The problems in this test were all lack of riding by me. I had trouble identifying the right track for the first leg yield. Coming past A in right lead canter, I almost let him leave. I never confirmed the line with him. At the end of the last canter lengthening and into the trot, it was just a clusterf**k because that's a bad spot for him anyway, and a rider had just entered the ring to walk down the long side, which surprised Penn.


We got my second ride time all squared away, and I made the decision to ride Penn more aggressively before this test so he had a better connection.


My aggressive riding plan paid off!


I didn't realize his hind end was trailing so badly in the first part of the zig zag- oops. I loved his stretchy trot. His good stretchy free walk seems to have gone AWOL at shows- we'll have to work on it more. I loved a lot of this work. I knew this test was better than the first test, but I was miffed at scoring less- until I really sat down and looked at the test. I'm kicking myself for letting him break in the first one loop- that earned us a 4. If we had managed a 6, the final score would have been 70%+. Darn double coefficients! I didn't completely see the break coming when I was riding... but watching it, I never established a "counter canter" and tried to pull him around the turn at X on a whim, he got confused and broke. I'm sorry Penn! But seriously, how about that final halt getting a 9?! The judge is spot on about getting better balance in canter and adjustability. Penn is just getting to a point that I can really work on it at home, and it'll come in public with time.

Penn was AWESOME this weekend. Ever since PVDA, he's felt very grown up, and it showed this weekend. Less than a year into showing and he's scoring almost 70% in 1-3 at recognized shows? Not too shabby baby horse! I guess he's not going to be baby horse for much longer. He still needs a lot of help in the tests in public, which is fine. He's still learning his job!

Oh! I also finished my First Level Rider Award! It took me a while because of the 4 different judges rule even though I now have 7 scores 60%+ at first level. It's just how the judges worked out at the shows I've been to. If I had actually ridden my first test at PVDA last time instead of letting it just go by, I would have gotten the 4th judge and my award. Oh well! I have the award now.

We were able to get everything packed up before the rain hit, except for Penn... I got drenched loading him in the rain since he didn't care to be rushed and hurried to the trailer, and so he flew backwards off it when I took a bit too long getting him latched in. After that, Mother Nature just dumped the rain down.

I'm so excited to see what the next few shows hold! We'll have a lesson this week, then a couple quiet days before shipping out to the next show on Friday.