I said last week that we have been casually looking for a third cat. We're happy with our two girls, but the house was nice an full before we lost Nickels. My husband said it had to be a male (to even out the genders in the house, bah! I wanted another calico girl to confuse with the other two, but I lost on that front). I wanted it to be another Manx mix. I love the wiggly tails!


I put out a feeler with the shelter group that we got Penny from- no hurry, but when you have a manx come through, let us know. Well they got back to me much faster than I anticipated. I thought we had a few months, but they got a brother and sister within weeks.

Side note: Please donate what you can to shelters. We met and adopted Penny through Petsmart- the Petsmarts in our area partner with local shelters to help adopt cats. Penny had been fostered and then sent to Petsmart for exposure to be adopted. This time around, the kittens had been fostered and then placed with the shelter to be adopted. This shelter needs all the help they can get- they have very limited space (that really isn't all that pretty) for both dogs and cats, and it looks like they could use things like organizational systems, more volunteers, and better building. Unfortunately, they're over an hour from me so I can't go volunteer, but I do donate to them through Amazon Smile (my parents do too!). I can't do anything about the shelter space, but I can send food and items like fans up- they are close enough to the barn that I could go on a Saturday to drop things off. Anyway, I went back to this group because they do good work in getting animals in foster homes before adopting them out- Penny was far better adjusted to house life and living with humans than Nickels was (and he came from a pretty ritzy shelter).

We went up the shelter and met the little boy kitten last Friday- he was a bit timid, but willing to be snuggled and purred up a storm. The shelter was loud (dogs barking) with no real quiet meeting area, so we thought he was probably just overwhelmed by going from house to loud shelter and having strangers take care of him, etc.

Arrangements were made for us to pick him up from a local Petsmart on Tuesday- Husband was going to cut it really close if he had to drive to the shelter before closing time. I couldn't make it to the shelter at all, so they opted to drop him off with some other kittens so we would have a little more flexibility with the timing. 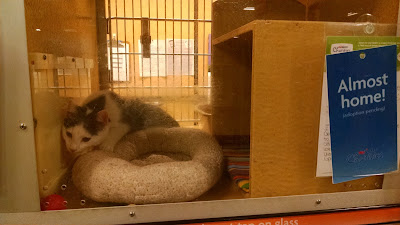 We got a couple new things for him- his information card said that he liked kitty hammocks for sleeping, and don't you know it, right in front of his cage was a scratching post/hammock combo for $26 (which I then got another $2 off because of adoption coupons!). A new tag, a collar, and his own brand new catnip carrot toy (we have a very chewed banana and pepper- they're canvas toys filled with catnip that hold up well to excessive biting, scratching, and licking- seriously, the pepper is stained because Penny licked it to the point of soppyness).

We kitten proofed the spare bedroom and put a screen door in the place of the real door. We used this method to introduce Penny and Nickels- Nickels wanted to kill her and it let them sniff and exchange smells without any danger to Penny.


Felix was super timid and scared when we finally let him out of the cat carrier. Husband and I had to sit very quietly on the twin beds in the room before he'd come out from behind the curtains or out from under the bed. He'd hide immediately if one of us moved or talked. The girls didn't help much either- Sophie wants to kill him and Penny just tags along.


Both girls came right up to the door- Sophie started her mountain lion growl and hissing. Penny was being super polite until that point. Though it was hilarious- Sophie is growling and hissing at Felix, and Penny turned and growled at hissed at Sophie!


Husband hooked up an extra back up camera to our security system so we could keep an eye on Felix while we're at work. Originally it was going to look in the door so we could see any harassment that was happening, but it just didn't work out. Instead I had an excellent view of Felix sleeping in the cat tree all day Wednesday.


He's coming around and losing his shyness- he wanted some hugs Wednesday morning before we went to work. He's quite chatty too. If he wants anything, mew mew mew mew! He's excellent about keeping his claws to himself too. I've found that cats that spend extra time with mom are MUCH better about this kind of thing (they just don't learn it from human moms). Penny and Felix did, and they seem very respectful. I'm fairly sure Sophie did too because I picked her up off the street, so that was probably self weaning instead of human intervention. Nickels didn't go to a foster home and was without his mom by 9-10 weeks old. He clawed us up like hell.

Anyway, Felix is becoming a purring love bug! He's not afraid of me and Husband anymore, and is slowly gaining confidence. He explored the house Wednesday evening - without me locking up the girls. Sophie is still growling up a storm, but it seems to be an, "I'm in charge here" type thing that she reminds him of every five seconds, not an actual "I'm gonna eat you!" type. Penny just oversees it all and reminds everyone that while they may be a little princess and prince, she's the Queen!