I was up late Wednesday night packing the trailer and doing last minute laundry (that I never used, btw). Husband did the smart thing and went to bed early. Or was it? He did most of the driving and I got to nap...


Something I tried before this trip was giving Penn omeprazole starting Tuesday, and he got it though this past Tuesday (8 days). He was MUCH more mellow about the trailer and actually ate hay while he traveled.

I hung a bucket of water in the trailer for him (half full) with Horse Quenchers in it so he would hopefully drink on the long trip from PA to NC, driven at horse trailer speed (for us that's between 60-65mph because we opted to get actual trailer tires instead of light truck, and they're only rated for 60mph). It didn't work- he didn't drink anything.


We loaded up and drove out around 7:45a Thursday morning. We had an excellent and uneventful travel day- it was cooler, and sunny up until the last 15 min of the drive when we drove through a brief shower.

You can see Senator Bob Martin Eastern Agricultural Center (that's a mouthful huh?) from the highway, and I'm pretty sure it is the only attraction in the area because it's middle-of-nowhere in all directions when you leave the grounds.


It is positively HUGE. It's set in a circle driveway- the Colosseum, covered arena, two warm up rings, one show ring, 6 mega barns, a meeting center, the RV hookups, and all of the trailer parking fit neatly inside the drive. Just outside the drive were two dressage pads that held two show rings each, plus an extra building that was basically an indoor arena warm up area (for this show) or could be converted to more stabling if needed.

It is also gorgeous. The stalls are pretty and safe. They are not the biggest, but they're good sized. They have rings on the walls to hang things and exterior facing stalls have windows. The buildings are pretty and functional. Some of the bathrooms are air conditioned (I found this out on our last day, boo). The footing is excellent and the maintenance people really took care of the footing all weekend (except for one blip I'll talk about in my next post).

Stabling was an excellent price- Wednesday night to Sunday afternoon was $165 and came with two bags of shavings. Tack stalls were $145 (and no shavings). You had to buy their shavings (pre-order for $8 a bag or at the show for $10), which I was irked about until I figured out I wanted 4 bales of bedding and 4 bales of hay... which would not have fit nicely in my trailer! I bought an extra night (Sunday night) of stabling for $60, but I got stuck paying an extra $60 for my tack stall even though I didn't need it for the extra night. Whatever. The tack stall was absolutely worth it.


We arrived around 5:45p and unloaded the trailer and got Penn right into his stall. Husband had done research and found all kinds of maps that showed where our barn was and even figured out approximately where our stalls were!

He parked the trailer, I checked in at the show office, then Penn went for a long hand graze to stretch his legs after the 10 hour drive. 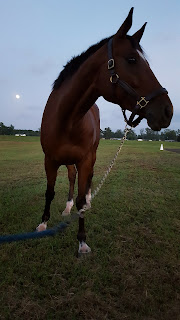 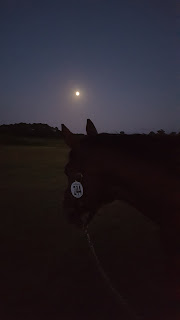 We grazed until dark, then brought him back to his stall and fed him dinner. We went to get dinner ourselves, but when we came back to tuck Penn in for the night (refill alfalfa/hay/water, clean stall, wrap legs), he hadn't pooped, drank, or ate much. He was peeing often (very unusual for him), but not always very much. He wasn't settling in at all- he was stall walking.

Cue nervous Jan. I decided to not add him to the night watch list, and if I woke up in the middle of the night that I would just drive over since the hotel was only 8 min away. I had a feeling he was fine and just needed more alone time (nervous people around him certainly don't help), and while he hadn't drank anything all day, he wasn't dehydrated and did get some moisture from the grazing.