Husband and I arrived early at the show on Saturday- I needed to get Penn fed and out of his stall to stretch his legs well before our 10:38am ride time. I heard the morning announcements (finally!) and heard that coats were waived. I debated wearing mine anyway since it wasn't going to get warmer than the mid-80s and I was riding in the morning, but I was glad I didn't. It was very muggy and buggy. I could feel the heat on my leg UNDER my boot as we walked back to the barn. An actual your-leather-boot-is-burning-your-leg feeling... that didn't go away when we made it back to some shade! Side note, I got to wear my new show vest instead! I am glad I finally have my own, and I do like it more than the vest I've been borrowing.

I went to warm up sooner than I originally planned- I gave myself a full half hour to walk over and warm up. There's a patch of grass behind the warm up area and I did all of my walk work in the grass so I could avoid warm up traffic and also not cause traffic. It worked ok- Penn had a stiff feeling in his neck (Austen had pointed it out to me too- he's a bit locked in the base of his neck) and I should have spent some time stretching him down and unlocking the base of his neck... but I needed to move on and warm up his other gaits. Still, it was more effective than the previous day's.

I keep pushing Penn out of the trot in the first lengthening!! Ugh. Struggles with connection and impulsion in the trot work again. I was very happy with his halt across the school though! The canter lacked impulsion too. I did a little overkill on the left lead one loop since that's the movement that Penn flip flopped leads on me the day before- I pushed his haunches way left and the judge took points off for it. The final trot work was meh I think, and while the halt was square, he tried to invert and flop into it.


I was super pleased with this test though- no sub 6 marks! But I was thinking, holy hell, what do you have to do to get in the ribbons at this place??? 7th again, right out of the ribbons again, but on another good score!

Anyway, how about some pictures? 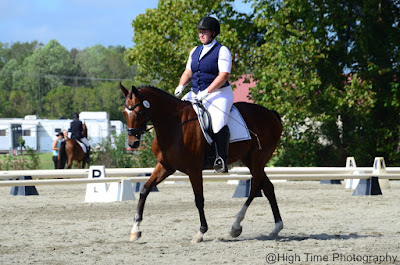 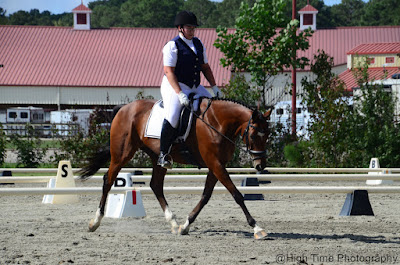 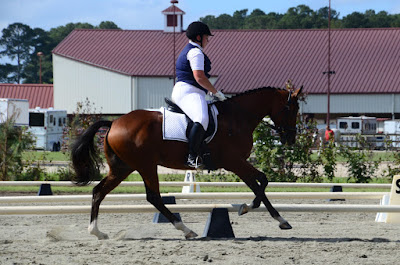 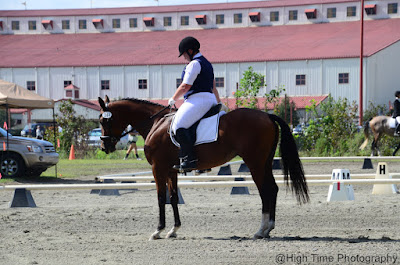 Despite only winning a 5th place ribbon on Friday and Saturday, we also picked up the Dressage Division AA First Level Reserve Championship. I feel like I probably shouldn't have gotten this- a lot of the heavy hitters that were winning my classes had numerous Championship classes to compete in and didn't enter the right sequence of classes to be eligible for the Dressage Division Awards. You had to compete in any two First Level tests on Friday and First 3 on Saturday to be eligible. Management picked a winner by averaging you higher score from Friday with your 1-3 score on Saturday. I averaged 65.897%, and champion was 66.030%, so I wasn't that far behind! I decided to not care that the heavy hitters weren't eligible, because to be honest, most of them were off competing in Second Level championships anyway and chose not to enter the classes they needed to in order to be eligible. Plus it's pretty satin and on scores that are nothing to be ashamed of!

I got to talk to Trainer after Penn was tucked in. She set me straight that Penn was doing amazing, and I had to agree with her. I told her there was nothing horribly wrong in this test, just connection and impulsion, so how do I make more impulsion overnight??? She had an interesting recommendation that went something like this:

Trainer: Are there tack shops at the show?
Me: Yes?
Trainer: Go shopping. Browse their spurs. Find one that's very square and blunt. Try a different sensation for your test tomorrow. Keep your roller spurs on hand, just in case you need to switch them back in a hurry.
Me: Awesome, shopping therapy! I'll message you pictures of what I find and then you pick something.

I ended up buying two sets of spurs- her recommendation, these Herm Sprenger spurs: 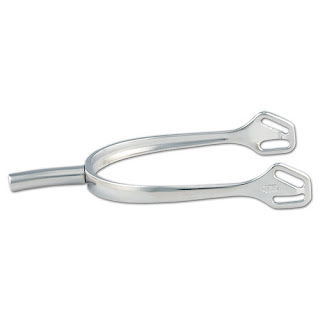 As well as a smooth rowel spur made by Centaur. They had the tiniest rowel and I was intrigued (and they were not expensive). I knew Penn would react to them, but I wanted them on hand if he didn't spice up on the blunt spurs. I have a set of smooth rowels, but they're in retirement because they don't spin freely. They were neat, and I haven't used them on Penn, but they're a good item to have in my arsenal of tools.

After my buying spree, I took out Penn's braids then went to the main ring to watch a bunch of musical freestyles in the afternoon on Saturday. I caught the tail end of the I-1 freestyles, and then the Grand Prix freestyles!


OMG guys, kudos to anyone who rides the FEI levels, and kudos to anyone who does freestyles at that level. No judging on any failures that happened. These people were still so good. There were five GP freestyles- two AA and three Open. I wasn't able to put a percent on any of them, but I did rank them in my head and came out with the right placings! I felt so bad for the only sub 60 freestyle- her horse did not want to play with any of the tempi changes.

I got to see Lauren Sprieser's freestyle (which won on a 75+%, 5% more than second place), and holy cow guys. I am so impressed. These people were good, but she blew it into another league. All of the freestyles were so good though, it was great just to watch them.


I wanted to stay for awards, but Husband ushered me out (as was our plan), I checked on Penn to give him dinner and make sure he would be good for a couple hours, and then we drove to the beach at Nags Head, NC! 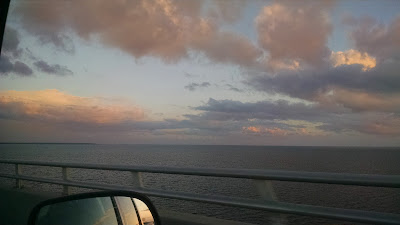 Husband and I had a good time walking on the beach (and getting wet because the waves were rather aggressive) and then we found somewhere to eat around 8:00pm... and it was still an hour wait for a table. The food was worth it though!

It made us really miss Hilton Head, SC though. We went to HH for our honeymoon and for a week the year after we got married. We like the atmosphere of the island a lot better than Nags Head, as well as HH's white sand beaches! Oh well, we had a chat before we left about house projects vs vacations, and well, it'll be at least 3 years before we can afford to vacation (horse shows and his car stuff come first). So we were just happy to visit a more southern beach!

We wished we could have stayed longer, but we had to drive back since it's an almost 2 hour drive and we had to do final night check on Penn, then try to get some sleep for the next day: championship test day!
Posted by Codex Dressage at 7:00 AM