We left off with a nervous Jan tucking Penn in for the night. I shouldn't have worried much, when we arrived the following morning he was very chill. He had laid down in the night, ate half of his hay, all of his alfalfa, had drank a bucket of water, and pooped and peed plenty. He was back to peeing normally. I was so excited that he seemed just fine that my husband was like, you're being extra horsey-weird. Strange things make horse people happy, you know?


The morning was uneventful. I signed up for pictures, Penn got a bath, graze time, then braided. The photographer had an excellent deal going on- a link to download all of your pictures for $100. That's one of the better deals I've found. He was quick in getting the links emailed to us as well, and he uses SmugMug to do prints (my husband used them as well). His people took a number of excellent pictures- I may see about having Smug Mug do proper prints for a couple of them.

I got on about 20min before my first ride at 1:57 pm, which wasn't quite enough time. Penn was VERY dull feeling. Not lazy per se, but tired and wanted to lay in my hand again. I needed a little more time to get him jazzed up.


Everything was a bit of a struggle to get done in this test. My head wasn't in the game for it because I haven't been preparing First 2 all that much. I use the leg yields to warm up and that's about it. I had a huge brain fart during it and mostly just went through the motions, accuracy be damned (like the final canter/trot transition- I forgot it was at M, not C). I wasn't planning on riding this test at this show, however I needed to ride two First Level tests on Friday (in addition to 1-3 on Saturday) to be eligible for the dressage division championships.


All the comments were right on, more power needed. Yupp. But you can tell the quality of horses and riders who were showing this weekend- a 65.4% only put us halfway in the pack.

And here's an obscene number of pictures. The photographer managed to grab every good moment! The pictures are courtesy of High Time Photography. They came to me with watermarks, but unedited, so when I cropped them, I sometimes cropped out the watermark... I guess I should have put the watermark back on... but I'm telling you all where the pics came from instead! 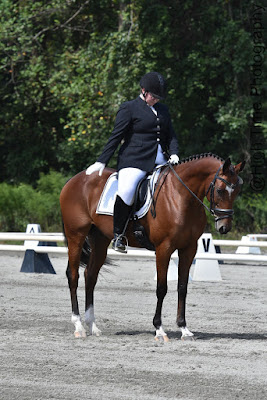 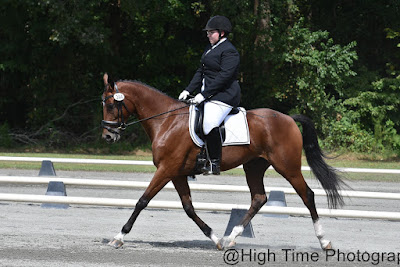 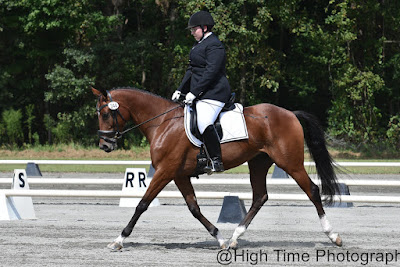 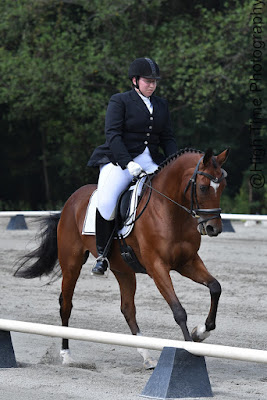 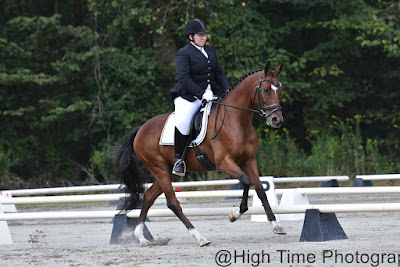 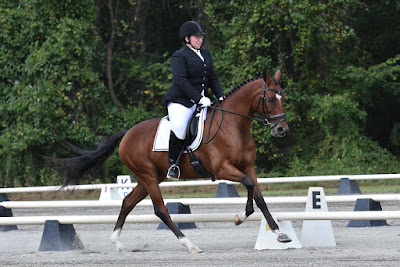 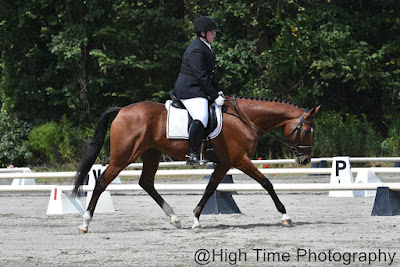 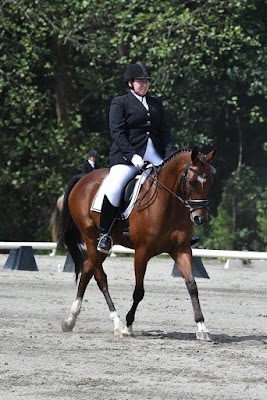 My second test was at 3:20pm, so an awkward amount of time later, I tacked up and went back over to the non-championship rings to warm up.


I wasn't all that happy to warm up in an indoor/covered arena then go outside to show. That doesn't work well at home, why would it ever work well at a show? Penn is usually gawky in the indoor, then tense in the outdoor. To make matters worse, my ring was running behind so they decided to catch up during the water/drag break... they sprayed water into the ring instead of driving over it and evenly watering, then they opted not to drag afterwards... which left puddles in the places where 4 hours worth of test riding created ruts and tracks. They told me they were going to do that when I checked in, and I was like "No problem!" I used to event, the footing isn't perfect. Well Penn does not share my mindset. He likes perfect footing. Coming out of the indoor to show outside, where you can see/hear the highway traffic, and have puddles in the ring? Way too much atmosphere to put together a solid test.

Really not trying to make excuses here but there was extra water on centerline (so wiggly centerline), then there was a puddle at H... which basically messed up each movement near H. Also, I guess I botched the correction for when he lead flopped on me? I know I got lost in it, I went to go to walk and canter from walk like I do at home, but then I changed my mind since that's not part of this test... oh well, a 3 on that loop. Oops. Another interesting thing, the ring next to me was using a squeaky toy as their bell.


This test was just a bit of a mess, sooooo I guess I earned that 62%! 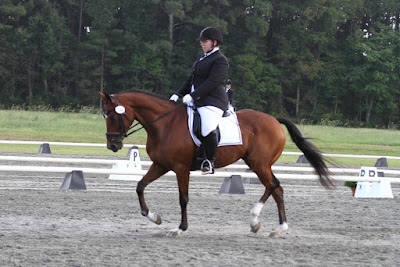 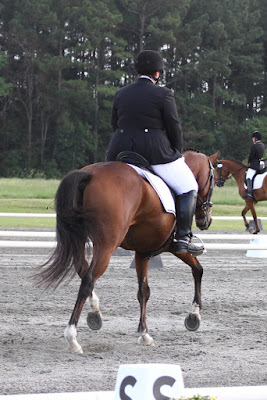 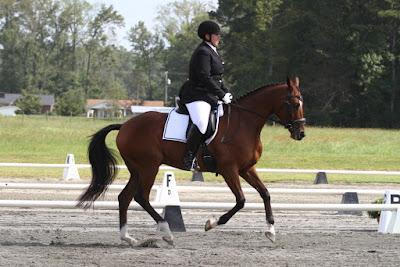 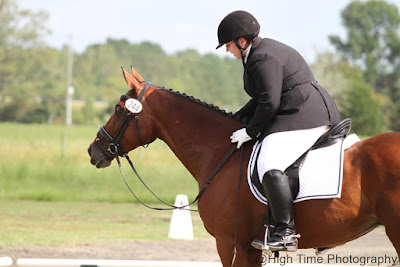 After we put Penn away, Husband and I went to the Colosseum to watch the more advanced tests. I think there were musical freestyles going on, but I don't remember what level. The Friday night Sale Exhibition was after and that was kind of fun too since there was a pair of cremello Morgans featured.


Penn went for a graze near Saturday's show ring before Husband and I went to dinner.


Husband and I had excellent steak dinners from the place across the street from the show grounds. We went to Tractor Supply before dinner and got a bag of bedding for the trailer (and had to sneak it into the show grounds under the cover of darkness because foreign bedding is forbidden), a bag of alfalfa cubes, another bucket, and a bucket strap. I'd been putting the alfalfa on the floor of the stall where it would get wasted, and he often would have some left when I put it in his feed bucket, so I got him a designated alfalfa bucket.

Tucking him in for the night was uneventful. He was much more settled when we left Friday night than he was Thursday night.