This past weekend, I packed up Penn and took him to a show all by myself (just the packing up/driving out and driving home/unpacking bits, the rest of the time I was hanging out with Austen!). It's the first time I've taken a horse so far by myself- I did the drive to the show in about 4.5 hours and then drive home from Austen's barn in a little less than 5 hours. Audible was my best friend on those drives! I've found my driving companion (when Husband can't go with me). It was really nice to make the drives by myself and stop only when I wanted (not that Husband makes a ton of stops), and then was able to completely unpack and clean the trailer without worrying about the needs of another person (aka Husband who usually needs to get home ASAP to go to bed so he can get up normal time for work the next day). 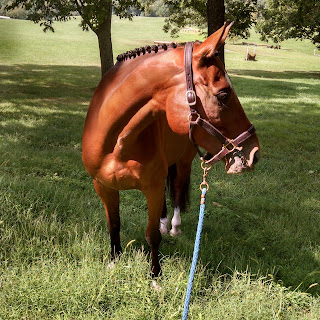 Saturday:
Anyway, we had a gorgeous weekend despite the tropical storm that threatened the show area. I left a little later than I wanted to Saturday morning, but it was all good. Penn loaded right up and off we went! I got him all unpacked at the show just in time for Austen to come back from her second ride, and to meet Emma, who is super cool!

I hopped on Penn for a quick school since the Saturday show had ended. I got to use the actual arena (yay for two separate shows in one weekend!), and he was really super. Some lookyness, but he generally got down to business. My last ride before leaving for the show was Thursday, and he was a spooky, looky bastard that kept jumping out of his skin and shooting sideways at normal barn activity: sweeping with a broom, crossties clanking, someone grooming their horse, someone riding their horse outside (we were in because the outdoor was very hard and I didn't want to abuse him right before the weekend). He got on task quickly, so I was happy. Nothing ground breaking, just ran through the things I work on in warm up, did the 1-3 10m trot circle work several times, a couple 1-3 zig zags, and then ran through all the canter work in 1-3. He had some interesting moments in the canter one loops- he'd come across X in the counter canter and would give me a couple strides with extra jump, like he was saying, "Did you want something else here? Or should I stay the same?" Just put a pin in that thought process Penn. We'll come back to it. ;-)

I showed him rings 2 and 3, thinking those were the rings we would be in the next day... oops, it was 1 and 3. Oh well. We be-bopped down at the arena with Austen and Emma, then went on a diversion to a small water complex on the XC course that was just a hair out of the way back to stabling. Penn had a good hard look, stepped in some mud, and thought that was close enough! That's not the time to press his water issue, so he got a pat for sniffing the edge and got to walk away. We put ponies away for the night and went off to dinner!

Sunday:
Penn started off the day well when he showed very little interest in his grain. Ugh. He does this sometimes, and I don't like it. He's been better lately, but it's disheartening to see him go off his grain again. It took him ALL DAY to eat it.


Austen and I visited the show photographer and the office, then went back up to take care of ponies. Guinness went for a walk, Penn got braided and then went for a short walk and graze before I had to get ready for my first test. I didn't plan well enough, I got on 15 min before my test and got down to the ring with 1.5 rides to go before I was up. Penn was still feeling good, so I ran him through our show warm up without too many hitches. He did decide that leg yields were for fools though- those were absolutely weak all around, all day long.

On my courtesy lap, Penn had a look at the stuff behind the judge's stand, so I did some walk leg yields across the short side to get him focusing up there. He responded, and all was well! I did a couple in trot down the long side for a touch of focus in the trot. I started the test off with an oops and realized much too late to fix it- I rode the first diagonal MXK instead of M-V. I didn't know how that would get scored, but I ended up with an error on that movement. The leg yields were weak. I was really happy with the canter lengthenings and transitions back to working canter- lesson stuck with us and he had much more power in them and was smoother coming back. Overall, I was really happy with the test, and I was pleased with myself for riding a much more accurate test (error aside) than I have in the past. I've been studying my geometry, and now that Penn carries himself more, I can really use my corners and plan the geometry.


So this test had a bit of drama to the scoring- I'm glad I went down immediately after putting Penn away. They had the scores up, and I had a 65.313% for second place, and I was a little disappointed because the test felt really good and very on par with the previous weekend. I went and got the paper and glanced down the typed list of scores first (they type the scores into a computer which prints out a paper with the final percent)... and thank goodness because I noticed that for movement 17 (lengthen stride in canter) I got a 0.5. I was like, WTF? Nothing I did was anywhere near that bad, so I immediately flipped to that movement on the test paper, where it was marked a 6.5. I flew back to scoring (not that I went far!), and was like, "I found an error!" They immediately stopped handing out tests and recalculated. Not only was I missing 6 points in the typo, the movement was a double coefficient so I was actually missing 12 points. After fixing the error, I was in first place with a 69.063% . They had to call back the person who collected the first place ribbon because my new score beat theirs, which sucked for them!

We had a couple hours between tests, then I saddled back up for 1-3. Penn didn't really want to play dressage pony again. He did a lot more chomping on the bit in warm up, and was over-reactive to my leg. I had to scrap the walking bits of my warm up and shift right into canter because that got Penn moving and working with me. I went back to trot where he tried to blow through me when I'd ask for leg yields. He was also notably lookier than he was that morning. They were dismantling one of the show rings (while tests were running in the other two!) and everyone in general was packing up. Maybe that was the cause of his distraction, but we did not have the smooth test I wanted. He never really unlocked his back, so I was a bit tense, so I couldn't follow his trot properly. I knew it as soon as I started trotting him- we were in salvage mode.

Huge shout out to Lauren and Austen for the videos, btw! It's always nice to have them! Second shout out to Austen who figured out how to take pics on my phone while the phone was videoing (did not know it could do that).

Penn started off his courtesy lap in a tense trot, so I walked. The trot was not helping his cause at this point, and if he was going to be looky, the canter wouldn't either. Well he stopped and gawked at the people, concession stand... and then the judge and photographer once he got walking again. I did a ton of back and forth leg yielding in walk to attempt to focus him... It kind of helped, but the judge took forever to write her comments down and Penn needed to get moving again.

He gawked from X to the diagonal, which didn't set the diagonal off to a good start. Leg yields continued being shitty, stretch trot was hurried since he wasn't relaxing, and the trot circles and halt suffered. Basically all the trot work suffered. The walk was a bit redeeming, the canter right brought in the points (yay for one loops being his strong suit and balancing point and double coefficients), and the canter left brought in a few less points than the right. Still happy with those canter lengthenings and transitions- they could have been better, but they were better than they were before! The final trot was a struggle and I lost his haunches in the turn up centerline again. I was proud that I managed to keep the geometry fairly good though!


Can I just say, what a snarky bitchy comment she wrote in the collectives? Can she not see how gawky and looky he was in the trot? Of course I'm not letting that trot out to free fall and spiral out of control. And yes, it sucks to sit it because Penn isn't giving me much to sit. But if I was sucking at sitting the trot, more than half of the riders at this show had no business sitting either! Those weren't the only snarky comments that got handed out this weekend though... Her comments still irritate me since she gave me good scores, then ripped me a new one for the sitting trot. Maybe I should be pushing him up and forward even when he's looky, geometry be damned. But I feel like a show is not the place to do it... I do that at home and half the time he counterbends and inverts and throws his shoulders around. Would she rather see that? No. I also think she was totally off base with the free walk. She said "rider restricting stretch" and I don't see it. Maybe I'm blind, but what I see is a horse not stretching and not meeting the bridle... and you don't get free walk by throwing the reins away. Maybe towards the end he stretched and I restricted, but majority of it I was struggling for stretch. I probably should have posted my lengthening trots and I usually do, except we practiced sitting them this week and I get a more uphill and less runny, if conservative, lengthen. I do understand the judge is only looking at a snapshot in time, but still, I don't think her comments at the end are appropriate.

I was still pretty happy that a test with that many flub moments got a 67.941%. And how rocking are his one loops??? We'll work on things, and it will get better. 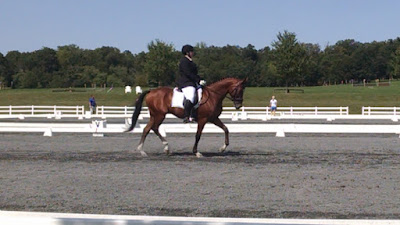 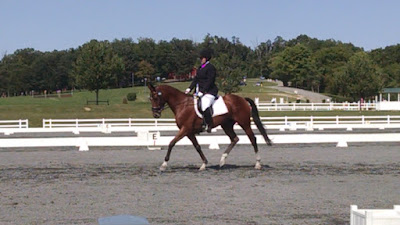 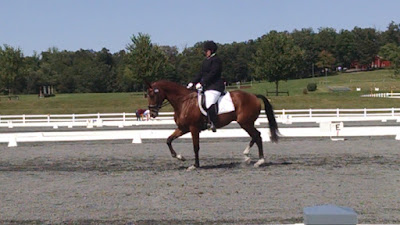 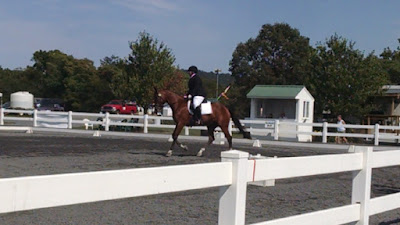 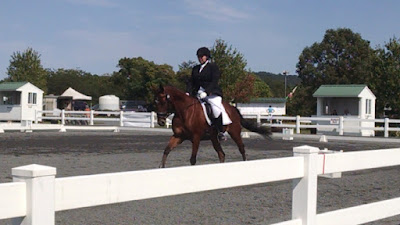 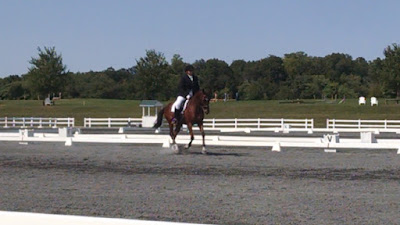 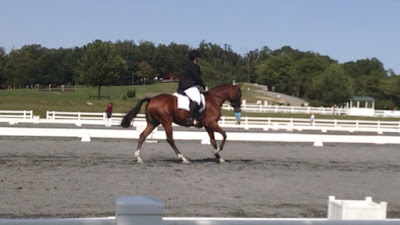 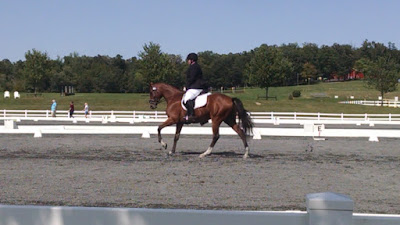 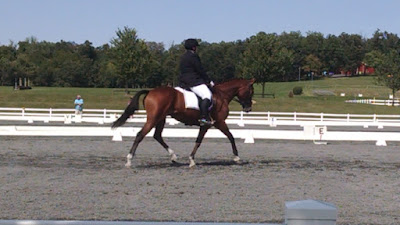 Austen and I took our good old time getting out of the show grounds (come on, there was fake apple juice to drink and photos to buy, which I'll have in about 2 weeks), and the show office eventually called us and was like, "we can't leave til you do." Oops. Well we only had to go over to Austen's barn 20 minutes away (no worries, a safe amount of time had passed after the consumption of apple juice), cause Penn and I were spending one more night away from home!


And of course I still needed to take some pictures of the barns!


I'll let Austen tell her own story, but horse showing with her is THE BEST!
Posted by Codex Dressage at 11:36 AM