I bought the 2 year old! (I actually didn't get to meet the OTTB, his owner sold him to a student before I could get there, which is totally fine. I'd assume a student buyer trumps a stranger buyer.) 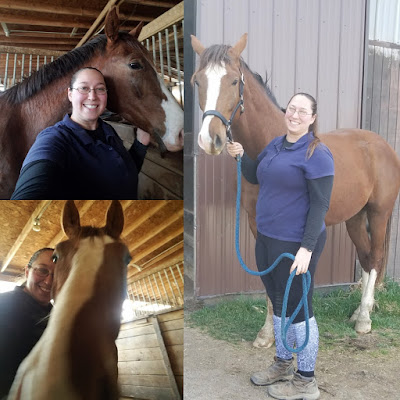 Liam is an almost 2 year old Westfalen gelding by Lordanos and out of a Dutch Warmblood mare (he'll be 2 at the end of April). He was bred by Event Trainer, and that's the only reason I considered a horse this young. I know where he came from, all of his history and care, and he was carefully planned for and cared for.

He checks so many of the boxes for me: 3 solid gaits, snuggly like Penn, shares a birthday with Mikey, is chestnut, has all the chrome, and is the floaty warmblood I could never afford. Cue emotional crying, because that is what happened when I met him and he was like "HI, I LIKE SNUGGLES" and put his head on my shoulder for snuggles and scratches.


The only things he didn't check were height and age. He sticked at 16.1h at his vetting, so I expect he's going to be 17.0-17.2 by the time he's done growing (and he needs to grow taller and wider, he looks like he's in a rather ugly growth spurt!). While that's much bigger than I prefer and was shopping for, he'll be an excellent size for me and hopefully I'll be super comfortable with it by the time he's ready to be backed and started. I'll have a year to get comfortable with him and learn about him, and maybe I won't notice him growing! He's younger than I wanted by a year, but he just ticked so many boxes for me that I figured I can do some delayed gratification. He's a possible long term partner- not something I ride to 3rd level and sell. That's worth waiting the year to ride him, and another year after that to really do something with him, I think.


I had to have a good long think when I considered him: what are my goals, how do I want to get there, and how long is an acceptable time frame to get there? Is some "delayed gratification" worth it?


Say I was able to buy, and did buy, the OTTB. He could do training level this year, and maybe in 4 years he'd be a solid 3rd level horse who can do 4-1 and can be called a 3rd Level Schoolmaster for someone who wants to learn the mid levels. Maybe the OTTB would be able to keep going up the levels, maybe he wouldn't. I would expect him to top out by PSG (doing the things and still getting 60%) if he can keep going. If he's not going to go further, I would sell and buy a more talented horse (hopefully). I redo training to third for another 4 years at least.


In 4 years, Liam will have just turned 6. I expect he'll be competent at first level, and schooling 2nd/3rd level work. I don't expect him to be further along than that because he is a big growing horse and is going to need time. I also do not expect him to top out at 3rd/4th, but only time will tell if he can handle pressure and can do the tempi work of the FEI levels (if he can piaffe and passage in any way, I consider that a bonus). I consider him a better risk than the other horses available to me at my budget, despite me having to wait for him to grow up. He's a possible very long term partnership, which is what I really want.

I feel very... blessed? Loved? -by my barn family. They are the true enablers of this adventure. Event Trainer for offering Liam at a price I can afford. My barn owner is gung ho about bringing a baby horse in. Other boarders have offered their horses to ride in the meantime: Our vet, who owns Madonna, for allowing me to ride her regularly. M offered her older, yet sassy mare, who is big moving and 17h tall so I can get used to the size, and so I have something to pony Liam from. Another boarder who offered her floaty mare so I can get used to riding floaty gaits before it's time to sit on Liam. Then the bunch of other green horses that need rides here and there. Event Trainer will help me start him. They are all the reason I can attempt this new adventure. I feel very lucky.


Is he the nicest baby horse out there? Of course not. Is he the nicest thing I could afford? You bet. He has acceptable minor flaws, and everything we xrayed at his PPE looked great and strong. He's super awkward right now, being a growing baby horse who also appeared to have hives when I saw him last. He'll be a great progression photo series!

I have super limited media of Liam right now because he's at a farm where I have to ask permission to come out (it's a private breeder's farm), and then someone usually hangs out with me while I visit him. Top that with a young horse who doesn't know how to stand still, with or without a person, and I have a camera roll full of super awkward pictures with airplane ears. That situation will be remedied in the next 2 weeks, he comes home Tuesday (aka today!)!
Posted by Codex Dressage at 4:00 AM

Email ThisBlogThis!Share to TwitterShare to FacebookShare to Pinterest
Labels: liam