My mom and I packed up and took Mikey back to OSU this past week for a recheck and APS treatment. I now have a much better understanding of what an APS treatment is because they let me watch and tag along with the students who were learning how to do it.

Tuesday was mostly uneventful, with only two bad parts:
1. My new trailer jack doesn't sit as far above the trailer tongue as my old one did. This means the two blocks I have under the foot (a 4" and 6") are much too tall, and the jack can't lower the trailer enough to get on the ball. I had to get a bottle jack to lift the trailer, so I could pull the smaller block out, so I could lower it enough to get on the ball on the truck. We're looking into a different jack since the bottom of the jack is too close to the road for our liking. I do love my new jack though. It isn't a full body workout to jack up and down.

2. It was it raining the entire drive. It took us 6 hours to get there because I was getting tired driving in a constant downpour and trying to deal with rain, pot holes and 18 wheelers flying by me. My back was killing me and I was not feeling well by bedtime.


The students weighed him when he arrived. He weighed 1130lbs, ten pounds less than he weighed when he came in for surgery. Not what we were hoping for since he's been locked in a stall for a month and a half eating. He does looked to have filled out a little, but lost topline muscle, so let's go with muscle weighs more than fat, and he lost muscle?

Mom and I got up early Wednesday to make sure we were in the vet hospital well before they took him out for evaluation, because I wanted to see him jog. We got there while they were doing rounds, and we got to hear them tell the students about Mikey's injury (using big veterinary terms I couldn't even hope to parrot back to you all).


Mikey got his turn to trot shortly after. The surgeon checked him over first, and was very pleased with the lack of infection from the incision that was still draining when I took him home, and how nice all of his incisions looked. Everything had scabbed over and healed over very nicely, and there was less swelling than she expected. Everything in general looked much better than she expected. She said I did a really good job keeping it clean and taken care of, so I passed the high praise on to my trainer. She's the one who did the work, checking on him daily and micro managing it, and also keeping OSU's directions in mind as we both rejected our own vet's wrapping instructions in favor of OSU's.

After she checked him out, the surgeon had a tech walk and trot him on the pavement inside. She said he was walking with some stiffness, which I'd expect since he spends all day in a stall and traveled the day before. They jogged him, and she gave him a grade 3 lameness, but it was very mild. He wasn't flexing the right hock as much as the left. I could barely see it. They didn't bother with the flex test, she said there wasn't much of a point as he'll flex positive the rest of his life anyway, so there's no reason to pressure the joint. As a background, he flexed a grade 4 pre-surgery and was almost crippled in his movement. Just short of 3 legged.

Does anyone out there understand the 0-5 lameness scale? I obviously don't because I don't know why a very mild lameness would hit grade 3. I didn't want to pester her with the questions about the scale since they had a full schedule and it's something I can research on my own. Is it just a consistency thing? Since he was consistently not flexing the hock as much? It was more a stiffness than a lameness I thought. His right hind has always been weak and he never bent it as much as the left. We're always after him to keep up with the right hind.

Anyway, the surgeon said she was comfortable doing the APS injection, so everyone scurried to get him prepped. They didn't need to shave his leg again as not a lot of the hair has grown back. They spent 10 minutes or so scrubbing him! As they scrubbed, they pulled a huge syringe of blood.

Before going into the process, Mikey is one of under 100 horses to get this treatment. APS stands for "Autologous Protein Solution" and is essentially an injection of concentrated protein rich plasma that has regenerative qualities into a damaged joint. His surgeon helped develop it, and here's a link to an abstract from her research, and here's a link to a PDF that has more layman terms of the experiment on page 3. He got one of the last kits she had, and each kit is a mind boggling $1500, but I got it for free. I feel very lucky.

Pardon me if I get some of this wrong but here's what it looked like how it went. I didn't take pictures even though I really wanted to. I thought it'd be rude!
1. Pull a huge syringe of blood from the horse, add an anticoagulant. Ok, so maybe not huge, it's a standard size that seemed huge to me! Looked like at least a 5 inch tube that's an inch in diameter? Huge.
2. The first part of processing the blood is how you would process for a standard PRP (Platelet Rich Plasma) injection. They put the blood into a sectioned off cylinder with some chemical or something in it, then into the centrifuge for 15 minutes at 3200 rpm.
3. Drain off the yellow plasma in the upper section of the cylinder, then pull out the ~6mL of platelet rich plasma (it's red) at the bottom of the upper section, leave the other red stuff in the bottom section. I guess those are red cells? I either don't remember that part of biology, or we didn't go into enough depth. Put the platelet rich plasma into the next divided cylinder, and smash the little beads at the bottom into the blood until they're all absorbed. They basically pull out water.
4. Put the cylinder back in the centrifuge and spin at 3200 rpm for 2 minutes.
5. Drain out the bottom section. I believe this amounted to about 2mL of protein rich blood/plasma/platelets? Not sure what, but it's super protein rich and highly regenerative.
6. Inject into the horse's joint.

They put Mikey under a light sedation and injected the full amount into the front of the joint. She wanted to split the injection- one in the front and one in the side, but she wasn't comfortable doing the side because there was a lot of scar tissue where it needed to be injected, so he got it all in the front. She popped a needle in first, and nasty orange/red fluid started dripping out. They took a little vial of it to hold on to for records. No idea what was in it or if they tested it. He got his injection and was good to go!

Mikey's care directions were complete stall rest for three days because of the injection, then he can keep walking for 15 minutes a day... but the good news is we can gradually increase his walk time! He was approved for ground driving, very light riding, and turnout again (with the help of Ace the first few times) at day 60 (the beginning of April). She said to gradually increase his workload back to normal over several months, and reevaluate him in June/July for lameness and his ability to go back to pre-injury work

Overall, he's doing much better than expected. His surgeon left his prognosis as 50-70% chance of a full recovery where he can continue to do his pre-injury workload. It took some of the happy out of his very good visit, but hopefully that's just the cover their butt percentage.

We had an easy trip home, driving in the sunshine! 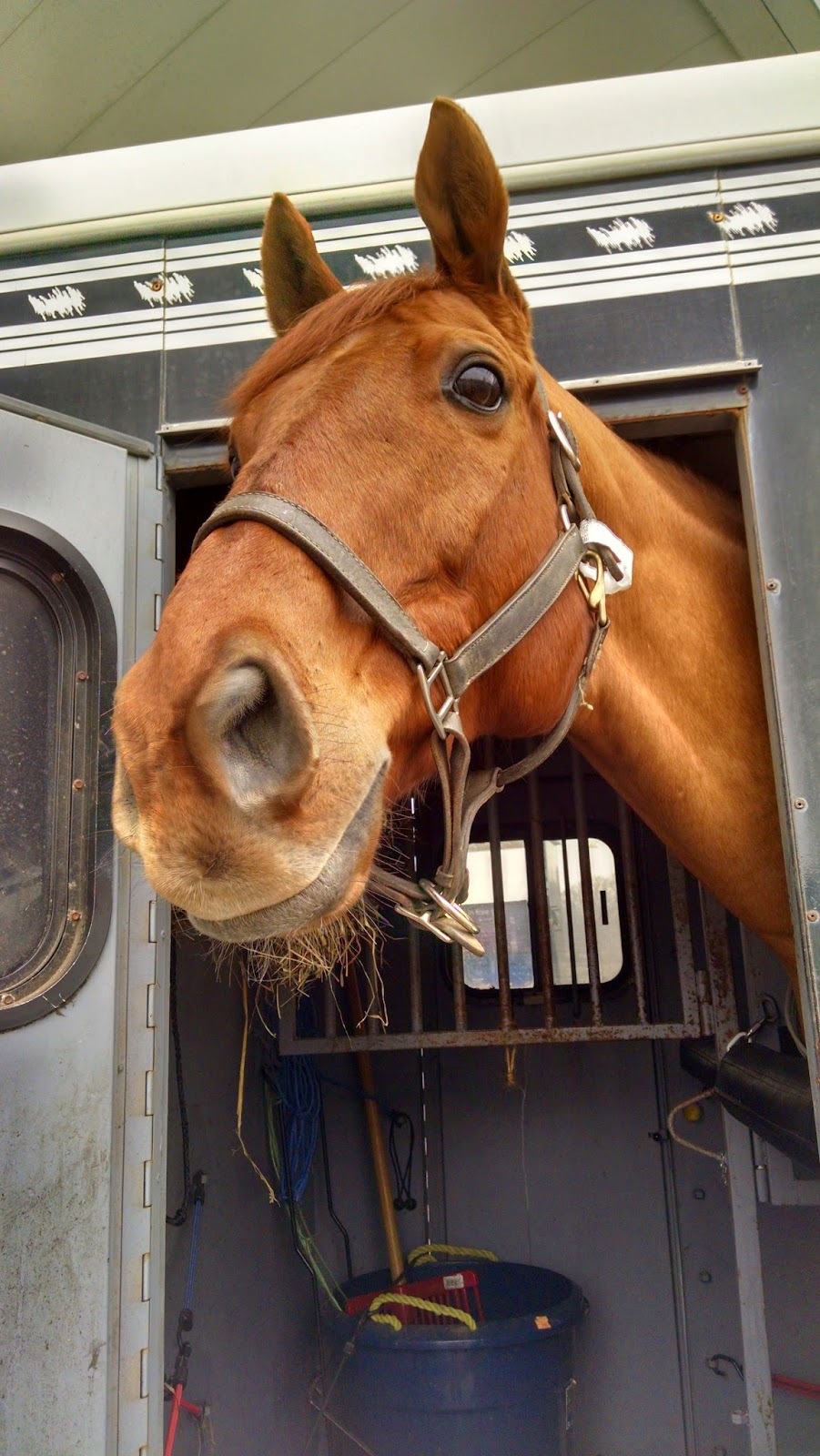