Three Days in a Row

I decided (albeit after the first two rides) that Penn and I should practice going to work in the ring three days in a row each week, through championships. I'm kind of concerned he's going to be too tired/sore and flip me the bird on day 3 of championships (the day of our Region 1 Final). As a general rule, I've been riding him 5 days a week, every ride alternating between hack/trail ride/fun ride and ring work. However, when we go to championships, Penn is going to be expected to do two tests Friday, one test Saturday, and one more test Sunday (the important one!). I don't know how he'll be on day three. I got a good idea of it this weekend, and how I should manage him each day:


I know I'm not leaving much time for warm up. To be perfectly honest, Penn either comes out good and relaxed, and at that point I'm just tiring him out, or he comes out tense and it usually gets worse, so I'm better off riding sooner. I don't always have much luck getting him to relax if he's already tense, the only times I've managed it is when I say, "F it, let's just go ride this test."

Rides this weekend actually worked out time-wise for my current plan. One goal was to simply find a warm up structure that worked, that I could ingrain in my head and fall back on in moments of panic.

I went to the barn early Saturday before barn chores to ride before it got hot... I don't know if Penn is just cranky before breakfast, or if he's that dependent on his schedule, but he was a looky bastard. I tried repeating Tuesday's lesson on Saturday to moderate success - he's already more balanced in canter and is willing to hold himself up in the one loops. I like definitely like hitting canter before trot- he's much better in trot after the canter. However, as we cantered, I eventually got angry at him for gawking and shifting his shoulders in at the jump standards that have been in the same location FOR A YEAR, and put my outside leg on and gave him half halts from hell. Holy heck, he lifted his back and responded! Every time he would gawk to the outside, I'd wrap my outside leg around him (slightly back), half halt like hell, and put a little more inside rein on to get him looking the right way again. He eventually stopped gawking and we got some good work in with the shallow loops and double small loops. He'd react every now and then, but applying that same mega half halt and he would be back on task. Trot was fine, just a little reactive... I'm sure he was jazzed from all the stimuli in canter... And from whatever was up his ass that morning.

It rained Saturday night and Sunday morning, so no skipping off to the barn before chores... I'm not waking up early to ride in the indoor when waiting a couple of hours let me ride outside!

The goal for Sunday was to run through a warm-up routine and then ride 1-3. I'm horrible at riding my warm-up properly at shows. Like, really bad. I get distracted and pick at things and get behind in my routine and ends up missing some. I tested:

I took him back to walk to mimic the meander to the show ring, then back to trot and off to our test.

I was missing some collection in the trot- my lengthenings were barely there. I was kicking on and really encouraging them along instead of letting them ooze out. The canter was lacking impulsion for sure, and we goofed the simple change. I didn't feel the wrong lead coming until he picked it up. I always have a good feel for what lead is going to happen well before I ask, and as I'm asking, but this threw me a bit because he felt good for the change. I have a feeling I let the transition get away from me instead of following through on it. The canter lengthenings were also tough and I had to really kick on for them. Overall, I was still happy with the practice test.

I got to the barn after work and saw they set up the dressage ring in the outdoor! So excited. BO's daughter is going to the show this weekend with me, so it was set up for us to practice. I was sad that it was only the small arena, considering the outdoor is 100' by 200', so it should have fit a standard ring easily. However, they haven't been grooming it out to the very edges (trying to keep sand from washing away down the hillside), and it's an oval shape, so the corners of the standard ring were off in the grass. BO is looking into fixing it sooner rather than later, but it might not happen until next spring when they can dig and put in kickboards to prevent sand from washing away (and add more sand). You absolutely could ride using every last inch of space, but it's not that important on my list to move the short side corner poles to do it. I was positively thrilled though that the standard ring didn't quite fit in the outdoor. I've been having trouble making it to my approximate centerline in the 1-3 zig zag. I was so happy that I had another 10m of forward space and my 10m estimate from wall to X was too big.

I did my walk leg yield work (zig zags) on the outside of the ring while Hawk was using the dressage ring (there's a ton of space on the sides, and a fair amount on the short sides since the small ring is set up). I went to right lead canter first, did a couple loops, change directions via simple change across the arena, then did a couple loops to the left. No double loops- Penn responded well. Hawk was done at that point, so I did my trot warm up in the ring: simply riding dressage ring corners, a couple 1-3 zig zags, then I worked the 10m circle, turn across the ring, halt at x, trot, turn, 10m circle pattern from 1-3. I always have trouble with losing the bend in the tests, so I wanted to practice.

I rode 1-3 again, even though I probably shouldn't ride it this much. The lengthening trots were much better (Penn was also carrying a good deal more collection than he was Sunday). The zig zag made me super happy since I've been having trouble making them happen in the ring that I kept in mind in my head. I decided to ride the zig zag to X even though this was the small ring, and Penn did it wonderfully. No fuss, he easily met X and swapped back. I'm no longer worried about doing it in the standard ring. I'll actually have to be careful how steep I make it! AND I might be able to make it a hair steeper so I get a couple straight strides across X before swapping to the other leg yield! I goofed the stretchy trot- he was stretching so well that I let him carry on for too long and hurried him back into regular frame. That caused a goof in the 10m circle halt circle work- he wasn't with me and paying attention. The canter was lacking impulsion again. He's just stuck feeling. It feels like he needs to let loose and gallop a little. Even so, there was a lot of jump, he didn't lay on my hand, and he generally carried himself. The simple change was excellent, but a hair inverted into the new lead. The left lead shallow loop was tough- I also rode those to almost X and it was just a bit too steep for him. I had to tap him with the whip a few times in canter to keep him moving. The lengthenings were a struggle to get and then the left was a mess to bring back- he broke to trot then hopped back into canter right away.

I think he was a bit tired partway through the test, so I don't mind the mistakes so much. He just did three days of hard work in a row! I'll take him for a trail ride Wednesday or Thursday, then some hill walking the other day. Overall, he worked for about 45 min Saturday, 25 min Sunday, and 20 min Monday. He got progressively better throughout the weekend, so I'm hopeful that he'll stand up to that kind of time frame. 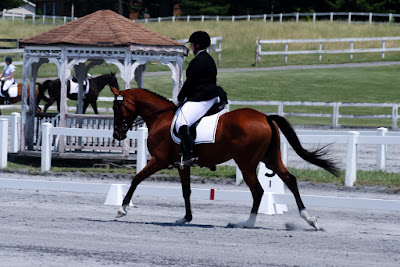 Future Plans:
Sunday is a schooling show to get back in the swing of things. Then labor day weekend, we head down to VA to go to a recognized show and play with Austen! Two weeks later and it's time for Championships! I opted not to go to CBLM Championships in Oct (you may have seen it on my side calendar). They don't seem to divide the divisions by AA/Open, just Section A/B. A is restricted, B is essentially Open. To ride in First Level Section A Championships, you can't have ridden at Third Level or above. Well, Mikey and I did, so I don't qualify to ride in Section A. I'd have to ride in Section B, against everyone else. Umm, no thanks. I the winner from Section B last year was a 76.016%, and the first sub 70% score was in 7th place. I don't need to ride against pro's on their promising young horses. Maybe I'll try again next year at Second Level because I'll fit back into Section A again!
Posted by Codex Dressage at 11:25 AM

Email ThisBlogThis!Share to TwitterShare to FacebookShare to Pinterest
Labels: training