One year ago today, I lost Mikey.


A lot has happened in that one year. Penn is here, we are going to first level championships in a month and a half.


Every day post-Mikey has gotten a little easier. At some point, Penn wasn't wearing Mikey's halter anymore. Penn started wearing Penn's halter. Nothing is still Mikey's (except the Jaguar since I still have it and Penn can't wear it). Everything is now Penn's.


I've had to sell some of Mikey's things to get things that fit Penn. The first thing to go was Mikey's TSF girth, which the company graciously allowed me to trade for a used one that would fit Penn. I actually told it goodbye as I picked the last few chestnut hairs out of it and boxed it up. It was the hardest thing to get rid of because it was the first thing of Mikey's that I had to get rid of. The first very permanent step towards moving on. It's stupid, I know. But it belonged to Mikey. 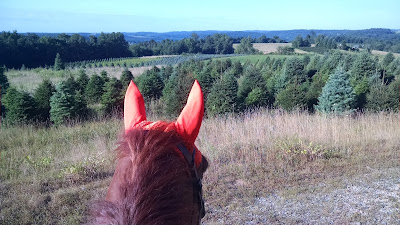 Every day post-Mikey I feel like I'm forgetting him a little more. He no longer dominates my thoughts. Penn does. I find myself thinking of Mikey less often. I don't like that, but it's probably a natural progression in healing from a sudden and tragic loss. Mikey was the background on my computer at work until May. Right now, he and Penn share an image on my desktop. I know that eventually Mikey won't be on my desktop at all- I'll get some super shot of Penn and he'll take over. 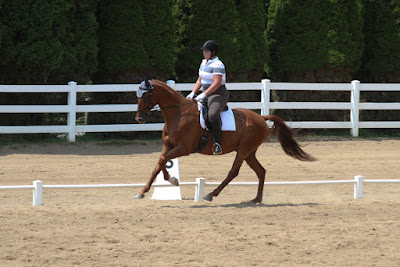 Facebook is great for the memories. It shows me all the pictures of us competing as the year passes. It's shown me some great things and made me smile to think about all the fun Mikey and I had together. Mikey even became my temporary profile picture last week.

I still can't get through the blog posts about his death without crying. I don't cry uncontrollably anymore, but I think it will always affect me. I don't look forward to tomorrow when Facebook memories brings up the post where I shared with everyone that he was gone.


Over the last year, I've been slowly adding to a huge 'what if' post with a more detailed description of what happened that night and my thoughts. It compared what happened to experiences other people shared online with aortic aneurysms.

I finally deleted the post. It had thoughts and details that don't need to be shared with anyone or remembered. It wouldn't have changed anything except damage my healing. We didn't know anything was wrong with him. Deleting it finally let me let go of "OMG, you killed him. You should have known there was something wrong with him." That's a statement that has been haunting me for a long time.

I wonder when Mikey developed his issue that caused such a dramatic bodily failure. He had some of the best ears listening to his heart and monitoring him back in February 2015 at his surgery. They gave his heart an A++ for strength and proper sounds or whatever. It's what let them continue surgery for almost 2 hours. They would have flagged it immediately if something sounded off. I asked if him being put under could have done something to him, everyone said no.

There was NOTHING we could have done to prevent it because there are no symptoms until the horse is on the ground, dead and bleeding out. A strange question that came through my mind at the time: "Ok, how do we make the blood go back in?" My brain wasn't processing that it was already too late. I was just in shock at the time and the tears didn't even start until hours later after I got home.

It was sheer luck that I wasn't sitting on him when he died because he would have killed me. I'm not saying it as an offhand remark- I'm quite serious. A rider would not have lived through his fall. I'm lucky it didn't happen when I was on him and alone- he would have landed on me and if the impact didn't kill me, waiting for someone to find me would have. Helmet or no helmet, I would have been dead.


I don't regret getting Penn so quickly. The way it came across on here seemed overly cheery for just having lost my partner of 11 years. I spent days crying my eyes out after losing Mikey. I was miserable and not about to write just how miserable I really was because I'd already said everything, and I didn't want to write one sad post after another. The first time I was happy again was when Mom and I came to a decision on Penn and I called the sale barn and said, "We're coming back to give you a check." Penn is not only the right horse for me, he was the right horse at the right time. He needed all of my attention and energy. He was so lovable and cuddly (and still is!), and he needed to be ridden everywhere. I can't imagine how dark that time in my life would have been without him.


I guess I'll go see my big brown tissue tonight and give him a big hug. We'll go for a walk by ourselves and maybe I'll tell him a little more about his big brother.
Posted by Codex Dressage at 7:00 AM