I'm trying to crank out the posts this week- I got backlogged last week when the Chiro post should have gone out, so I ended up posting a bunch late in this week! I would have gotten behind again.

The day after our lesson, Penn was scheduled to go for a walk. However, mother nature decided we wouldn't be doing that - it rained all day and for most of the evening. Now, I'm not afraid to ride in the rain, however, I was going to be riding in the rain, through mud, by myself. Not cool. So I opted to pull out the tarp and a gym tumbling mat and mess with those in the indoor.

Penn is very good at being brave. He walks up to scary things, holds his ground while he investigates, then is usually over whatever was scaring him. Well, I can't always let him look at things, and I don't want to teach him that it's ok to stop and look every time anyway. We have to find a happy medium between investigating everything that scares him and me pushing him through everything scary
I decided to hand walk him over the tarp and mat so he could investigate and be brave with me on the ground to start.

So he enjoyed pawing and biting and pulling on the tarp. Not afraid.

Then I got on and had him walk over both again. This time, he looked at them both and pulled his head down to take an extra good look. A little leg and he kept walking while he stretched and looked.


I made him stand on both, walk on both, from each side and direction. Then I asked him to walk like a proper dressage horse - meet the bridle, no more stretching down to look.


Not proper dressage horse (I can't manage in hand video and that), but relaxed!
https://youtu.be/GDWFtl-iY0g

I think this is a good way for him to find confidence in himself while I'm creating a space that he has to live in. It's like he's claustrophobic when he's traveling like a dressage horse. It reminds me of the western ranch guys who take OTTBs and train them to be ranch horses - the key step in all of their work is that horse is going to work on a long rein with no contact. They have to work it out themselves. Those horses seem to adjust really well - so I'm going to try that to make Penn brave, then repeating the same exercises in a working dressage frame. Certainly can't hurt! 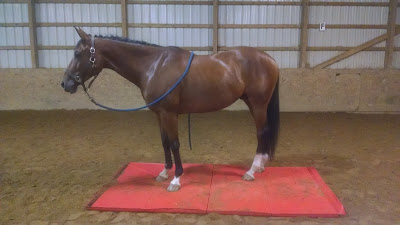 Posted by Codex Dressage at 8:00 AM